Pristine Perast and its Jewel - Conte

An amazing match of the culture, history and modern facilities - all in one small Adriatic jewel!

Perast is an old town in the Bay of Kotor in Montenegro. Situated a few kilometres northwest of Kotor, Perast lays beneath the hill of St. Ilija (873 m), on a cape that separates the Bay of Risan from the one of Kotor and overlooks the Verige strait, the narrowest part of the Bay of Kotor. The average yearly temperature in Perast is 18.3°C and the number of sunny days is 240. The best time to visit Perast, besides the summer season is early autumn or even winter. 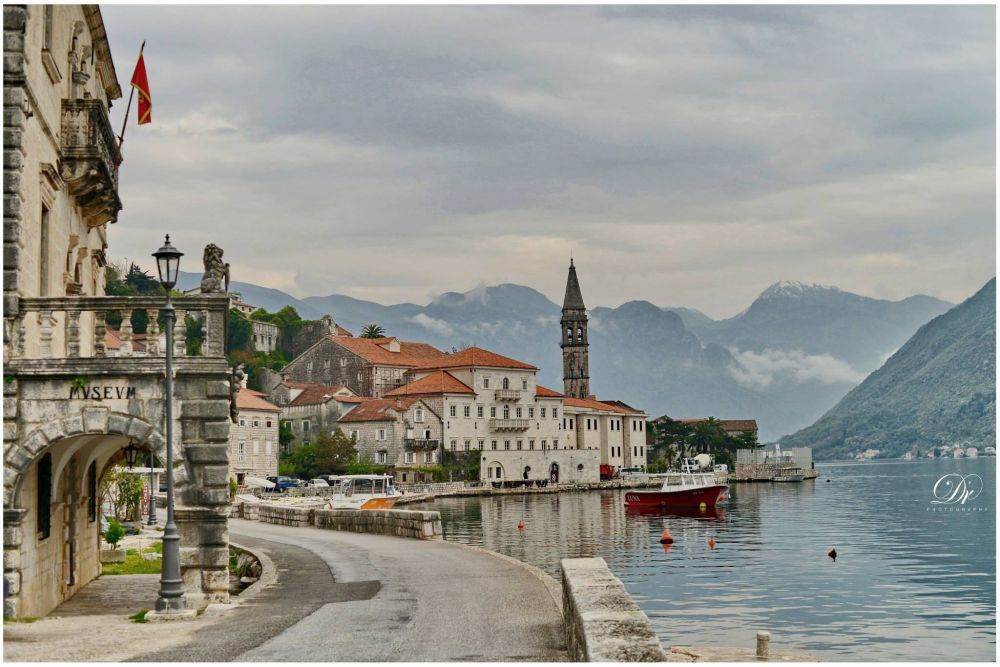 On the main square in the small town of Perast today, just by the St. Nicholas Church, there is an amazing small luxury hotel - Hotel Conte. It is situated in the former Home of Culture, so the building in which hotel is today, is actually a historically important building in it own right. You don’t often get the chance to stay in a building of such significance - well Montenegro is like that! Always something mystic and unique!

The town acquired its present urban plan and architectural appearance during the prosperous years of the 17th and 18th centuries. Although damaged by a long period of economic stagnation, the construction of a coastal road and various incursions on old towers and palaces, Perast today represents one of the most beautiful examples of baroque architecture on the Adriatic coast.

Hotel Conte kept the baroque style, so the apartments are furnished in this manner. Luxurious apartments will make you feel like part of the royal family. The only thing missing will be baroque clothes to make this idea possible! Anyhow, you can still imagine it! You can imagine those old times and create your own baroque memories! 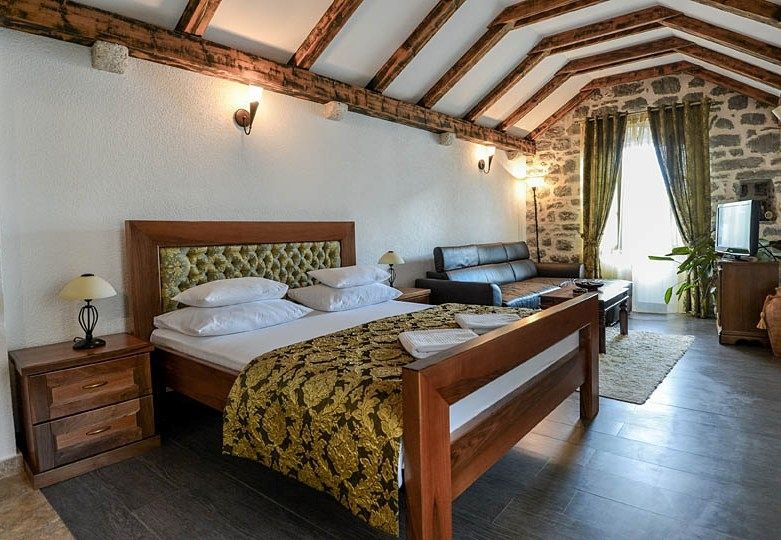 The unfinished parish church of St Nicholas deserves special mention. Its architecture, though incomplete, reveals the monumental design of Giuseppe Beati, who created a Venetian-Romanesque variant of baroque in the 17th century. In 1691, Ivan Scarpe began the construction of an impressive, 55m tall belfry (179 feet), with five stories and a divided series of loges at a cost of 55,000 ducats. Although left open to the sky, the great apse of the main altar with its two sacristies makes a significant contribution to the coastline of Perast. The church possesses a rich collection of relics, silver and wooden crosses, chalices, icons, baroque paintings and it is kind of museum in nowadays.

Hotel Conte is just few steps away from this significant and beautiful church. Actually, you can relax just on the main square, in the cafeteria that is part of the Conte Hotel, just in front of the church! Imagine your photo album with your memories from Montenegro! All your family and friends will immediately feel the urge to come here and to experience never-to-be-forgotten atmosphere! After you have finished relaxing in the shade, in front of the church of St. Nicholas, you can just move right by the sea, on the beautiful terrace that belongs to the Conte Restaurant. There you will be able to taste an amazing selection of fresh fish, prepared in the traditional way or as you like it! The rich and varied menu offers you numerous choices between fish and meat, as well as soups, starters and deserts. 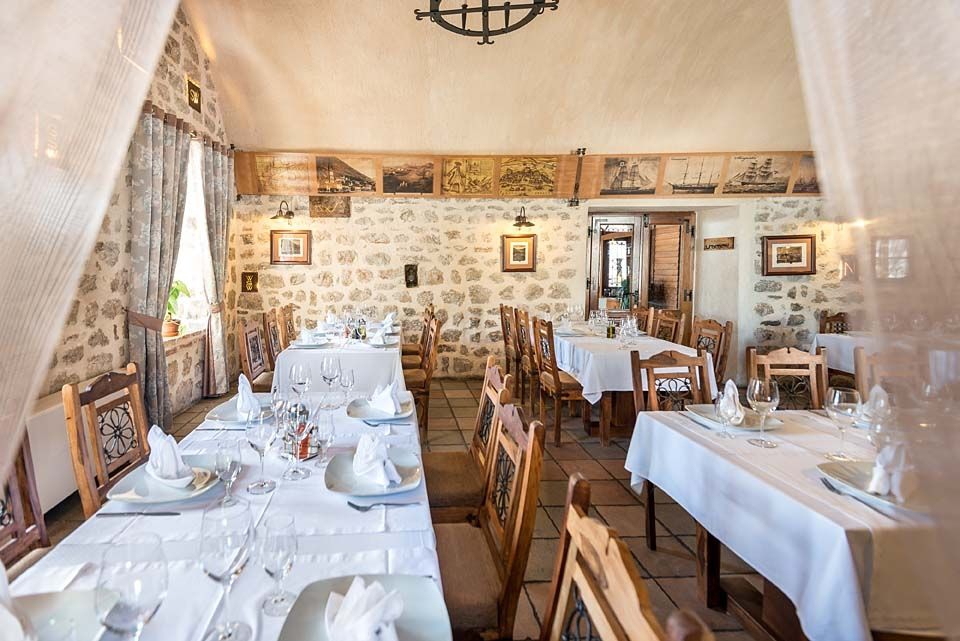 Before the Venetian Republic came to Boka Bay (in 1420), Perast didn’t have an important role in the bay development. Kotor was considered far more important because of its position, fortification and development. Kotor ruled even the Island of Saint George. When the Ottoman Empire started their conquest from Herceg Novi and Risan, Perast took a new role as a border town. Because of this new role, important economic and political privileges were bestowed on it, which the inhabitants of Perast soon used to their advantage. Despite the conflict between the Ottoman Empire and Venice, the town continued to develop culturally and architecturally.  The construction of luxurious palaces, chapels and churches, the importation of works of art and the on-going literary activity give evidence of an intense industry out of proportion to the size of the town and the number of its inhabitants.

One of these historical monuments can be your location in Montenegro! Known for its authentic ambience, Hotel and Restaurant Conte is renowned for organising and holding weddings, business lunches, seminars and many other types of gatherings. Imagine your flawless wedding in this ambiance! That could be a fairy-tale in reality!

Beside all the benefits inside of this historically important building, this small town can offer you much more! Near Perast there are two islets: one is called Sveti ÄorÄe (St. George) and the other Gospa od Škrpjela (Our Lady of the Rocks), and each has a picturesque chapel. Gospa od Škrpjela is particularly interesting given that it is the only artificially-built island in the Adriatic, with an area of 3,030 m² — it was built upon a rock (Škrpjel) after two Venetian sailors from Perast found a picture of the Virgin Mary on it in 1452. These are must-see spots, during your stay in Perast, and they will also be your first scenery to see when you look through your hotel room window! 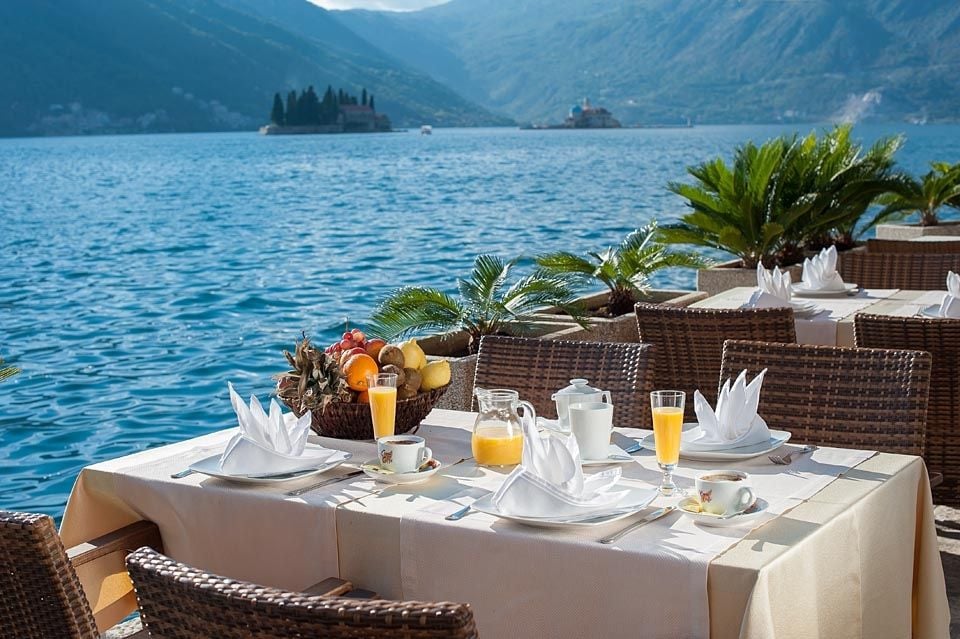