The Most Romantic Church Weddings in Montenegro

As a tourist destination, Montenegro has been one of the most popular attractions in Europe for many years. What started to become popular more recently is Montenegro as a wedding destination. Mesmerised by the charming Adriatic Sea and walloping mountains, many couples are choosing our country as the destination where they will say the “fateful yes”. Marriages registered in Montenegro are approved in most of the countries worldwide, and visa-free regime for the most European countries make it more preferable to get married here.

In our previous editions, we have written about the process of getting married in Montenegro, and which places can be your perfect honeymoon choices. Now we will write more about church weddings, and what is necessary for a church ceremony to be realised.

A church wedding ceremony is one of the most sacred and most important steps in the life of the worshippers who decide for it. And choosing the church in which you will mark the begging of your new life is as important. Most of the churches and temples in Montenegro are Orthodox, with centuries-long tradition and heritage. Of course, many Catholic churches can be found as well. Officially, the church doesn’t take money for the wedding ceremony, but the money is donated instead. There’s the tradition in the Christian world of giving/donating not only money but also other kinds of goods to the churches. It is believed that through this act of gifting, a sacrifice is made to God.

Certain pre-conditions that must be fulfilled so the wedding ceremony is valid.

Due to Montenegro’s geographical configuration and mild climate, you will not be limited in choosing the most important day of your life, due to the weather conditions. The most popular seasons are for sure spring, summer and the beginning of autumn when nature is simply breath-taking and represents an ornament itself. When it comes to churches and locations, here are some of the most popular ones.

Church of Saint Michael the Archangel in Herceg Novi


... is one of the gems of architectural and artistic design in the Boka Bay. This Orthodox Church is located in the Old Town, and with its unique and inclusive design, it captures the region’s diverse rich cultural heritage. The church comprises of Gothic, Romanesque, Byzantine, Serbian-Orthodox and including even some Islamic-influenced elements. 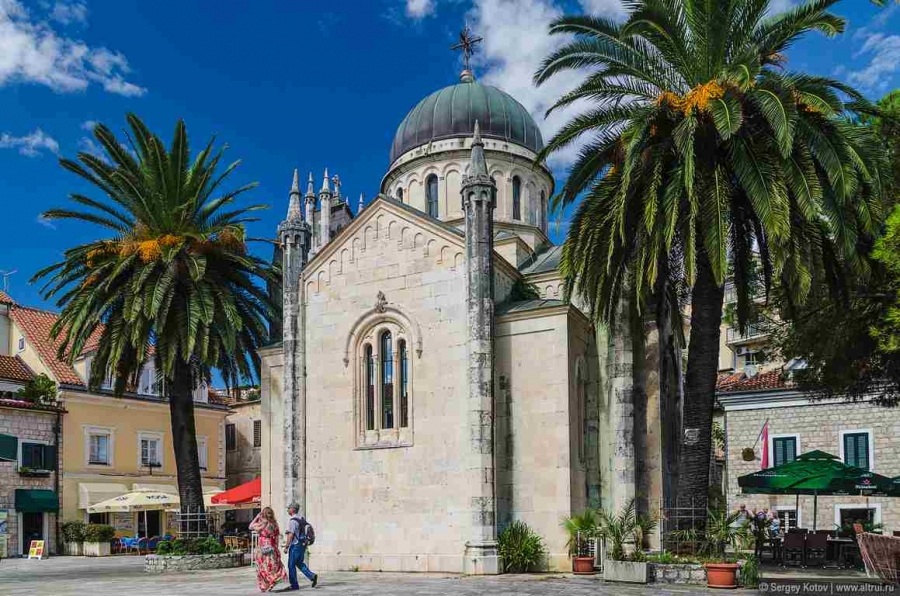 ... has typical features of the Byzantine style architecture. Located in the heart of the Old Town of Budva, opposite the Archaeological Museum, this church’s history traces back to the 18th century. Its red-white striped facade is decorated with a rosette above the western door and iconostasis of this church is the work of Greek iconographers from the 19th century. 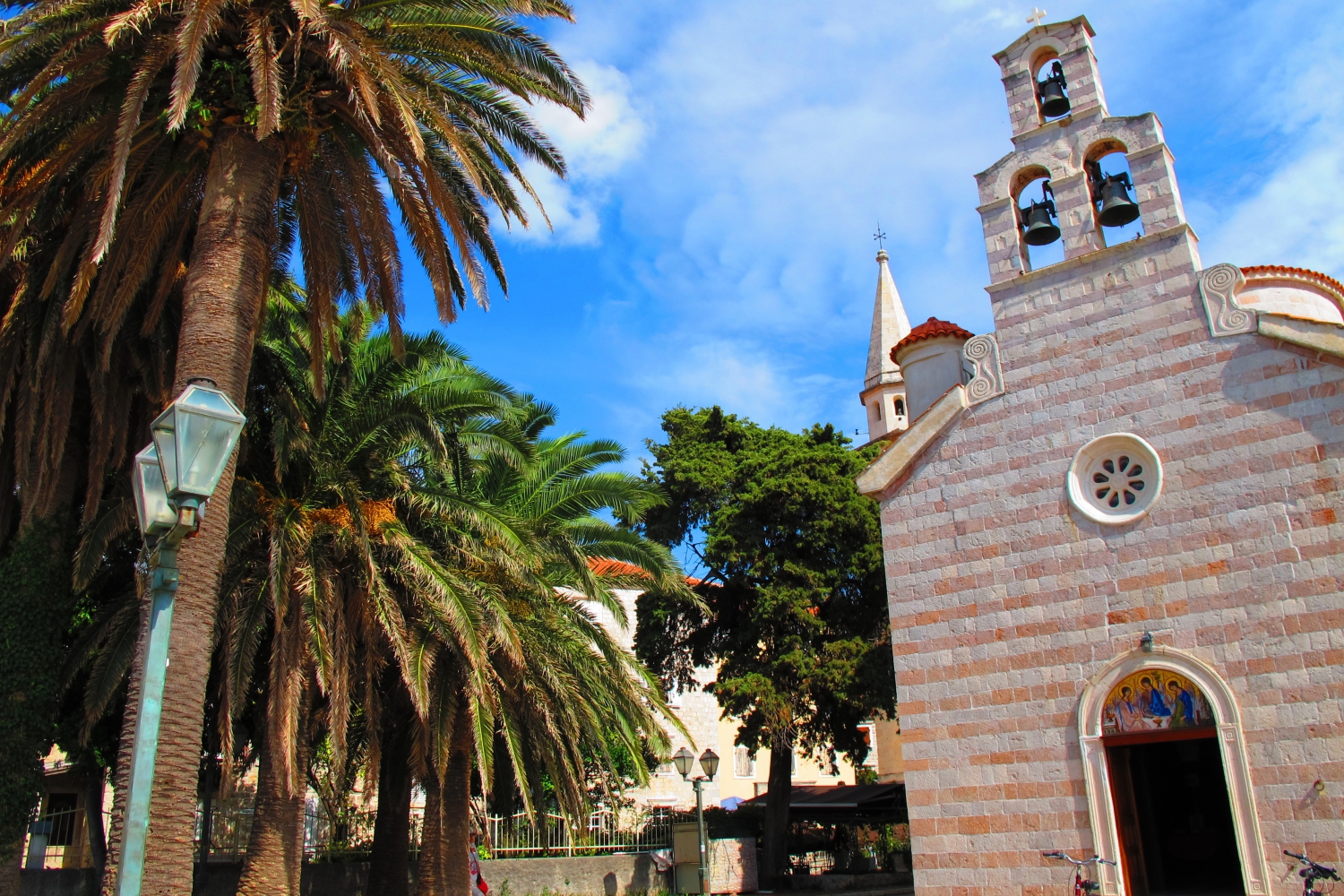 Cathedral of the Resurrection of Christ in Podgorica

... is known throughout Europe for its beauty and monumentality. It’s a new building whose construction lasted for 20 years, and it was finalised in 2013. One of the essential characteristics of the temple is certainly its artistic decoration. It is one of the largest and most interesting representations of stone plastic done on sacral objects, and it is the proud owner of the biggest (11 tons) and the smallest (3.5 kg) bells in the Balkans. 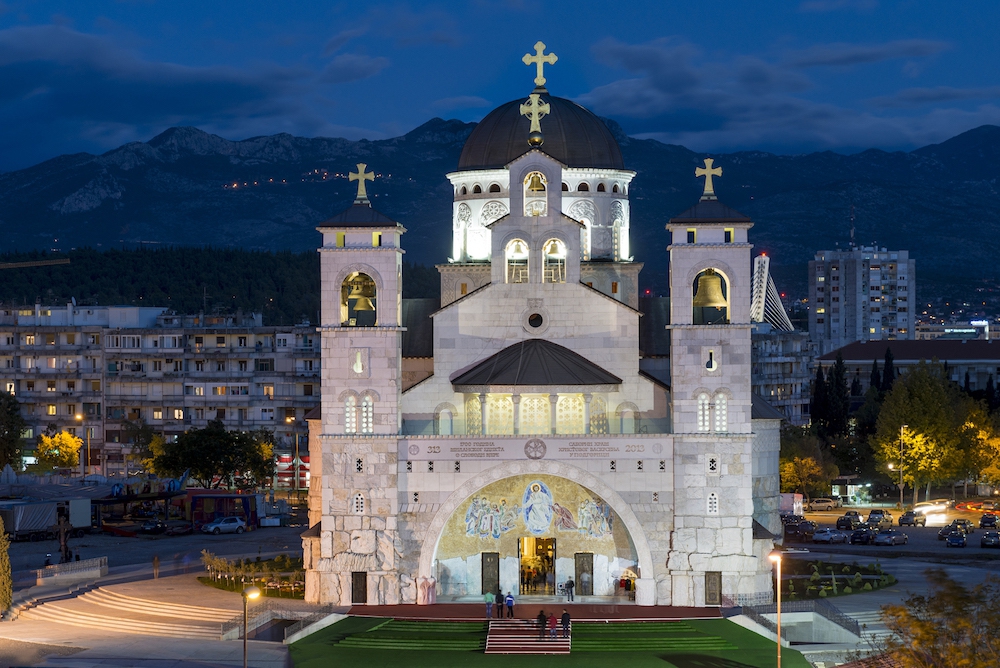 The Cathedral Church of Saint Basil of Ostrog in Niksic

... as King Nikola's endowment, represents one of the historically most important churches in Montenegro. With its artistic and aesthetic value, it has a great influence on the development of the culture in the country. The Cathedral Church of St Basil of Ostrog owns the pillow of St. Basil, the cross with a particle of the Holy Cross and the relics of the martyrs of Prevlaka. 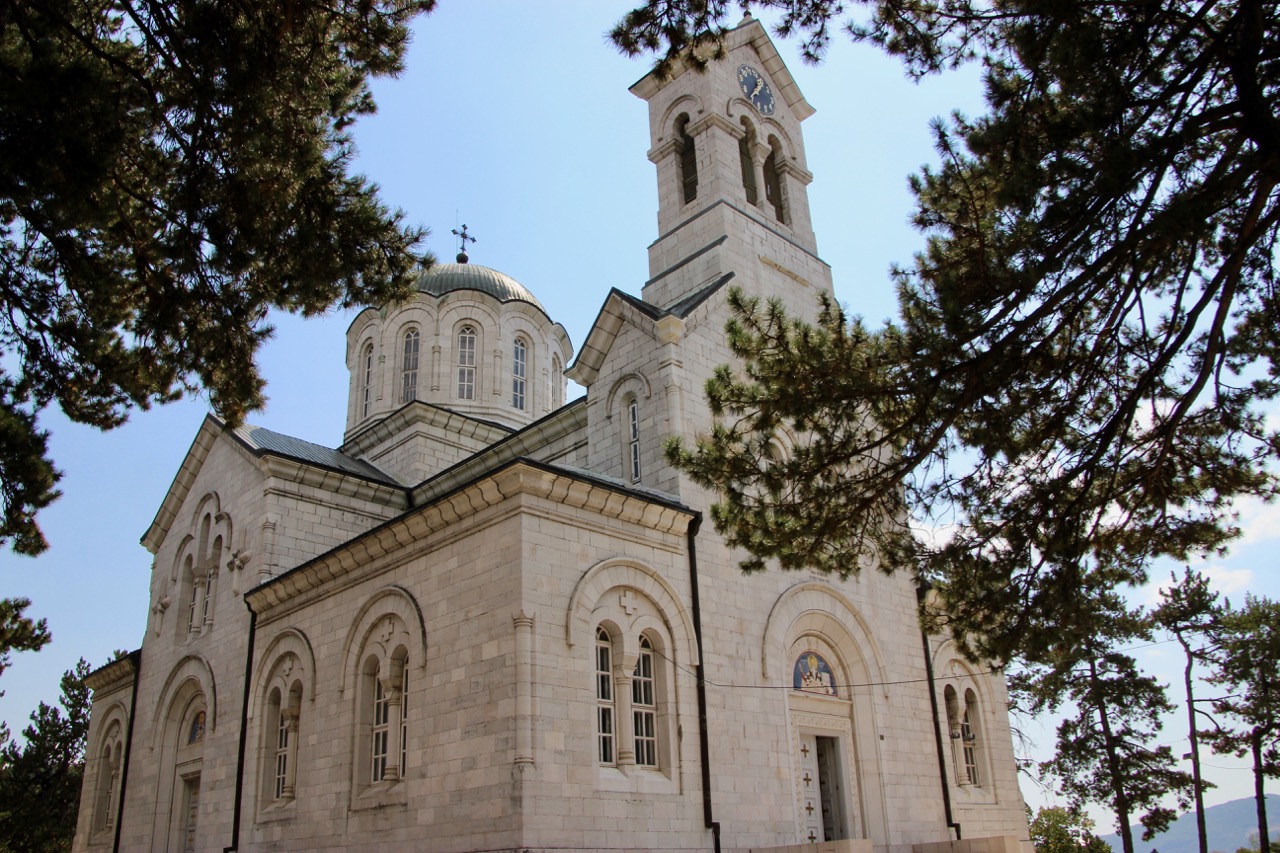 Our Lady of the Rocks

On the same-name floating island, near the town of Perast, the church of Our Lady of the Rocks is located. The church was built in 1630 by the Venetians and is one of the most important historical and cultural monuments of Boka Kotorska. The church holds Europe’s biggest collection of tamata (a type of votive offering). In addition to the well-known icon of the Virgin Mary, there are more than 2.5 million plates of gold and silver in the church, with written dates of the sailor’s departures and arrivals. 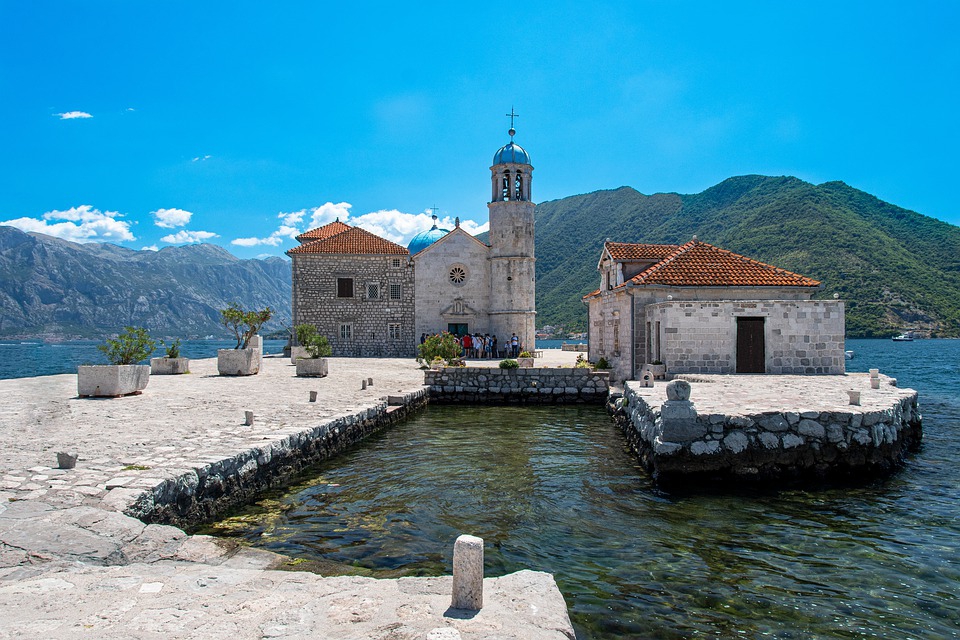 ... is a Roman Catholic Church, built in 1616. Don't let the humble facade fool you, because it hides magnificent interior decoration. This church has a particularly rich treasure house with paintings and other valuable objects from the 16th and 17th centuries. Next to the church stands the bell tower 55 metres high, which is a symbol of the city of Perast. 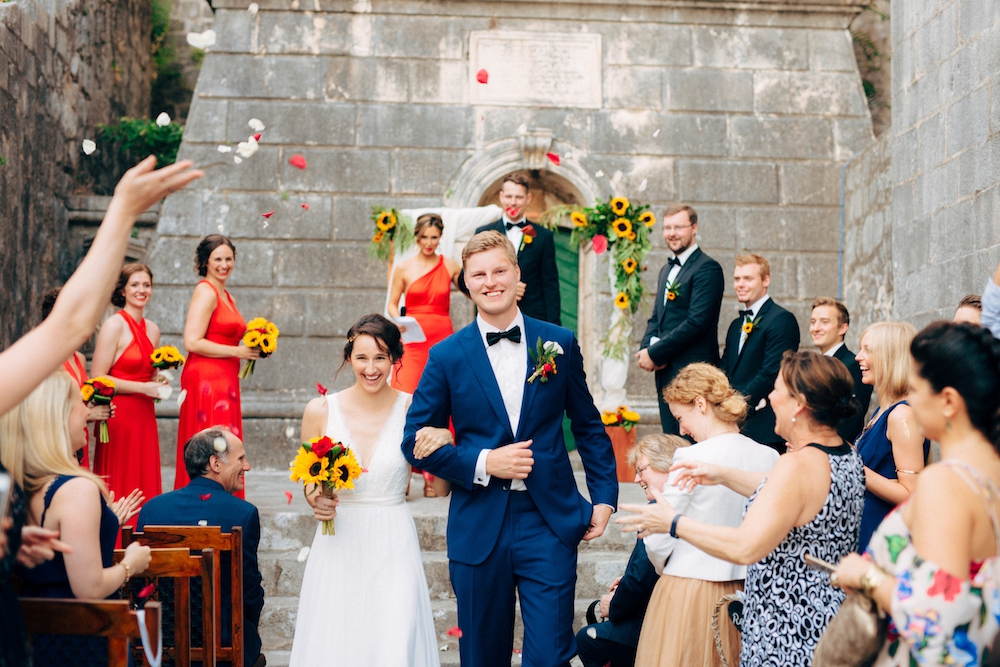 The Cathedral of Saint Typhon in Kotor

... which is one of the trademarks of this town, was built in the honour of Saint Typhon, the protector of the city. This catholic cathedral has a rich collection of historical artefacts, ornaments and figures describing the ancient rich history of Kotor. Although damaged in many earthquakes, this cathedral manages to defy the time and be one of the most visited places in this part of the Adriatic. 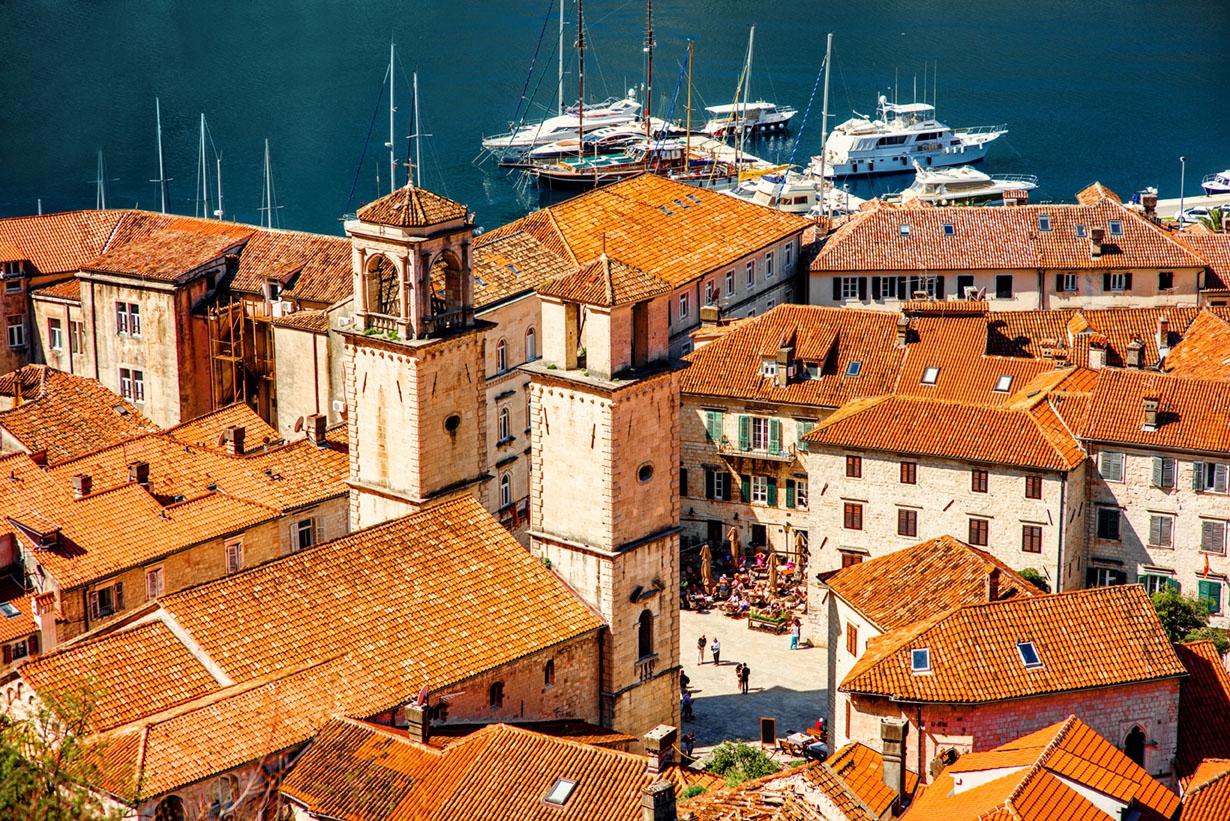 Some of the other locations we would recommend are also:

If you’re interested to find out more about religious monuments in Montenegro, you can read it here.

We hope that with our advice we have eased your job of planning a wedding, at least a little bit. If you already had your church wedding ceremony in some of the aforementioned places or some other locations, we would like to hear your impressions!
Written by: Irena
PUBLISHED: Apr 21st 2022