The most visited and most popular sacred sights

Montenegro is a multi-ethnical and multi-religious country, where equality and freedom of religious communities in the practice of religious services are guaranteed and protected by the Constitution.

Thanks to its long, turbulent history, Montenegro is rich in cultural and religious monuments. Some of the most important religious monuments preserved and built nowadays are churches, monasteries, cathedrals and mosques. Most popular ones are listed below.

Ostrog Monastery is one of the most important sanctuaries in the Orthodox Christian world of Europe. It is one of the most visited monasteries in this part of the world. The very name Ostrog comes from the older form of the word “oštar“- sharp, implicating the high sharp rock where the monastery is placed. It is carved in a vertically positioned mountain cliff, making it even more challenging and adventurous to visit. The monastery is dedicated to Saint Basil, who was believed to have miraculous powers. His holy body rests entirely in a small church within the monastery complex, not subjected to the law of rotting, for more than three hundred years. The monastery is located 15 km from Nikšić and 50km from Podgorica. Around 1 million people visit it annually. 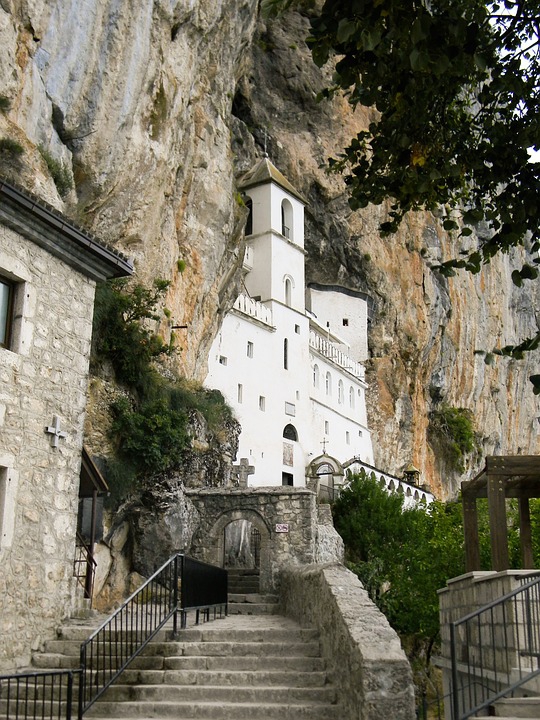 Morača Monastery is positioned on the right bank of the Morača River, by which it got its name. It was built by Prince Stefan Njemanjić in 1252, and it has a long and turbulent history. This monastery is picturesque and painted with icons and murals. The "Raven Feeds Prophet Elijah" fresco, dating from the 13th century, is the oldest and most famous fresco of this monastery. The entire monastery complex consists of two churches - the main church dedicated to the Dormition of the Virgin Mary and another smaller church dedicated to Saint Nicholas. The monastery is located on the road between Kolašin and Podgorica. 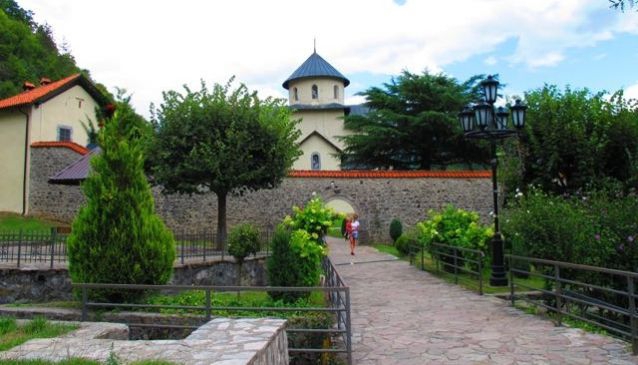 Piva Monastery is located in Plužine, near to the spring of the Piva River, where the Monastery was originally placed. It was moved from its original position in 1982, due to the construction of a hydroelectric power plant on Piva Lake. The monastery, also known as the Church of the Assumption of the Holy Mother of God, was built in between 1573-1586 by the Metropolitan of Herzegovina, Savatije Sokolović. The main part of the Monastery was painted by Greek anonymous painters between 1604 and 1606. The founder Savatije Sokolović was the cousin of the infamous Grand Vizier of Sultan, Mehmet Pasha Sokolović, and in this monastery, you will encounter “a unique fresco depiction of Savatije and Mehmed Pasha, which is highly rare when it comes to Christian churches”, just because they were Muslim. The monastery also holds the relics of the Serbian King Uroš. 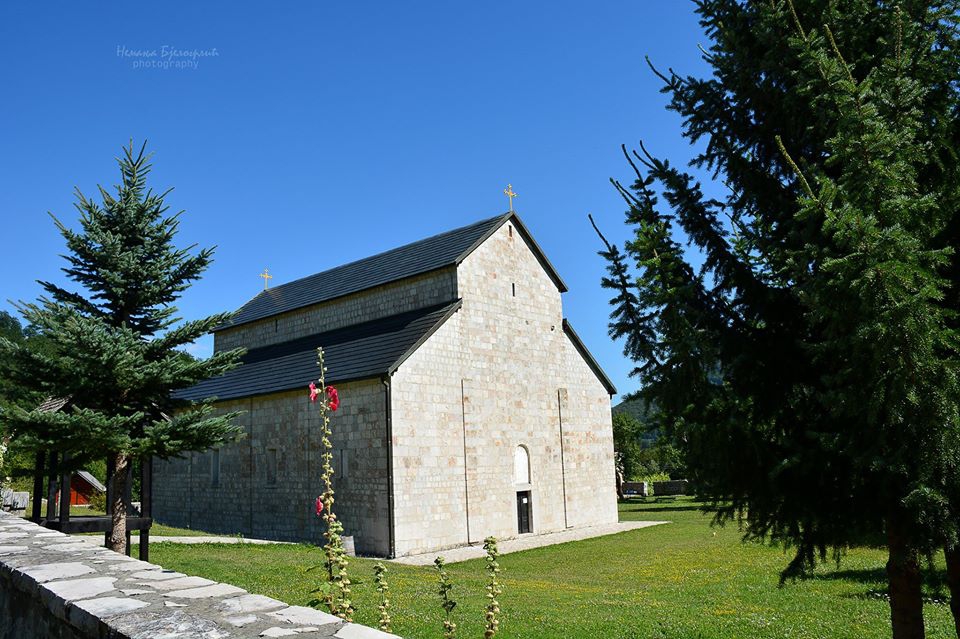 Cetinje Monastery is the most important monument of the small town under the Lovćen Mountain. It is easily accessible, being located not far away from the city centre. Since its founding to the present day, Montenegrin Metropolis has been located in Cetinje Monastery, and the Monastery itself has been the place where the fate of Montenegrin people was being decided throughout centuries. Ivan Crnojević established the Monastery in 1484, dedicating it to the Birth of the Virgin Mary. The value of this monastery is numerous. The first Montenegrin printing house was opened in the monastery, in 1493, where the first Cyrillic book “Oktoih” was printed (the book can be found in the museum of the monastery). The first secondary school in Montenegro was opened by this Monastery in 1880. Additionally, the monastery contains relics of Saint Peter of Cetinje (Peter the First Petrović Njegoš), the spiritual and civil ruler of Montenegro, as well as relics of great importance to all Christians: the part of the hand of Saint John the Baptist (who baptised Jesus) and the particles of the Holy Cross of the Lord. 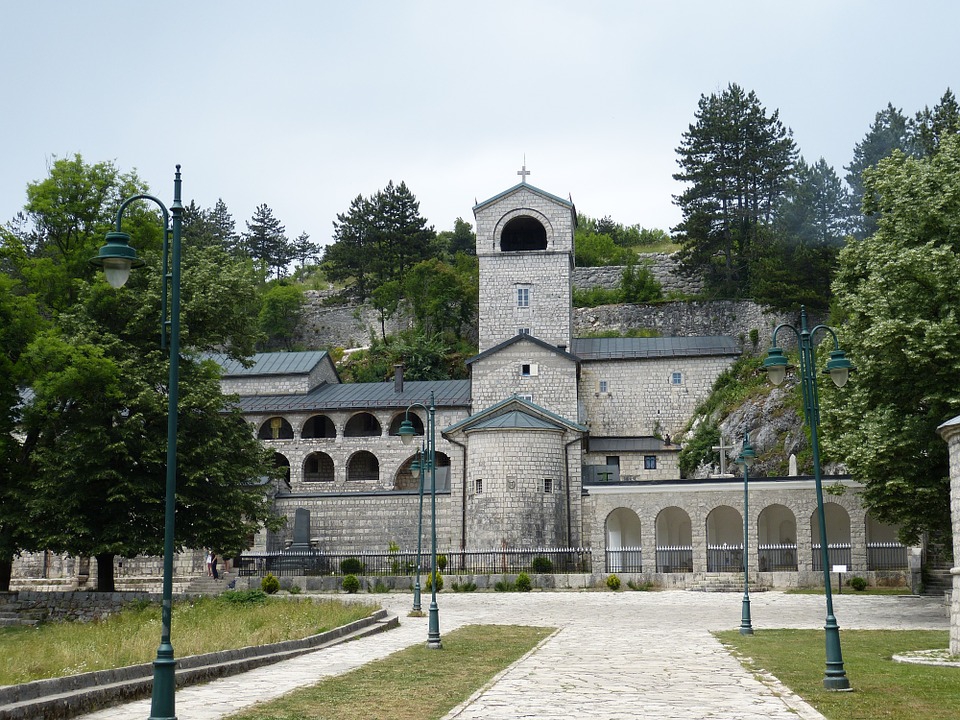 Monastery Đurđevi Stupovi is another masterpiece of the mediaeval church architecture. It was built in 1213, on the left side of the river Lim, in Berane. This endowment was built by Mayor Stefan Prvoslav, whose grave is located in the monastery. This monastery was burnt and set on fire for 5 times, then being known as the Monastery Martyr. Since 2001, Đurđevi Stupovi Monastery has been the seat of the Budimlje-Nikšić Eparchy and is dedicated to the great Martyr George. 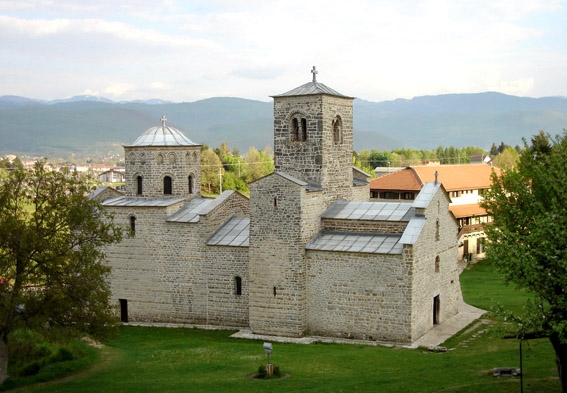 The Cathedral of Saint Tryphon in Kotor is one of the trademarks of this seaside town. It was originally built in 1166, but after being devastated due to several earthquakes, restoration was required. This is one of the two Catholic cathedrals in Montenegro, the other one is located in Bar. The most important value of the cathedral is the relics of Saint Tryphon, who is considered to be the protector of the town. There is also a large wooden cross, whose exact origin is unknown. This is one of the most visited sights in the Old Town of Kotor and this part of the Adriatic. 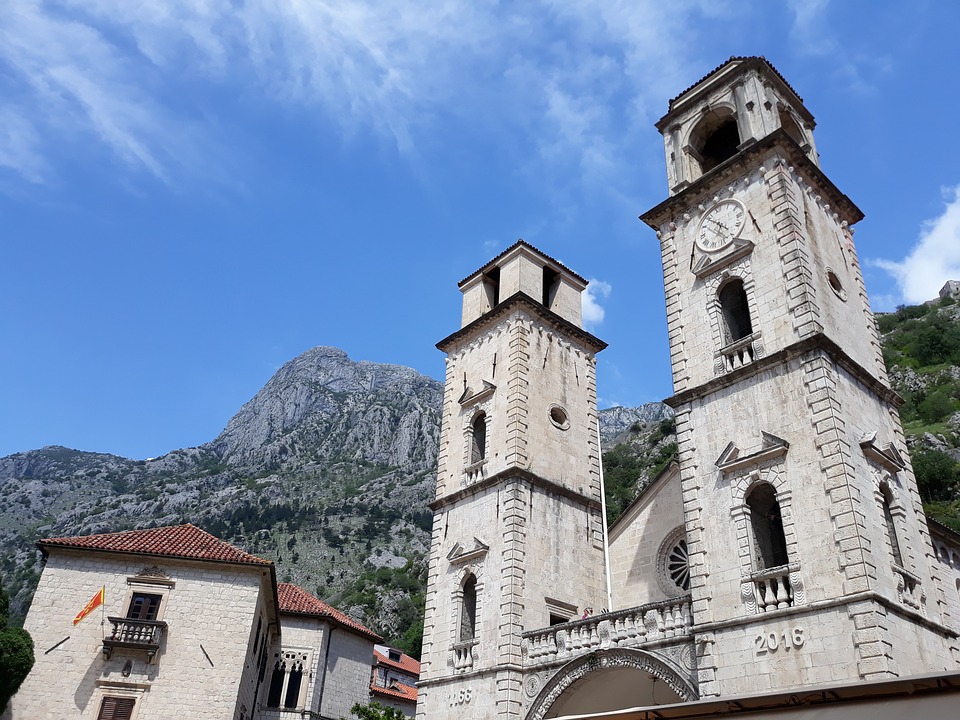 Temple of Christ’s Resurrection in Podgorica, by its beauty and monumental character, is one of the places not to be missed, when visiting Montenegro. The construction of the temple took 20 years and was formally finished in 2013, when the sanctification of the temple took place, dedicated to the 1700th anniversary of the Edict of Milan on freedom of religion. This temple is the proud owner of one of the largest bells to date in the entire Balkans. The interior of the temple is enriched with icon painting and murals. 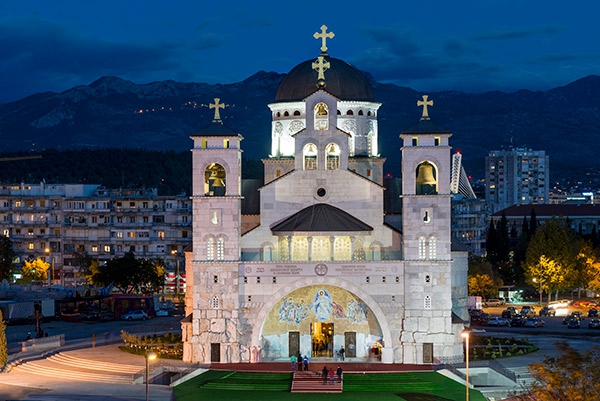 Temple of Saint Jovan Vladimir in Bar is the second biggest Orthodox Temple in Montenegro. Its construction was finished 2016, when the temple was formally opened and consecrated, in the year of jubilee - 1,000 years since the execution of the Saint to whom it is dedicated. Saint Jovan Vladimir is the protector of the town and he is also considered to be the first ruler-saint in the medieval history of this area. The temple is located in the city centre, close to the seashore. The city of Bar is one of the best examples of the union of all 3 confessions in Montenegro. Besides the temple, which brings together Orthodox believers, a Catholic Cathedral of Saint Peter and the mosque in the city of Old Bar are located. At one point, all these 3 holy buildings were being built at the same time. 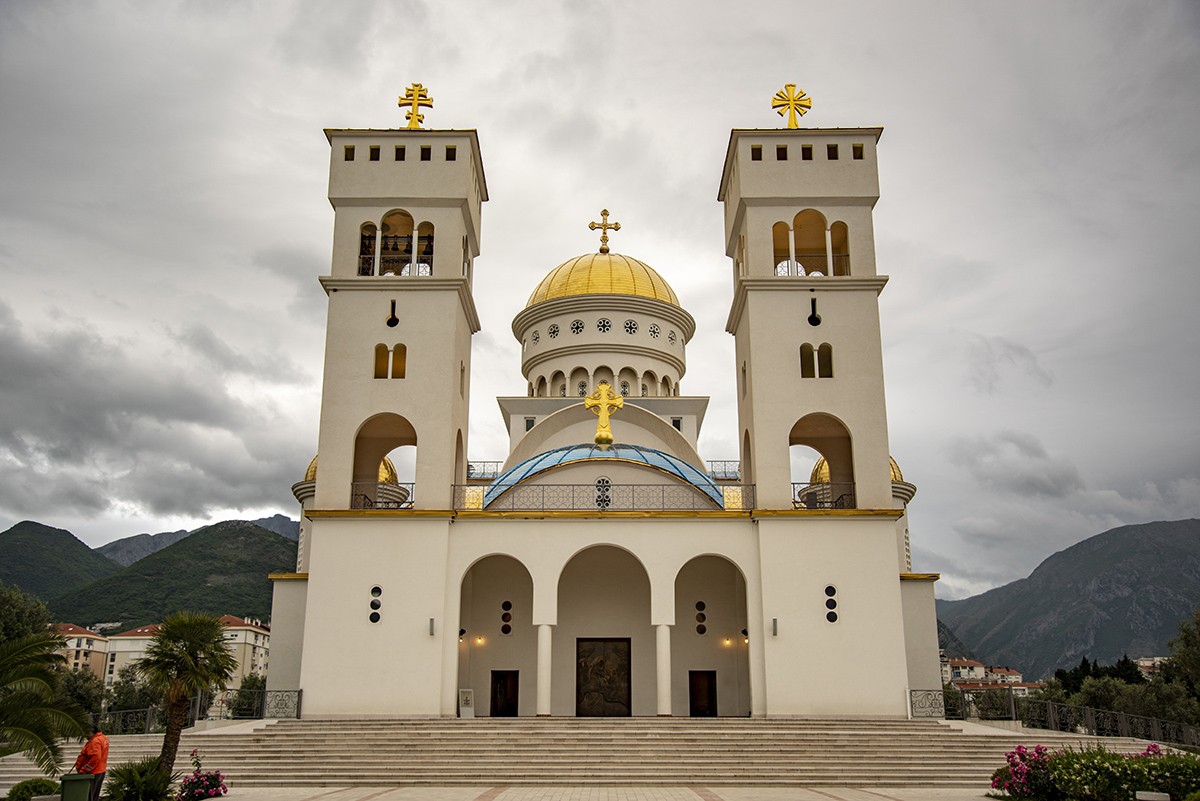 Husein Pasha’s Mosque which dates back from the 16th century is of great cultural importance not only for the city of Pljevlja, where it is located but also for the whole Balkans. This mosque is the endowment of Husein Pasha-Boljanić, who built it in 1569, making it a unique piece of architecture. The minaret of the mosque, with its height of 41 meters is one of the highest in the Balkans, and it is known that the manuscript of the Qur’an from the 16th century is being kept in the mosque. Amongst the other relicts, a particularly valuable relict which is being kept is this mosque is the hair of Prophet Mohammed’s beard. 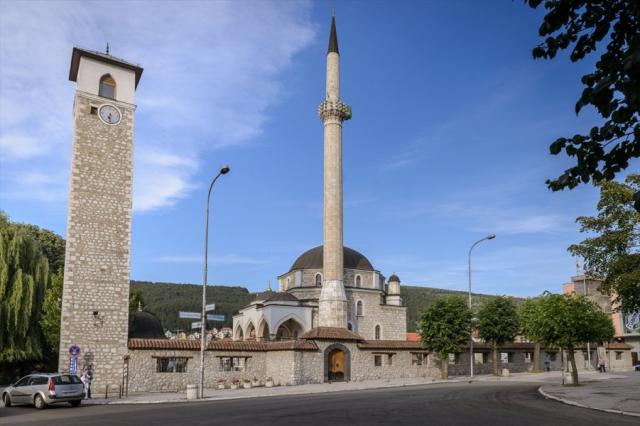 The Cathedral Church of Saint Basil of Ostrog in Nikšić represents a unique example of social, historical and cultural development of Montenegro. It was built in 1900 by Prince Nikola Petrović Njegoš and dedicated to the Montenegrins and Herzegovians who died in the 1875 – 1880 wars fought against Turks. The Cathedral Church is the owner of the pillow of Saint Basil, the cross with a particle of the Holy Cross and the relics of the martyrs of Prevlaka. An elevation originally 16 meters high, was selected as the dominant point in the surrounding area for the construction of the church. A large number of people gather each year during Saint Basil's Day, on May 12th, to pay respect to this monument and the saint protector of the city of Niksic. 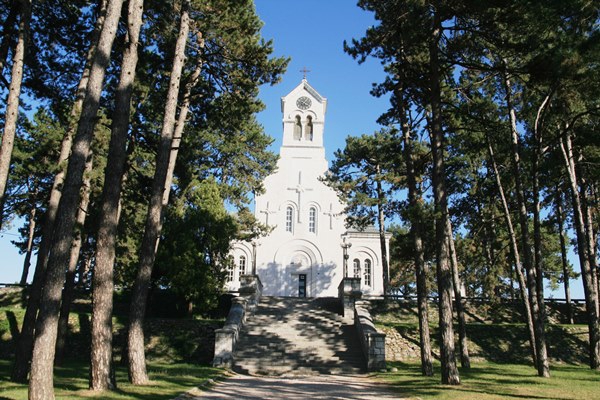 Some of the other monasteries/monuments we highly recommend you to visit in Montenegro are Gospa od Škrpjela Monastery in Perast, Podmaine Monastery in Budva, Monastery Reževići in Petrovac, Monastery Savina in Herceg Novi, etc. It's also good to know that almost every village in Montenegro has its own small, local church, where the local citizens pray and celebrate their local saints, protectors of the villages.


According to the research conducted by the Gallup Institute in 2017, 71% of Montenegrins declared themselves as religious. This indicates that religion plays an important role in life on the citizens of Montenegro. Dozens of other monasteries and churches are to be found in Montenegro, which is captivating with architecture and artistic expression, regardless if you're religious or not, or you adhere to a different faith.