Top Places to Explore in the Montenegrin North

Mountains, Lakes, Katuns and many more


Montenegro is unlike no other place you have visited before. At the 13.812 km2 of surface you will find the second deepest canyon in the world; one of the last remaining virgin forests in Europe; the biggest lake in the Balkans, mountain ranges with mountain peaks higher than 2000 metres above sea level and the southern-most fjord amongst many other natural phenomenon.

Hidden between the dense but the same time glorious mountains, this European gem has so many yet undiscovered but breath-taking places. For this reason, we have decided to take you to on a tour through the Montenegrin north, and show you why this region of our country should be on your bucket list.

Located in north-west Montenegro and belonging to the Dinarides, the mesmerising massif of Durmitor is the largest protected area in Montenegro. This attractive location is home to over 50 peaks higher than 2,000 metres, including Bobotov Kuk with 2,525 metres above sea level. In one word, it is a hiking paradise. Numerous rivers, streams, and glaciers also enrich this area which besides fascinating geological heritage has an impressive biological diversity. The exceptional beauty of this mountain is completed by the 390 km² area of the National Park, protected by UNESCO. During the winters, it becomes a major ski resort, while in the summer is popular for activities like hiking, rafting, canoeing, mountaineering etc. Some of the must-see places here are the spectacular canyons of the Draga, Sušica, Komarnica and Tara Rivers, the Black Lake and the nearby town of Žabljak. 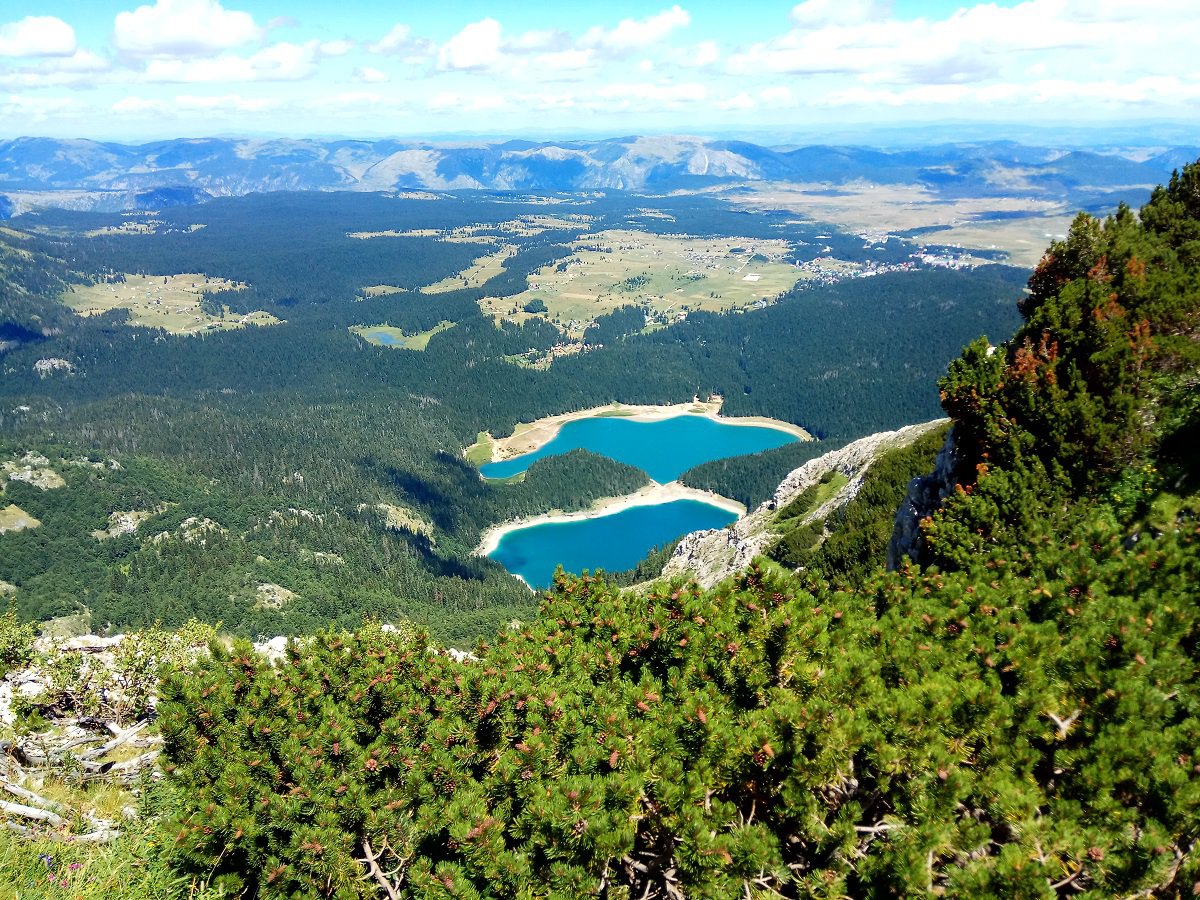 Black Lake is an experience for itself, to describe it you need to experience it by yourself. Divided into two lakes, Veliko Jezero, and Malo Jezero and surrounded by dense forest, it is one of the best examples of the unspoilt nature in Montenegro. Durmitor is also known for herb harvesting. Some of the species found here can be used for the production of tea, skin care products or even food spices such as gentian, birch, hawthorn, valerian, rose hip, juniper, Spartium, nettle, ramsons, bearberry etc.

The second deepest canyon in the world, after the Grand Canyon of Colorado, is definitely worth a visit isn’t it? This 82 kilometres long canyon, stretching to 4,250 feet at its deepest point is one of the most popular rafting routes in Europe. Also known as the “Tear of Europe” because its water is drinkable through its entire flow, the Tara River is 158 km long, has 14 different rivers flowing into it and a great number of rapids and cascades on the path. 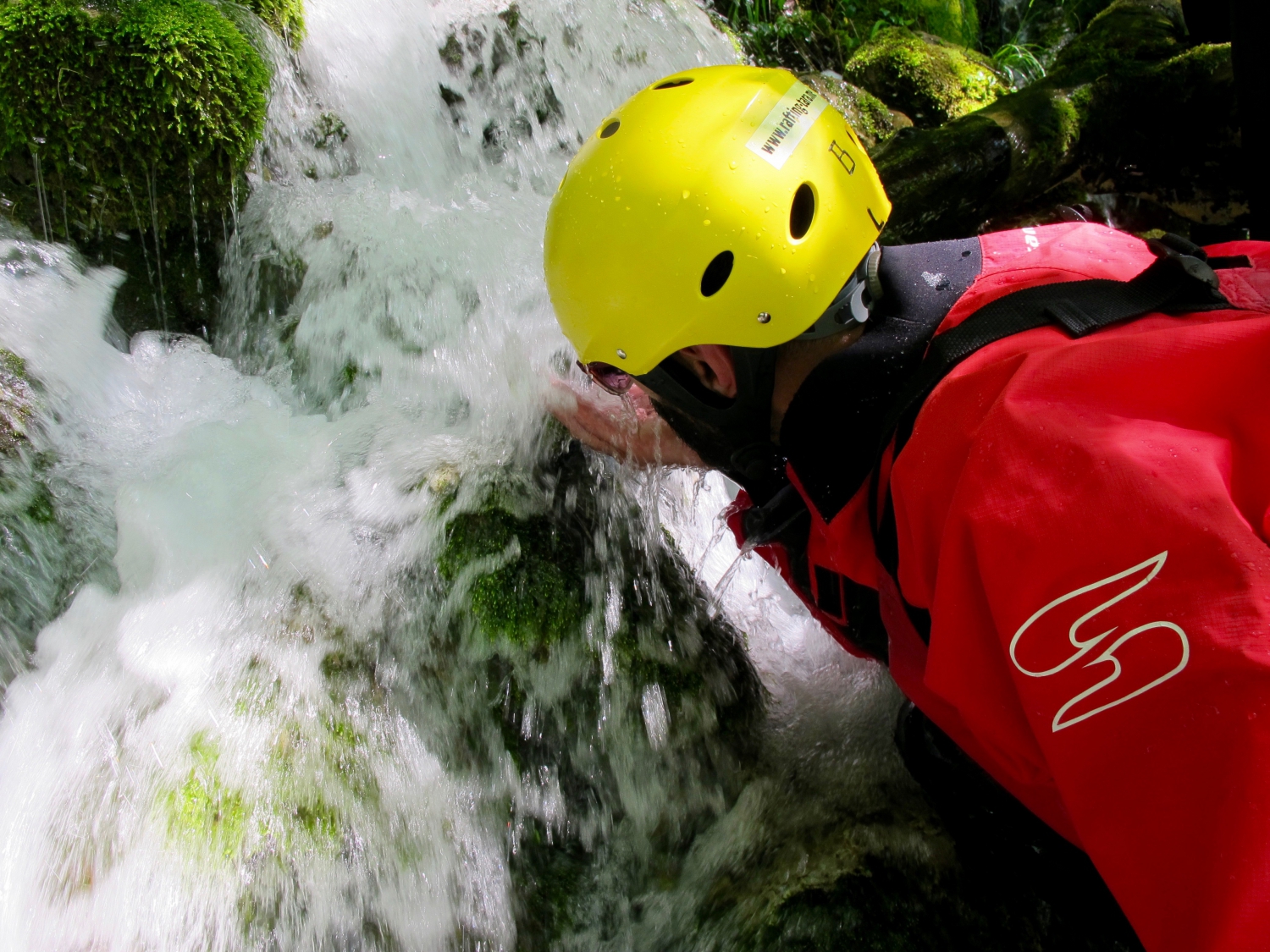 The rafting course covers around 18 km and you get about 3 hours rafting on a tour, but there are trips which take several days with a wide range of activities exploring Tara. Besides rafting, you can also opt out for activities like zip line over the Đurđevića Tara Bridge. Đurđevića Tara Bridge stands gloriously 172 meters above the river connecting its two sides, and tourists usually come to see the bridge and enjoy the view, but only the brave ones decide to go for the exciting zip line tour at the Tara Canyon Bridge. The zip line set 200 meters above the sparkling green river will for sure be one of the moments to remember on your trip to Montenegro.

Another canyon which is appealing by its extraordinary beauty is the Nevidio Canyon. Because of its unusual name Nevidio which means Unseen, it might not be your first choice when speaking about the must-see or must-visit list, but the magical beauty of this canyon will enchant you. This is the last discovered canyon in Europe, and what makes it different from all the other places in Montenegro is that is has been out of the human reach for a long period of time. So, all the intact beauty is still preserved in its natural form but adapted for all the nature lovers. The canyon is about 4 kilometres long and it takes several hours to pass it. Generally, it is passed in organised guided groups with all the modern equipment and necessary communication and navigation tools. Check how it was for our team, on this link. 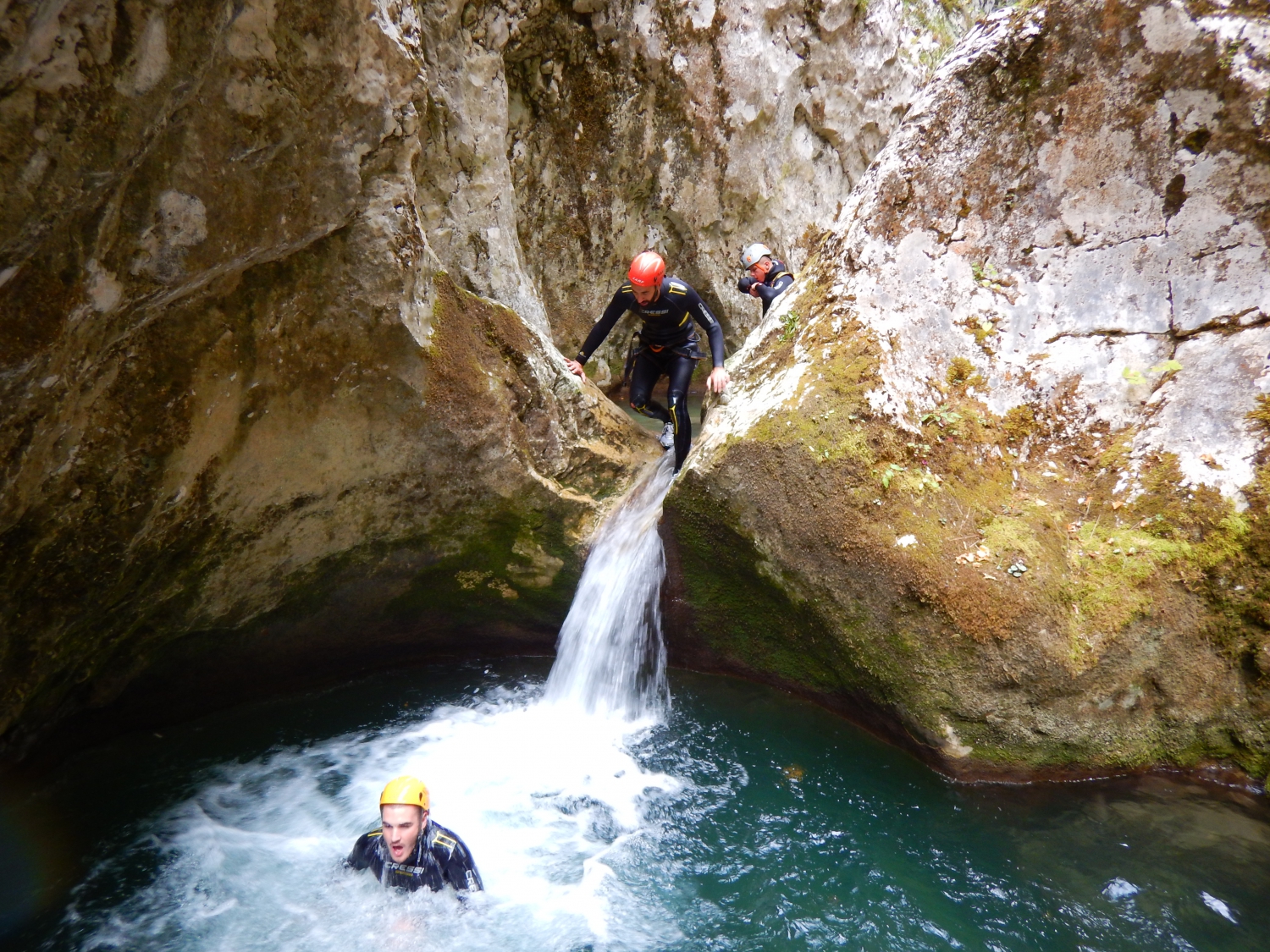 Prokletije or translated in English “accursed mountains” belong to one of the most grandiose mountain ranges - the Dinaric Alps, and at the same time, it is the mountain range with the highest peak in Montenegro. When visiting this place, you will learn a lot of interesting stories about this uniquely named mountain. At the area of 16.630 ha, there is also the same named National Park. 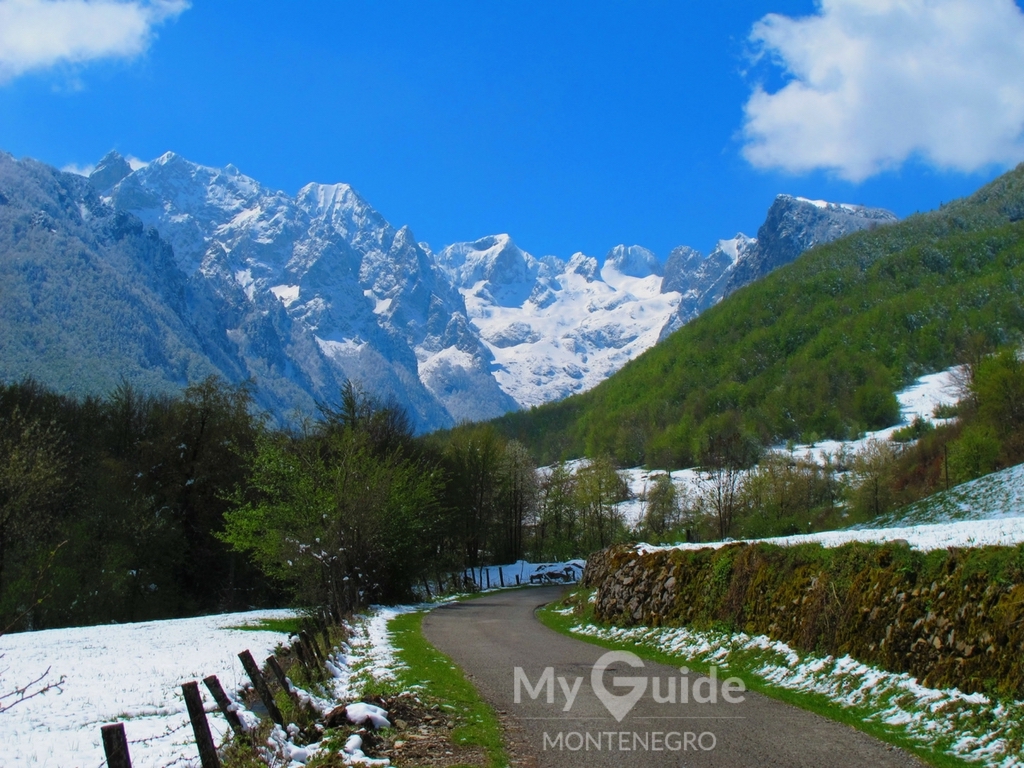 Although it is thought that Bobotov Kuk is the highest mountain peak in Montenegro, it is actually Zla Kolata of Prokletije which takes the title with 2.534 metres above sea level. Due to its geographic location and inaccessible terrain, most of this area is yet unknown and undiscovered so it is not recommended to walk around unequipped and inexperienced or without a guide. But still, Prokletije has one of the most impressive hikes in the whole country. Glacial lakes, rivers, valleys, steep slopes, green fields, meadows and the cultural monuments in the nearby cities are the reasons why this northern gem should be on your must-visit list. A 20-minutes-drive from the town of Gusinje will lead you to the Grebaje Valley from where you will have access to the most impressive hikes in this mountain. Don’t forget to bring your camping equipment because you can also spend the night in this incredible scenery.

Situated in the small town of Plužine, like one of the youngest towns in the northern region, Piva Lake is also one of the main tourist attractions. The lake is around 45 km large, and in some spots deeper than 200 metres. It is an artificial lake formed by the construction of the Piva hydro-electric plant in 1975.

This lake is considered to be one of the largest drinking water reservoirs thanks to its crystal clear waters. It is also very suitable for fishing, fly fishing, and kayaking. It is part of the Nature Park Piva. Here you can taste a traditional Montenegrin breakfast: priganice with honey or homemade cheese and kačamak for lunch, all that in a picturesque landscape. 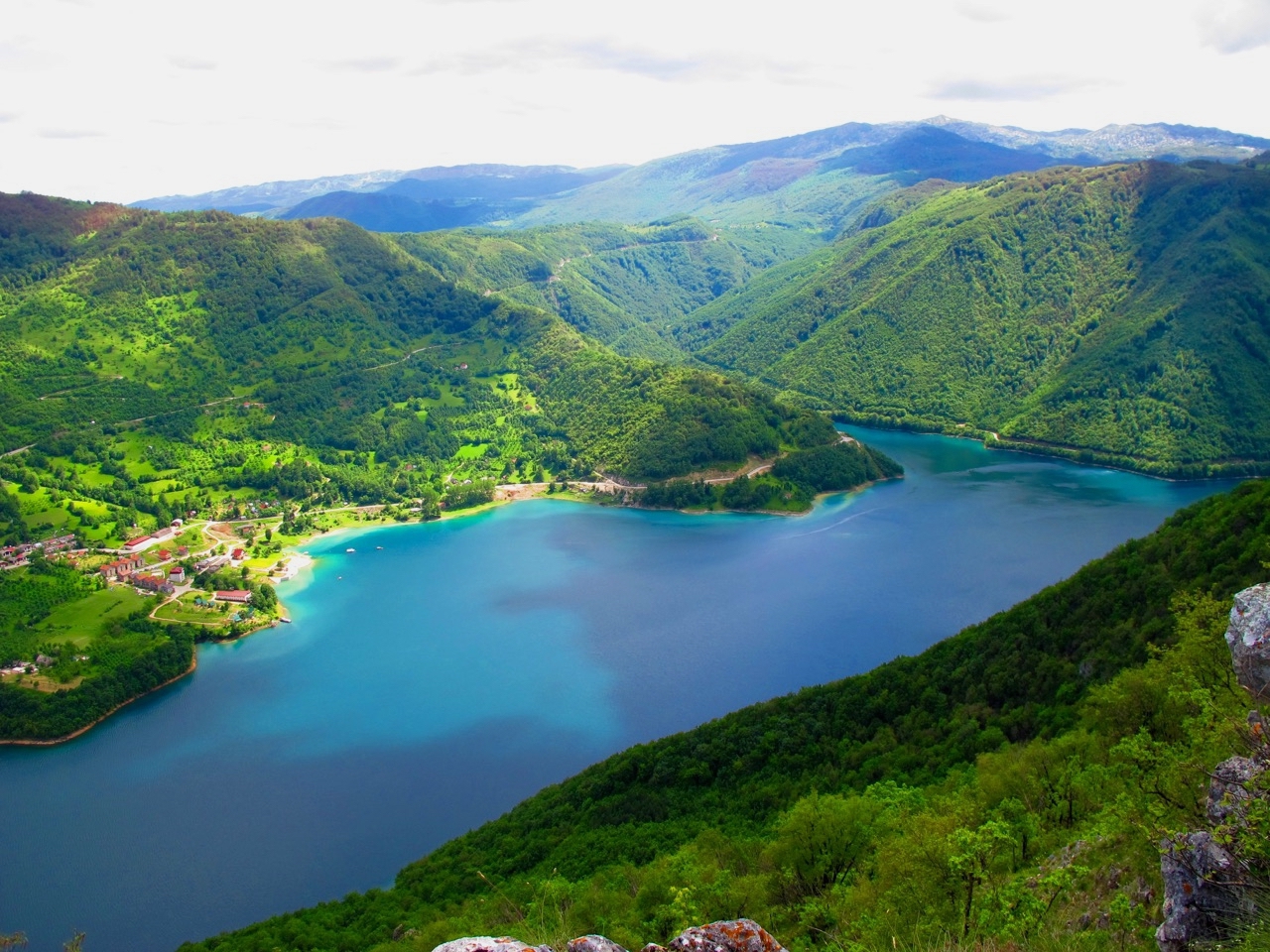 Unlike other similar dams around the world that were built to produce more electric power, this area kept its natural values and it is still one of the most attractive places for tourists who like to explore nature. The lake is surrounded by high mountains (as usual in Montenegro) and there are many hiking tours that you can take. We had time to remember when we were hiking to the Veliki Vitao peak in the Piva mountain range! Take a look here.

Encircled by Prokletije from the south and Bjelasica from the north, another impressive mountain range Komovi is located in north-east Montenegro. This 40km long and 30km wide massif is covered by the vast platforms with an average altitude of 2000 metres (Kom Kučki  - 2487 metres; Kom Vasojevićki - 2461 metres; Kom Lijevoriječki - 2483 metres etc.). 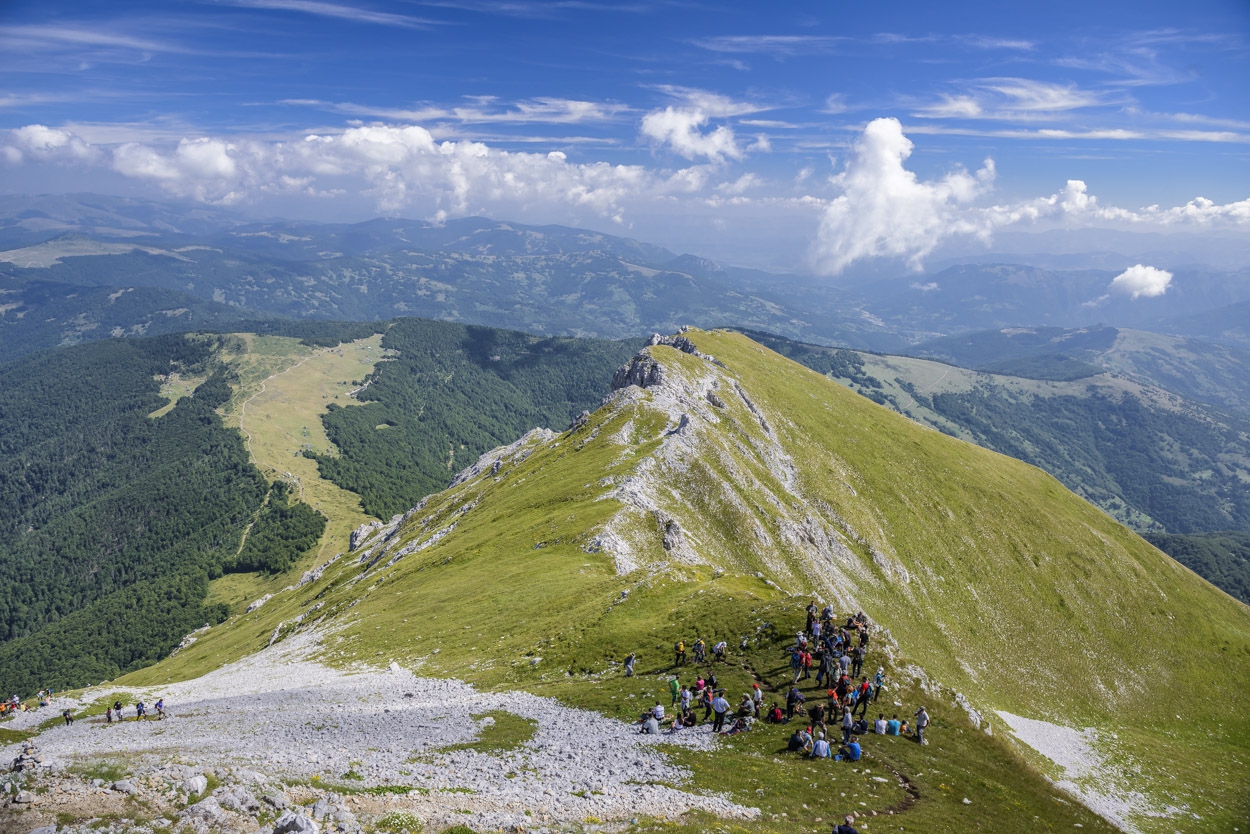 What catches the eye of the most visitors of this mountain is the Eco Katun Štavna located here. This eco katun is the first project in the field of sustainable tourism and ecology in order to valorise tourist potential and initiate the homemade production. Komovi Mountain fascinates not only with its diversity of natural attractions and rich flora and fauna but also with numerous cultural monuments, churches, and monasteries which can be found in the municipalities of Berane and Andrijevica, located in the foothill of Komovi.

In the central continental region of Montenegro, leaning east, surrounded by 5 towns, the captivating range of Bjelasica Mountain takes place. The interesting fact is that the mountain is made of volcanic composition and is abundant in lakes and rivers. The most beautiful of them is the Biograd River which enters Biograd Lake, the jewel of this mountain. The lake is located within the NP Biogradska Gora and it is its biggest and the most attractive glacial lake. There are also Pešića Lake, Veliko Šiško Lake, Malo Šiško Lake, Ursulovačko Lake, etc.

As one of the last remaining virgin forests in Europe, NP Biogradska Gora has 80% of the wood-covered area, with some of them being more than 500 years old. This park represents a natural reserve with a unique geographical and biological structure, being an open lab for biologists and all nature lovers. In the springs and summers especially, Bjelasica becomes filled with people harvesting mushrooms and berries, which are later used for sale. 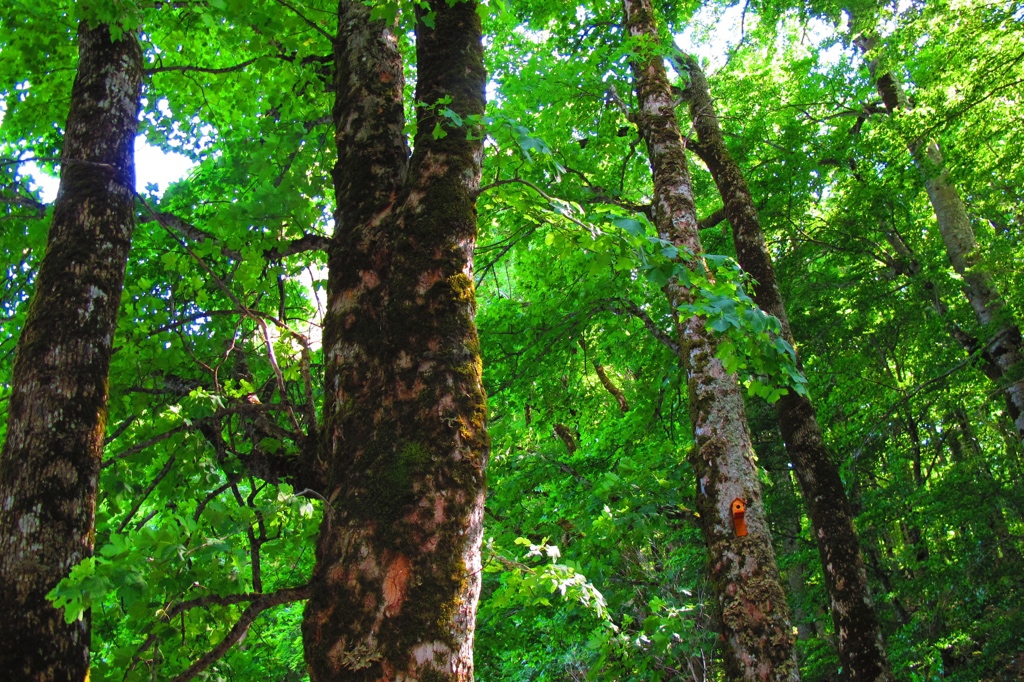 From Biograd Lake, you can do a hiking or even cycling tour to the katuns located in one of the Bjelasica peaks. Katun is a part-year settlement that is built by peasants who keep cattle. Katun is actually their summer home, once it gets too hot in the villages for livestock to bear. In recent years, katuns also include some accommodation units for travellers, so to make your Montenegro adventure even more interesting, you can come and decide to spend the night at the small wooden cottages located 2000 m above the sea level.

Sinjajevina is another in a series of Montenegrin mountains. According to its surface, this is the largest and widest mountain in Montenegro. But bypassing the Durmitor highlands and stretching from Zabljak to the southeast and bordered by the rivers of Tara and Morača, it isn’t that much popular amongst tourists. What is interesting is that Sinjajevina is one of the first pasture-pastoral mountains, with a land area of 120.000 ha. Here you will have the opportunity to see the Montenegrin tradition of cattle grazing and the way of life that individual and traditional Montenegrin households continue to practice. You can also see the way homemade cheese is produced, and this whole process takes place in the hosts' houses. In this way, you meet the real Montenegro and its traditions in the north.

Sinjajevina is one of the last kept secrets and some inhabitants recently started a petition to make it a protected area. In case you are willing to sign, you can find the petition here. Sinjajevina is the most popular amongst cycling tourists as some of the Top Cycling Trails are marked across the slopes of Sinjajevina.

We hope that these reasons were enough for you to already start planning your next trip to the Montenegrin north. If you have visited some other exciting places in the northern parts, we would be more than happy to hear your experience!
Written by: Irena
PUBLISHED: Apr 21st 2022