The Gastro Guide of the Bay of Kotor

The gastro identity of the Boka Kotorska Bay was created by recipes from the most diverse origins, through contact with many different cultures that were coming and going or staying and merging with the locals. Gastronomy, as a significant aspect of the art of living, is an important urbanity factor of towns in the Boka Bay, and one that is greatly influenced by social, economic and historical circumstances. Since the times of the ancient Greek, Illyrian, Byzantine, Ottoman, Venetian, French, Russian and Austro-Hungarian rule until the present day, the Boka Bay cuisine has accepted various gastro inputs and penetrated them with the local expertise. There is a many-centuries-long tradition of creatively adjusting the original recipe according to local taste, thus giving this cuisine its own uniqueness while keeping the basic characteristics of the dish. Because of it, we can classify the Adriatic— Boka Cuisine as a part of the Mediterranean gastronomy. 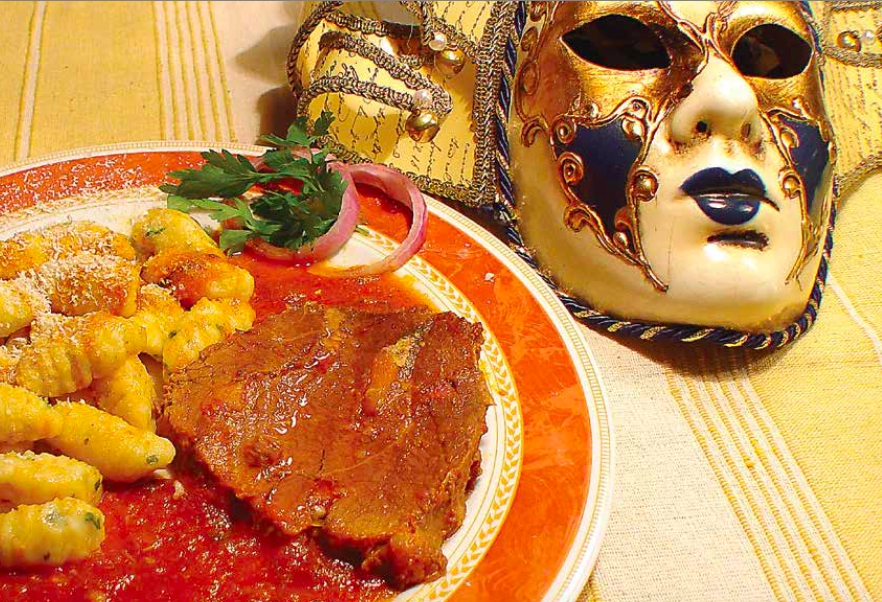 All of the towns in Boka Bay, stringed together as a pearl necklace on its coast, from Herceg Novi, Bijela, Kostanjica, Morinj, Risan, through Perast, Dobrota and Kotor, all the way to Prcanj, Tivat and Grbalj, have kept their specific dialect, accent, culture and even different aromas and tastes of the same dishes. Almost every cove has its own culinary story.

The Venetian Republic ruled Boka Bay region for almost 400 years. During that time, it significantly influenced and contributed to the cultural and gastro development of Boka Bay. The 12th and 18th centuries were the time of its economic boom when seafaring was the main source of development and progress. During that period, thanks to seafaring, Boka Bay was communicating with all Mediterranean countries, especially Venice. Venice was a haven for all Mediterranean traditions and it influenced on Boka Bay's culture, tradition as well as gastronomy. Ships were leaving Boka with local products: various types of dried meat, smoked ham, bacon, kastradina (dried lamb), dried and salted fish, honey tallow, beeswax, salt, wine, olives and olive oil. 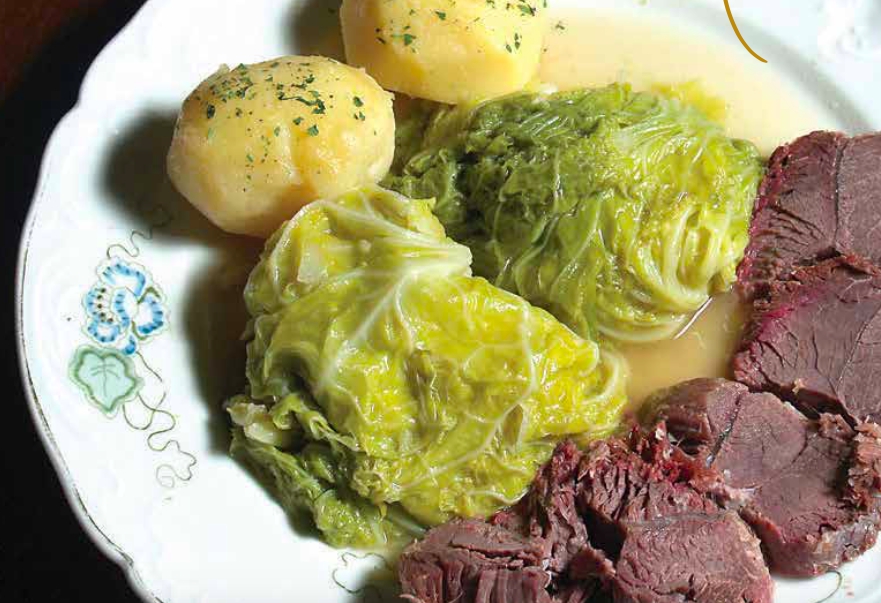 As two cultures and cuisines met during the pre-telephone era, the gastro information was the fastest way to conquer places and nations of the Mediterranean and beyond. It can be said that gastronomy was the initial process of globalisation that became the present way of life. In the past, the most direct contact between the two cultures was made through dining, with good food that was memorised and passed on. Not even Venetians who lived in the 16th and 17th century were indifferent to autochthonous local dishes: the kastradina with collard greens, kale or cabbage that was cooked throughout the eastern Adriatic coast, from Istria to Boka Bay. Even today, in the Veneto region in Italy, kastradina is a gastronomic delicacy. Smoked ham from the Njegusi village and the Lustica area, cheese dried in wheat or conserved in olive oil, olives in salted water or cracked green olives all used to find their way to the dining tables of the Venetian nobility, even of the Venetian Doge. 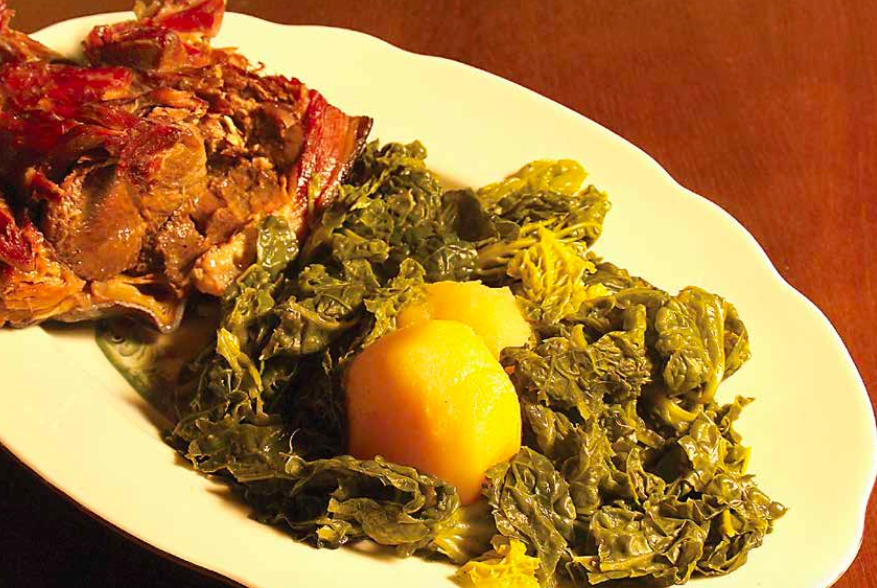 As a natural phenomenon, the Boka Bay was formed as a fjord of exceptional beauty and it was included in the club of the Most Beautiful Bays in the World. High mountains that rise up from the sea make a natural barrier between two climates. The climate by the sea is mild, while behind the hills it is much harsher with cold and snowy winters. Because of these conditions, in the coastal area the locals can catch fish and cultivate grapes, olives and citrus fruits, and at higher altitudes, in pristine nature, they can herd animals and cultivate vegetables specific for this type of climate. This diversity of food in a relatively small area created two cuisines - the coastal and the montane that complement each other in the best way, depending on the season and the holiday. This gastro combination created dishes such as: boiled beef with tomato salsa, flour macaroni (made by hand over a needle) with salty cheese, roast beef, lamb roasted in ember with potatoes and roasted vegetables, kastradina with leafy greens or cabbage, pork sausages with cabbage and potatoes, lamb with peas, tripe, stews, gnocchi etc. There are also seafood specialities: sardines, smelts, pandoras, etc. 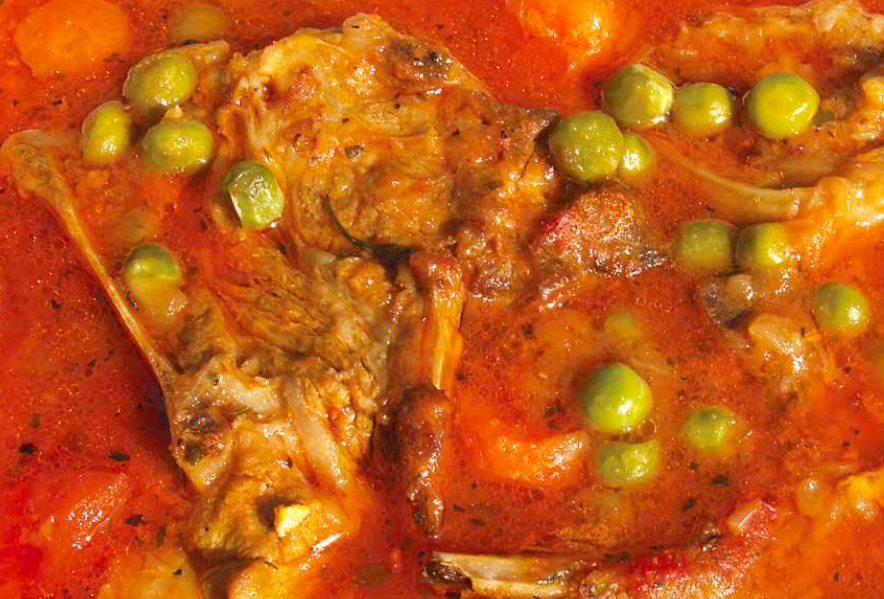 The Lamb with Peas

Boka Bay is also known for its high-quality mussels, wild or cultivated. The sea in the bay is very clean due to the many mountain springs along the coast and has a ratio of fresh and salty water that is excellent for delicious mussels. Also, delicious oysters are on the menu. It is hard to resist dishes such as Gurdic mussels, Filomena sauce, Mussels “od mota”, Risotto “a-la-maka”, Boka Bay fish stew, Barbina minestrone, Bakalar Zgavcet (cod), Black risotto, Providur Palamida (mackerel), Carnival gnocchi, and many others. 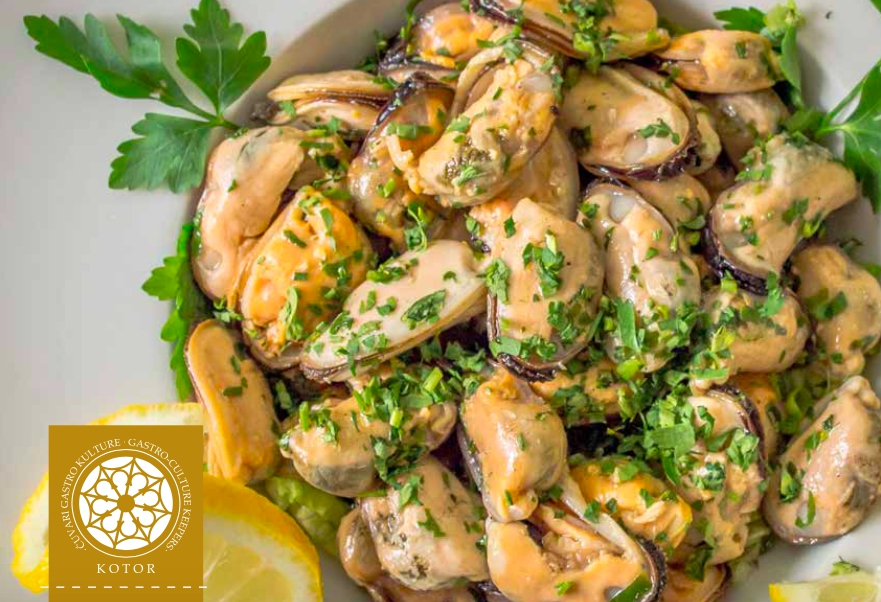 Thanks to the farmers from the surrounding areas, all kinds of vegetables are produced organically and sold at the open market, located next to the Kotor city walls. The most popular vegetables in Boka Bay are eggplant, zucchini, lettuce, tomatoes, peppers, potatoes, chard, spinach, onion, garlic, etc. In the springtime, you can enjoy salads made with wild asparagus, black bindweed, rucola and poison ivy, with the addition of various local spices such as thyme, bay leaf, marjoram, fennel, parsley, oregano, etc. 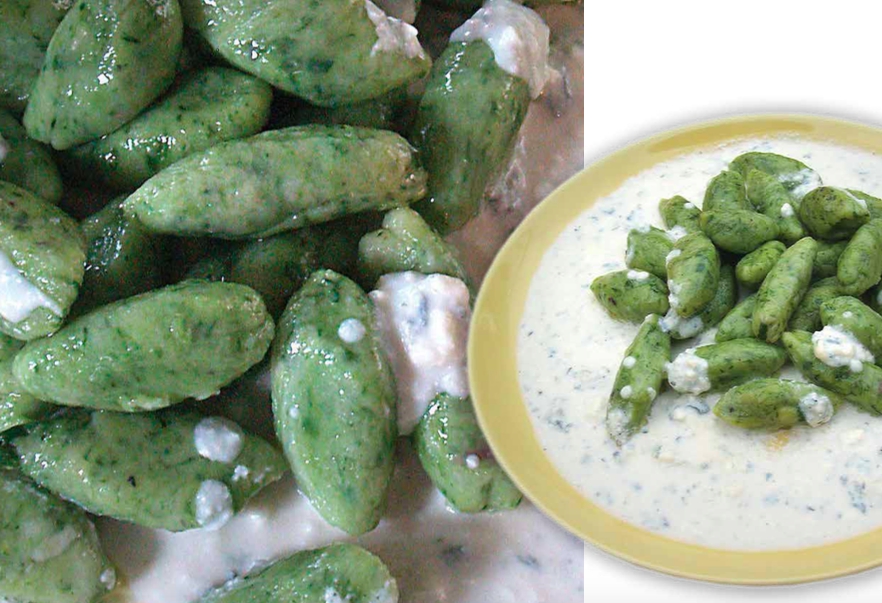 The famous desserts are Dobrota Cake and Kotor Pasta, which date back to the 18th and 19th century. There are other sweets typical for this area: krostule, paradizet, strudel, priganice, Perast Bobi, mandola, arancini, homemade pies, etc. 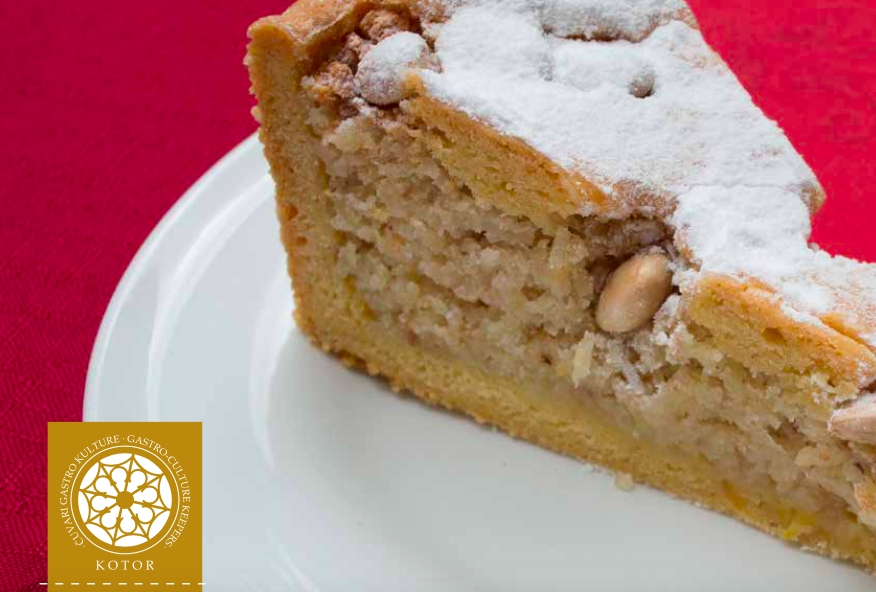 After a long restoration of the Kotor Old Town and the other coastal towns in the Kotor Municipality, after the 1979 earthquake, the eternal beauty of the stone was restored and given a new sparkle. Kotor became a tourist destination visited by cruise ships and all other means of travel. 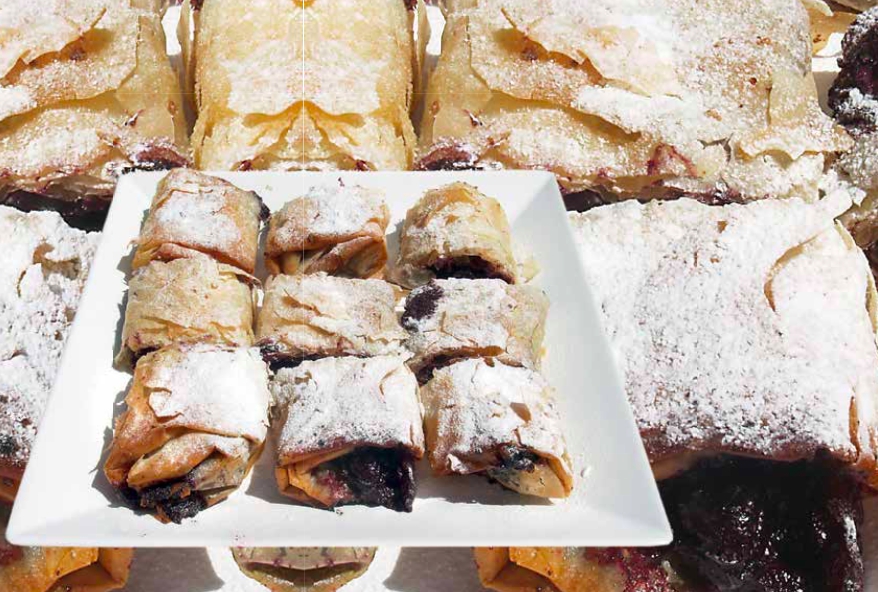 During the tourist summer season, which is longer and richer every year, the town gets up to 3000 visitors per day. On the eight Kotor squares, there is a choice between 70 cafes and restaurant, where you can taste a bit of the autochthonous Boka Bay dishes. You can enjoy them inside the restaurants or outside, on terraces overlooking the squares, stone palaces, churches, museums, etc. 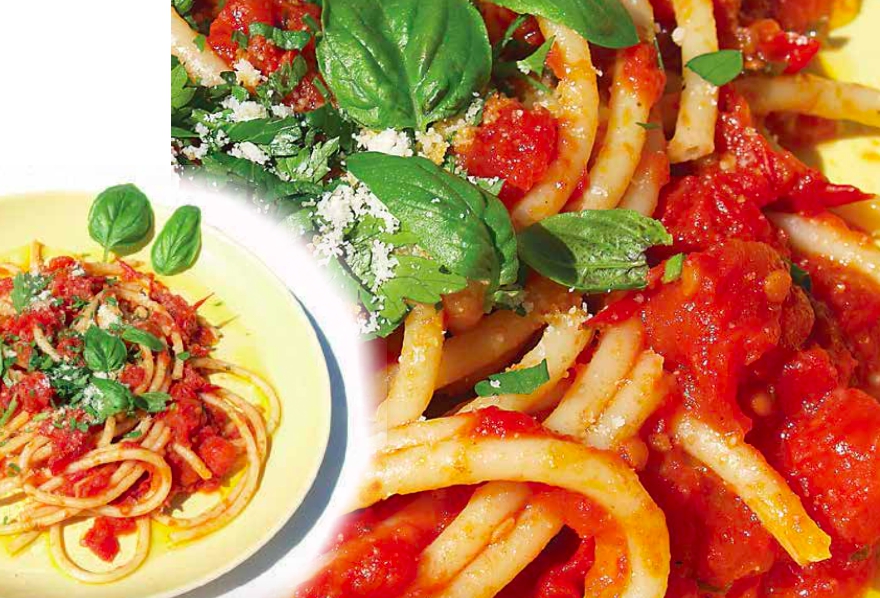 The restaurants with a beautiful interior ambience that serve traditional dishes are marked with a special label because they are the keepers of the gastro-culture of the town of Kotor, and of the Boka Bay as a whole.

If you wish to take a gastro souvenir with you, there is a book Boka Bay Cuisine by Vlasta Mandic. The book contains 101 recipes and is spiced with natural and cultural values of Kotor and Boka Bay. 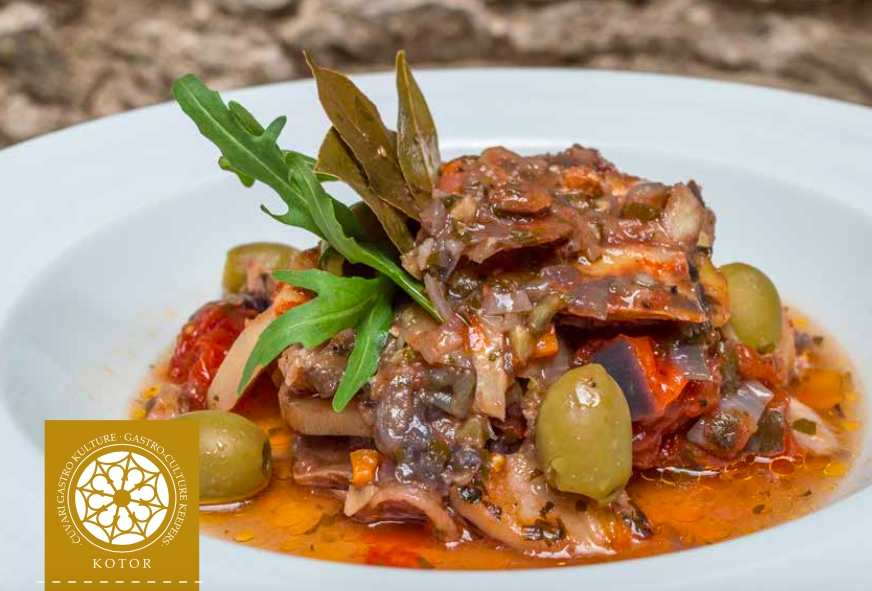 We would like to welcome you to the town of Kotor and Boka Bay, hoping that you will enjoy your stay and come back again.