On a last evening of January, I had that pleasure to participate to the probation dinner in the newest add-on inside the Regent hotel ÃÂ¢ÃÂÃÂ Pop Up Restaurant. You are thinking now what was the probation for? Well, as in the case of Murano Restaurant, we again had that pleasure to be amongst the first guests of this newest addition to test the ambience and the food and share the news with the world!ÃÂ

The most important thing to know about this place, and that should be said in the beginning, is that unlike other RegentÃÂ¢ÃÂÃÂs in-house restaurants that are mostly serving international cuisine, this place is all about Montenegro. The biggest accent in the menu is given to the home location of the hotel - Boka Bay. This Bay has a rich tradition of preparing Mediterranean cuisine with its own twist and accent and in the past times, the recipes from the Bay of Kotor were known along the Adriatic coast and were combined with Dalmatian, Italian and other similar ones. But, modern times are bringing new generations that easily forget the tradition if itÃÂ¢ÃÂÃÂs not constantly served in front of them, so some of the recipes were lost or forgotten.ÃÂ

In order to do something to keep the tradition and culture of the Bay, the creative duo of the Regent Hotel, Elena and Dragana, came up with the idea to keep these recipes from the oblivion and give them a new life inside their luxury 5-star venue. Thus, as we already published, the contest was organised where the team of Regent invited everyone from the area of Boka Bay to send their authentic recipes and participate to the competition where the 3 best ones will be selected and featured in the official menu of the new Regent Pop Up.ÃÂ

The probation dinner gathered people from the culinary field, as well as us from the marketing field, to taste the menu that Chef and his team prepared and to give our comments and evaluate the new place. The evening was a blast, as we had a chance to share the table with one of the authentic publicists and Boka Bay journalist and writer, Mr Maso Cekic. He gave a lot of value to the evening, as he knows all about Boka Bay in general, but also details about the cuisine and ways of preparing the dishes traditionally, because he is preparing a lot of these himself, too. Thus, he was the first one to comment, each time when the Chef Srdjan Begovic introduced us with a new course of the dinner. ÃÂ 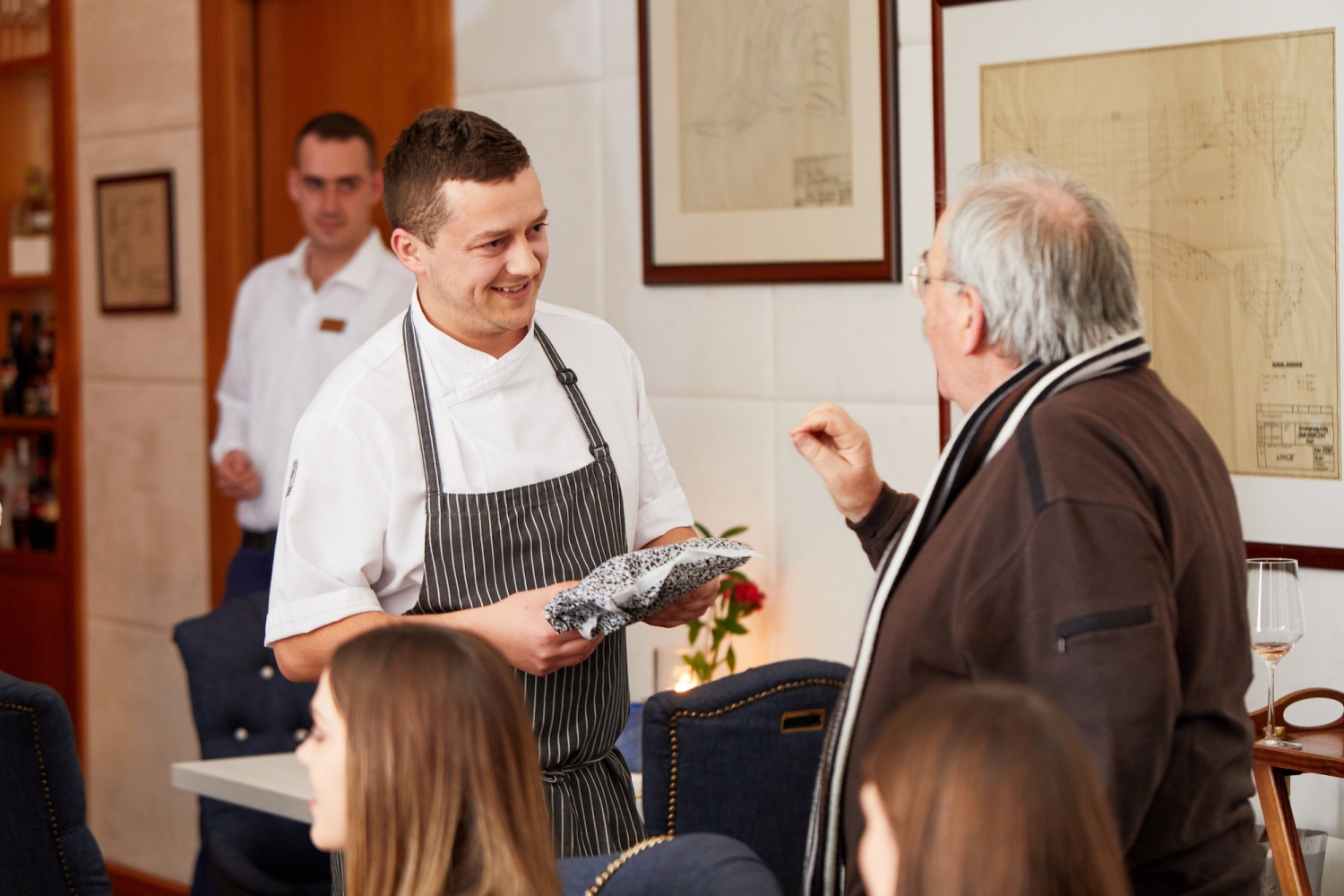 The evening started with the Montenegrin plate, as traditional around all of the country. Unlike the Montenegrin plate in the north, this one was inspired by the Boka Bay fruits, so we enjoyed homemade marinated olives, selection of the farm cheese and as usual Lovcen prosciutto, beef prosciutto and sourced sausages. Honey was arranged and served together with honeycomb and combined with the cheese of your choice, marking the real opening of the Boka Bay meal. Our ancestors left us with this tradition, to keep it and treasure it! 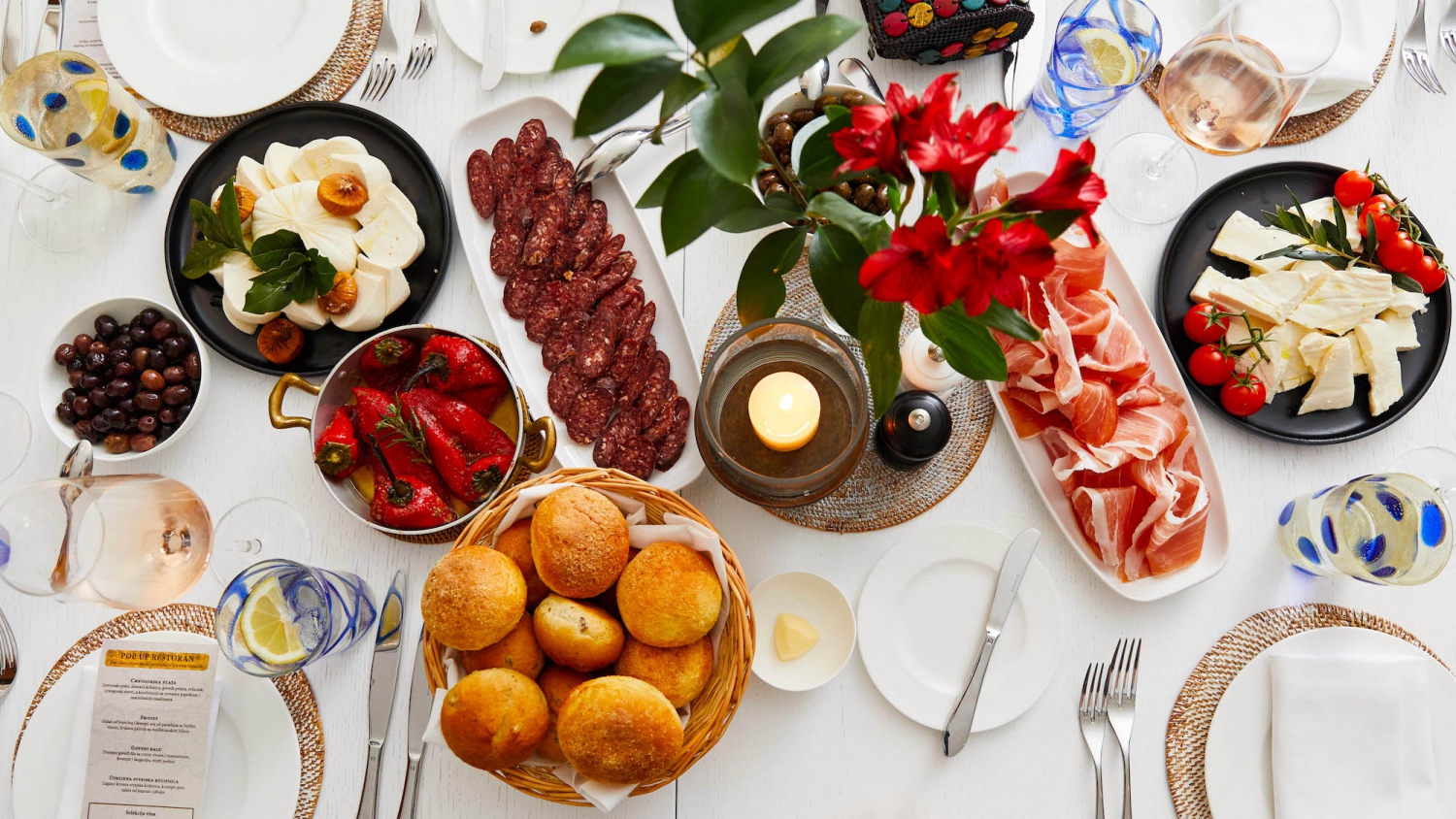 After taking a lot of photos of the beautifully arranged table and enjoying the first bites of the evening, we skipped to the second course, which was typical Boka Bay ÃÂ¢ÃÂÃÂ The Brodet! This is one of the most popular meals in the Bay of Kotor, usually prepared during every festivity and inside every household. The dish was made of sea bass and prawn stew followed with white wine infused tomato sauce and crispy polenta with Mediterranean herbs. This dish was my absolute favourite of the evening, as I am a big seafood fan and a person strongly connected to Kotor and its heritage. Assuming that I am not living in Kotor for years now already, this is what I miss the most when we talk about the food! So, Regent gave me a perfect treat without even asking. ÃÂ¢ÃÂÃÂº The brodet was delicious and every ingredient was on its spot, by my taste! My warm recommendation to taste it as soon as possible! 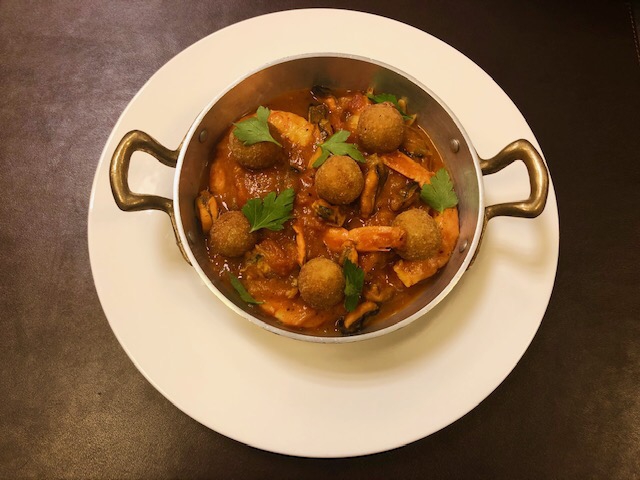 During this course, Mr Maso briefed us with some additional information about the Boka Bay brodet and various types of it that can be found along the coast, as every village has its own accent and way of preparing it. So, some villages only include so-called white fish in the brodet, but others also include so-called small fish ÃÂ¢ÃÂÃÂ such as mussels, prawns and other.ÃÂ

We were also enjoying a parallel in between tradition that Mr Maso was trying to convey to us and the modern approach of 2 young food bloggers from Montenegro that seemed amazing in what they do ÃÂ¢ÃÂÃÂ hedonista.me and Damirove Gastrolomije. Check out their feed on social media and enjoy delicious recipes on their blogs! I am sure you will love it!

While we were chatting and discussing the flavours, the Chef and his team brought the 3rd course. It was the Beef Stew ÃÂ¢ÃÂÃÂ slowly braised beef fillet with red wine and rosemary, baby potatoes and carrots and fresh parsley. As I am not a meat-eater (except the fish of course, which is the base of my nutrition), I canÃÂ¢ÃÂÃÂt give you my personal opinion about the meat itself, but I can tell you that everyone at the table finished this course quickly and were very happy with it! I can tell you that it smelled amazing and that the side dish combining the same stew and baby potatoes and carrots was absolutely delicious! Everyone who is into meat ÃÂ¢ÃÂÃÂ this is a dish you should definitely taste! 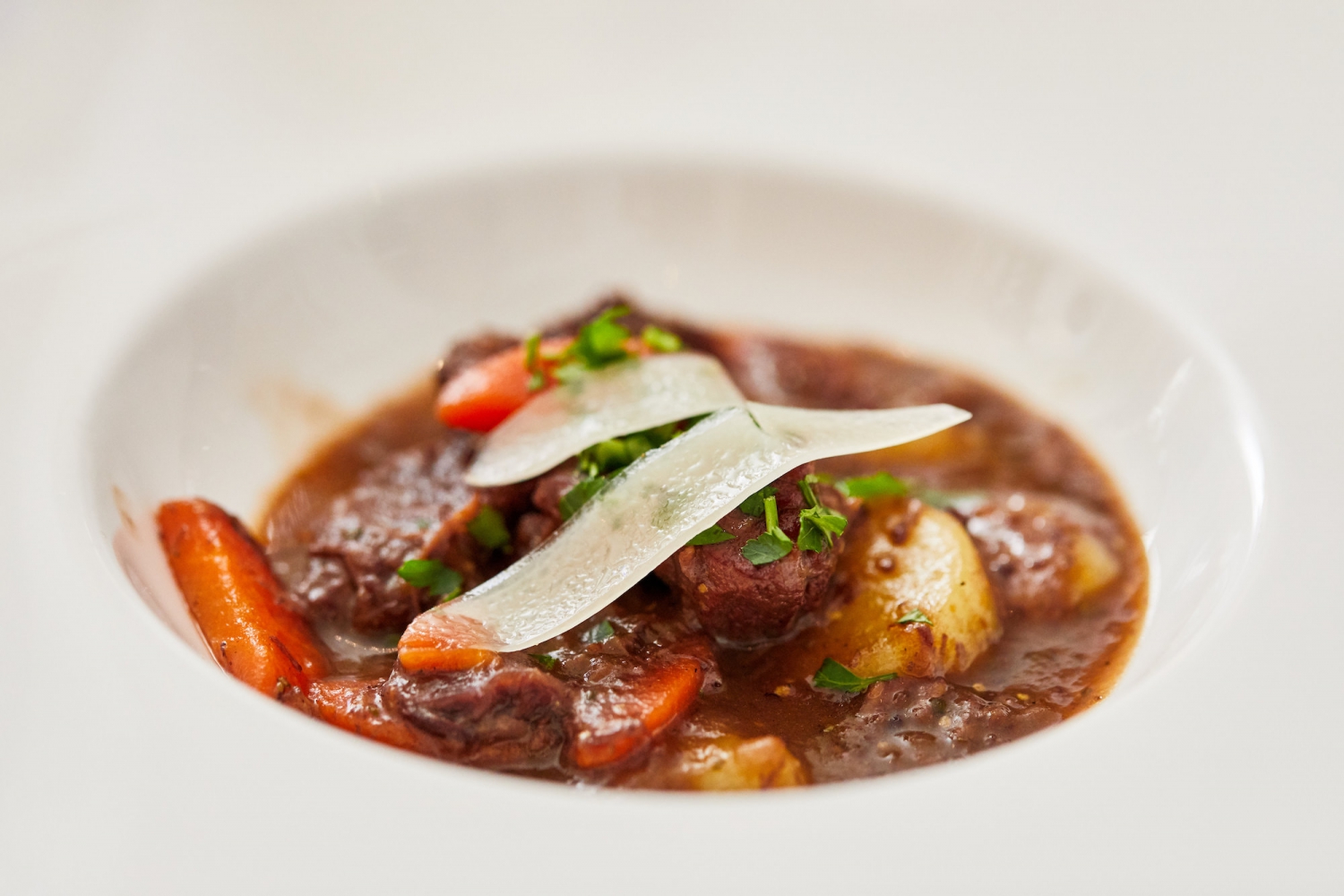 The 4th course was Montenegrin traditional ÃÂ¢ÃÂÃÂ slow-cooked pork shank, potato puree with cabbage and apple salad. Smells and flavours all around! According to my colleagues at the table, the meat was delicious and so soft that even I tasted a bit of it, just to try. ÃÂ¢ÃÂÃÂº The side dish was extremely well prepared and even if it was just a potato puree, the taste was full and rich, so I enjoyed! 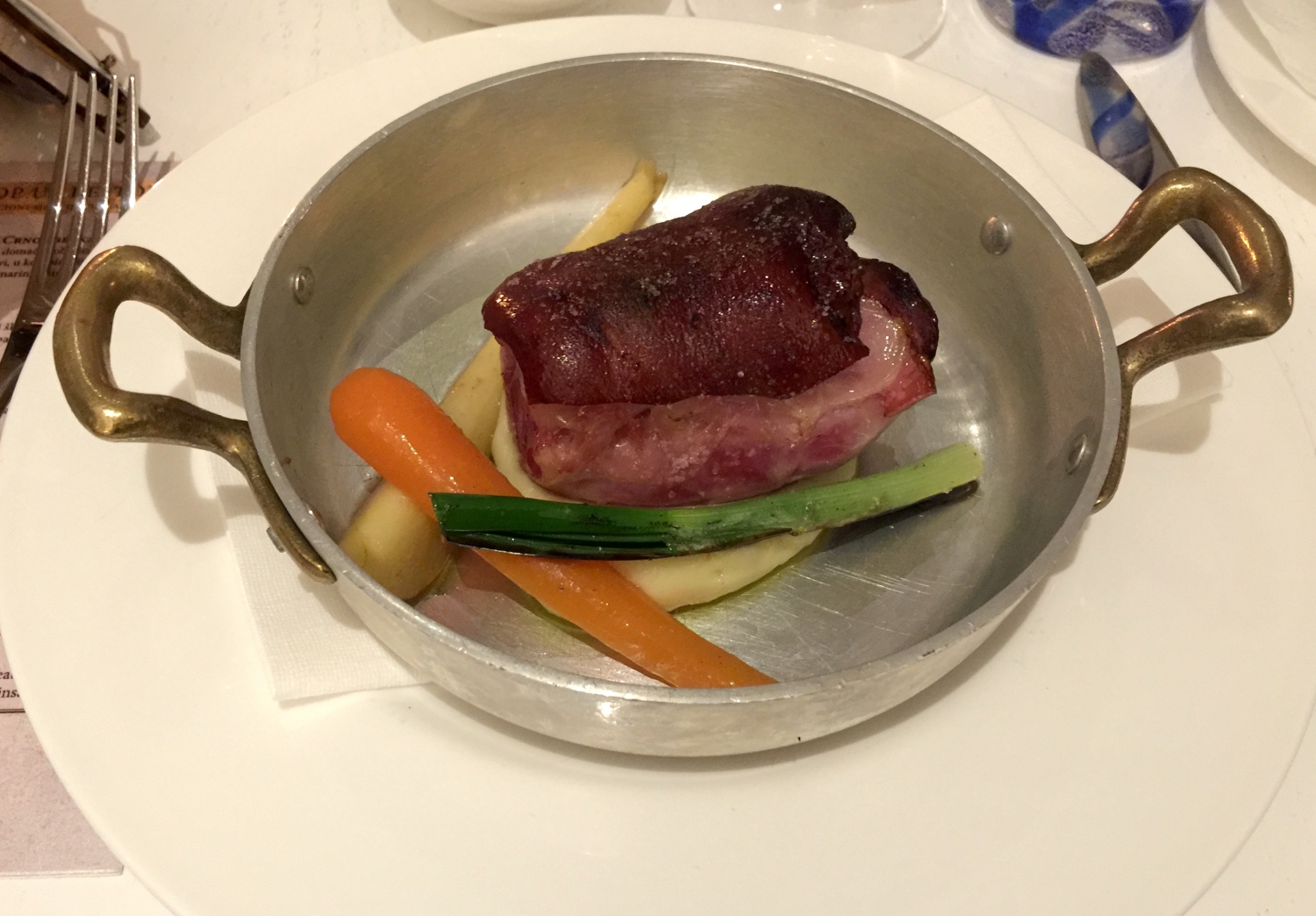 The finale was super sweet! Ms Elena, who was our host and organiser of the dinner, is obviously a multi-tasker as she was the one who assisted in the kitchen and prepared a traditional Boka Bay cake called Rozata. Besides this one, our other host Dragana made sure to deliver 2 other traditional cakes, which were cooked and prepared by her mom who owns a cake shop for 23 years. One was cake 'della nonna', a traditional Mediterranean recipe and the other one was a cake made with carob and chocolate ÃÂ¢ÃÂÃÂ again one of the favourites in the Boka Bay cuisine. The cakes were delicious, soft, flavoured-full and traditionally decorated, so we really enjoyed!ÃÂ 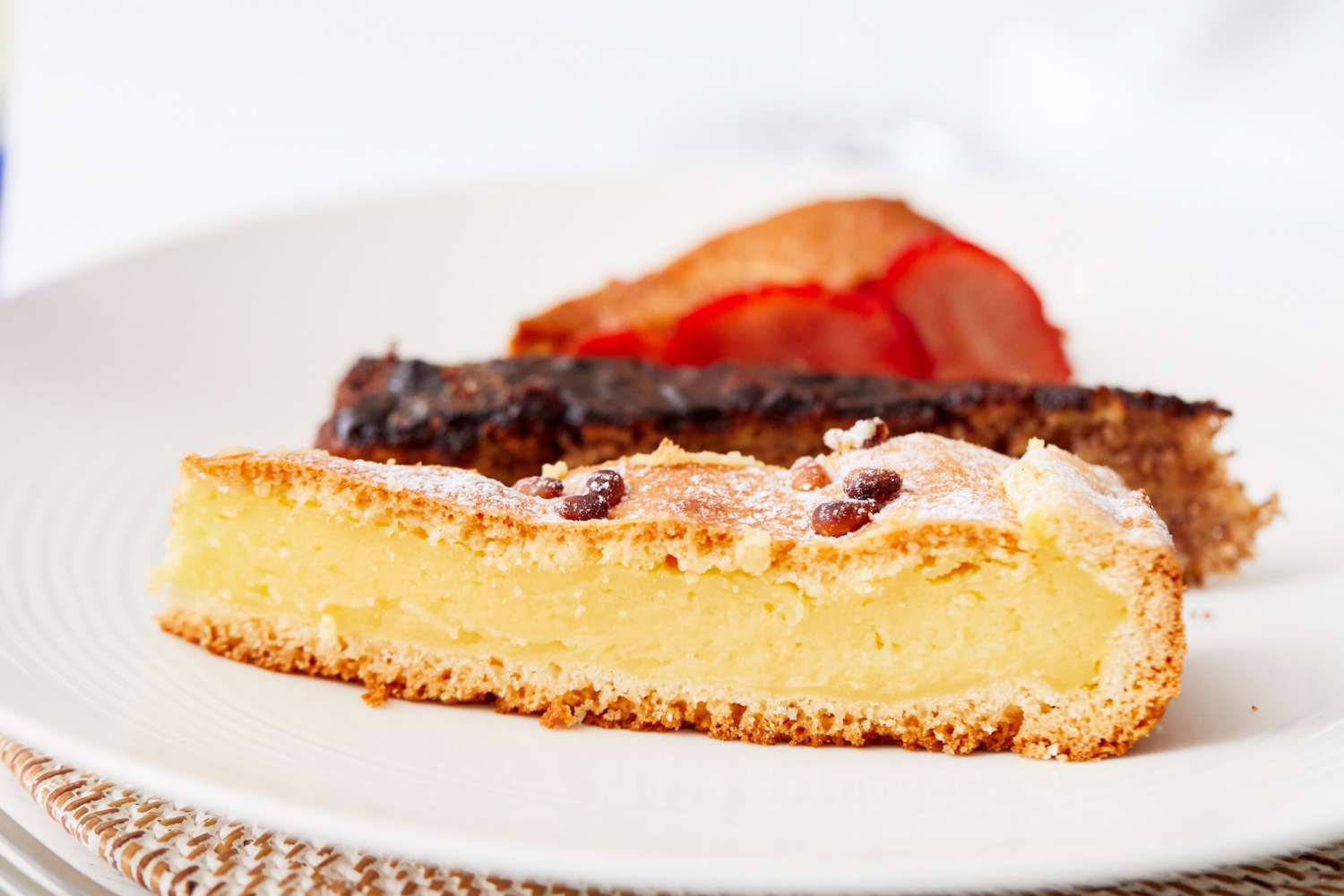 The whole dinner was followed with the appropriate wine selection and the staff was superb, making you feel like a star!ÃÂ

I also wanted to thank Mr Kai Dieckmann, the director of the Regent hotel, to be able to recognise the importance of our heritage even if he is not originally from Montenegro, but also for a nice chat we had and for the TV-kitchen shows he recommended to me. ÃÂ¢ÃÂÃÂº

Other than that, it was beautiful to spend some time with my colleagues from Porto Montenegro and Total Montenegro News, so thank you Anita and Antonela.

Last, but not least, is a dear photographer Zoran, who made amazing visual memories from this event! Assuming that the Pop-Up restaurant has an amazing intimate atmosphere and that the lights are not that bright, us who came with phone cameras ended up depending on Zoran, but he was more than generous and you will enjoy his amazing work that added more value to the whole dinner! So, thanks for the photos!

Stay tuned and follow this editorial as we are going to treat you with some more exciting news once the contest winners are announced and a new dinner with their recipes is planned! ÃÂ¢ÃÂÃÂº
Written by: Andjela
PUBLISHED: Apr 22nd 2022