'Let each soldier, coming from the place where the grapevine could grow, plant two hundred vines.'

Who were the first to plant grapevines in Montenegro? Ancient Greeks, Romans, Slavs? Or perhaps some indigenous people who had lived here much earlier.

We may never know and maybe it is of no great importance, because for thousands of years the grapevines have been growing here, creating the wine which tells the story about its origins: âThis is Montenegro - the Country of Winesâ!

The viticulture here has been developed over a long period of time and by the first half of the 19th century, the Montenegrin king Nikola Petrovic had expressed his support with the words: âLet each soldier, coming from the place where the grapevine could grow, plant two hundred vines.â

The new age for Montenegrin wines had begun. At the Wine Exhibition in London, held in 1907, the Montenegrin âVranacâ won the first prize award and since the second half of the 20th century, the development of viticulture in Montenegro has been led by the company '13th July - Plantazeâ.

The wines of âPlantazeâ reflect the unique Montenegrin area, located amongst the Adriatic sea, Lake Skadar and high mountains in the hinterland with a micro climate that stretches across the broad valley of the Bojana River to Podgorica and creating the conditions for producing luxurious wines with a unique character.

The people who work for âPlantazeâ believe that the wines are âthe children of âTerroirâ (environment) and that the character and quality of wines originate directly from the vineyards and so they are passionate about making the wines truly express their origin.

And that is how they have managed to make the best Montenegrin wines over the past fifty years - wines with a distinctive character given to them by the powerful influence of the âterroirâ. 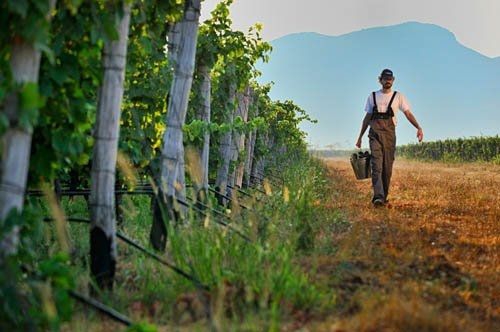 The vineyard of the Äemovsko field is located to the south - east from Podgorica, between the MoraÄa and Cijevna rivers. It covers the surface of 2.310 ha, making it the largest European vineyard as a single complex, planted with over 11.5 million of the grapevines. It borders with the range of bare, limestone hills, defining it as a rocky basin with particularly hot and dry summers and slightly colder winters than experienced in the coastal strip. Extremely low amounts of rainfall and an abundance of sunshine complete the picture of this area which you may imagine in the colours and sounds of hot summer.
Another challenge to which the grapevines face is the soil, hard and skeletal, made of  chalky limestone, intertwined with sand and gravel, with a lot of polished round pebbles. In such an epic battle between the grapevines and the stones, the authentic âPlantazeâ wines have been made, the wines are full-bodied with a luxurious bouquet, proving the uniqueness of the vineyard where they were born.
Thanks to this extraordinary area, soil composition and favourable location, the indigenous Montenegrin grape varieties â Vranac and KrstaÄ have been successfully grown in the âPlantazeâ vineyards as well as the varieties known all over the world such as: Chardonnay, Sauvignon Blanc, Caberne Sauvignon, Merlot, Alicant Bouchet, Negro Amaro, Marselan, Petit Verdot and others.
Vranac is an ancient Montenegrin grape variety, the true origin of which has been hidden in the depths of history. Vranac is the king of the imperial kingdom of wines in the Äemovsko field, viticultural and covers up to 70% of the vineyards. It is produced in eight different varieties of wine such as: Montenegrin Vranac, Vranac pro Corde, Vranac Barrique, Vranac Reserve, Vladika, Premijer, Royal Vranac and sweet Medun.
KrstaÄ is grown in the microlocality, called Nikolj Crkva in the Äemovsko field, (all efforts to grow it in other world areas, have been fruitless. âPlantaÅ¾eâ is the only winery in the world, to grow KrstaÄ and make the wine of the same name.
A new dimension of the wines from the Äemovsko field has begun with the opening of the majestic wine cellar âÅ ipÄanikâ. The old military airport was converted into an impressive wine treasury, based on the principle of the French chateaux, because the wine cellar is located in the middle of the vineyards, in the same country, on the same rock, from which the grapevines grow. The cellar is located at an average depth over 30 m underground. Its form is like a spiral tunnel, 356 m long, 13. 5 m wide and 7 m high. In this impressive space, covering 7.000 m2, the wine is tended to in the perfect climatic and technological conditions. Two million litres of wine, age and mature in the wooden barrels.
Wine roads are most often, comprised of paths and landscapes, culture and customs, wine and gastronomy in a certain wine region. However, it is a rarity to experience a whole area within one winery only and it may come true through a special wine tourism program called âWINE ROADâ, organized by the winery â13 July - PlantaÅ¾eâ. Within different thematic programs, there is a possibility to visit three different cellars, vinotheques and restaurants of the âPlantaÅ¾eâ - through the authentic world of odours and tastes of the Montenegrin land.
Besides the specialties of Lake Skadar, carp and bleak, fresh sea fruits and the finest Adriatic types of fish, the best Montenegrin prosciutto and exquisite local cheese come from the mountains. The local specialties are accompanied with the wide range of 'PlantaÅ¾e' wines - from the sparkling to the whites - fresh or barrique, through refreshing rose wines to the reds - fruity and easy drinking or powerful and aged wines to the special, sweet wines. For the end, there is the authentic Montenegrin grape, made of the Vranac grape variety.
All visitors to the wine cellar âÅ ipÄanikâ have the opportunity to experince the impressive atmosphere of the unique viticultural wine cellar in Europe, enjoying the unforgettable smells and tastes - in the âbouquetâ (special offer for visiting the cellar) of Montenegro. Choosing the appropriate program of the wine tasting, the guests discover the authentic world of our autochtonous grape varieties as well as winery's committment, tradition and philosophy of wines and they have the opportunity to sail on the sea of vineyards in an immense Äemovsko field in which Vranac rules - the national symbol of Montenegro.

My Guide Montenegro visited the 'Å ipÄanik' recently and we were impressed with what this place has to offer. It really is a unique experience. From the entrance set within green fields with a path that goes through to the yard, where the cellar is situated, amongst beautiful plants: olives, lavender - it looked promising. When you approach the doorway, it looks almost unreal. The temperature drops, (set for the wines sake) and all you can see around you are barrels, full with numerous sorts of wines.

There is a huge dining room where you get the chance to taste the wines with your host or taste some national specialties. Inside, it feels like the King's dining room, with chandeliers, high-backed chairs and an enormous table with velvet tablecloth.
Many stories and legends were told to us! But the one we remember the best is of the 'Barrique' production. Most of the barrels in the cellar were especially made for Barrique production. The Barrels are burned from the inside which adds an aroma to the wine.  These barrels can only be used for maximum of 3 times and then they have to be transform to another use.
Barrique is one of the rarest winers of the 'PlantaÅ¾e' production which is why you can only usually buy this wine in their restaurants on the Skadar lake or Mareza river.
To complete the experience why not take the small train that will take you through the vineyards, and transport through the rich environment that goes in to producing the distinctive wine of PlantaÅ¾e, wines which are now becoming recognised around the world.
Written by: Andjela
PUBLISHED: Apr 22nd 2022