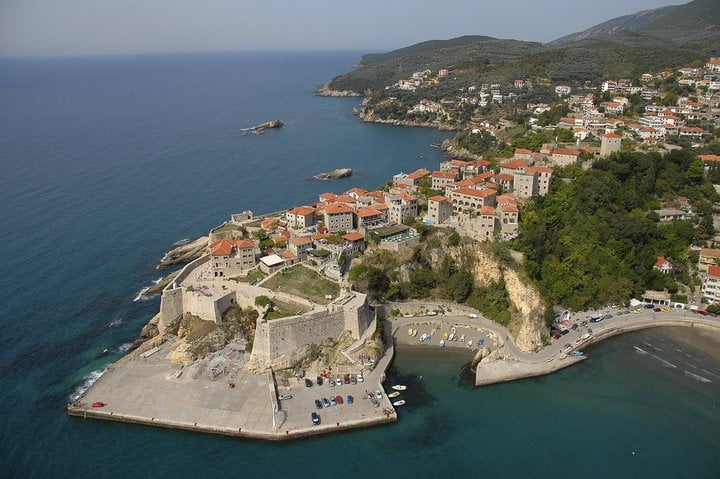 Places of interest
The Old Town of Ulcinj is one of the oldest towns in the Adriatic. It was founded in the 5th century BC by the people of Colchis, which is why it was originally named Colchinium. In the 2nd century, it was conquered by the Romans from the Illyrian tribe Olcinijatas and, the then ancient city of Colchinium became Olcinium. During the Roman rule, Olcinium received special status, as a city with special privileges, and later as a city with an independent status. Due to its exceptional geographical position, relief and mild climate, it has always been the target of great conquerors. The Old Town is surrounded by thick stone walls and fortresses, which have been the guardians of Ulcinj’s history, culture, and traditions for centuries.

Among several squares, the most interesting is Slave Square (Trg Robova), where pirates used to bring and sell slaves. It is believed that the Spanish writer Miguel de Cervantes spent 5 years captured in Ulcinj. It is also believed that he wrote his famous novel 'Don Quixote', right here, and gave the girl the name Dulcinea, after the then name of the city, Dulcinium. In the Old Town of Ulcinj, the famous tower of Balšić is located. Although it was never a real capital, Ulcinj was a favourite destination used by the rulers of Zeta for their residences.

After Venice and Dubrovnik, Ulcinj was the third fleet and one of the favourite pirate destinations. There is an interesting legend about the famous pirate Lika Ceni, which is even today often mentioned by the people as an unusual event. Lika Ceni was one of the most famous pirate leaders. On one occasion, Ceni sank a ship carrying pilgrims who were travelling on a pilgrimage to Mecca. It was a very tragic event that resonated outside Ulcinj. Namely, when the Turkish sultan heard about the great accident, he ordered that Lika Ceni be found and imprisoned. The Sultan also announced that he would reward anyone who captures or kills him. However, just another, also very dangerous pirate appeared at sea – Lambro. Very dangerous, fearless, and skilled pirate, Lambro soon became a real 'sea monster' for many merchant ships and naval fleets. News of Lambro's atrocities quickly reached the Turkish Sultan himself. As the damage done by Lambro's company was enormous, the Sultan soon announced that he would give a very rich reward to whoever captured or killed Lambro. However, time passed and the Sultan could not find Lambro. The only thing left for him at that moment was to send a message to Lika Ceni, that he would pardon him if he managed to destroy Lambro. Lika Ceni pledged to the Sultan that he would 'either capture Lambro or die himself'. After some time, Ceni managed to kill Lambro. For his service and loyalty, the Turkish Sultan spared Ceni’s life, giving him the title of captain.