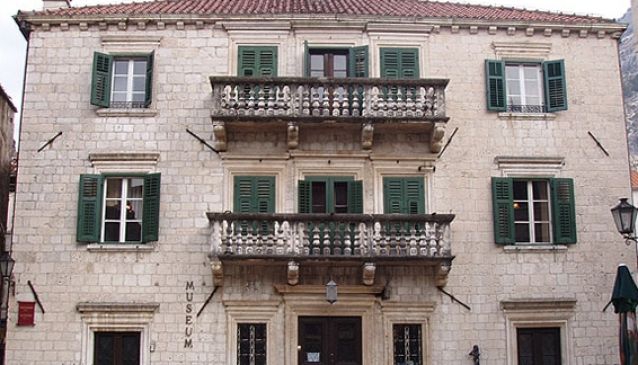 The Maritime Museum was founded in 1880, but not fully opened until 1900. It is situated within the beautiful, Baroque-style palace of the Grgurina family, which was violently torn apart by an earthquake in 1979. Now fully restored, but baring the scars of Kotor's past, the museum includes a variety of exhibits depicting the history of the bay and Montenegro.

The entrance hall is an enchanting display of bronze panels, which depict a selection of the most distinguished figures of Kotor's history. There are also preserved drawing rooms of the celebrated Ivelic and Florio families.

Further into the palace, the exhibitions take a more bloodthirsty tone, with a display of ancient weapons used in battle by the people of Kotor against the numerous pirates who threatened their town, and a room of original photos depicting Montenegro's involvement in WW1.

The martime history of the town is on show throughout the museum, with scale models of numerous ships and information plaques. The most interesting however, is a room which contains an artistic depiction of the development of steam ships in Kotor. Rendered in oils, models and photographs, special emphasis is given to Kotor-based company Jugooceanija.