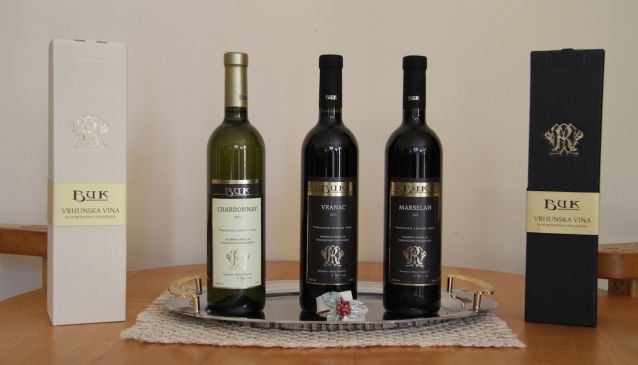 Winery Buk is located in the beautiful village Bukovik in the subregion Crmnica, well known by the wine production. The Buk Winery was established in 2010 by family Rajkovic. This family has a long tradition in wine production, over 50 years long, but their registered their company only in 2010.

The name of the company is derived from the village name Bukovik. Buk means spring in Montenegrin language and that is how this village was named - by the spring (buk) - Bukovik!

Grandma Ikana had her own tavern in Cetinje (The Old Royal Capital of Montenegro) for which Rajkovic family had produced wine and brandy. They would then put the load into the bellows and transfer it to Cetinje on the donkey through the Crmnica region (old road which is used even today in between the villages and one of the most exciting hiking tours in Montenegro). This old road connects Bar and Virpazar with Petrovac and Budva and on the other side you can reach Cetinje. Crmnica is just in the middle of Montenegro, connecting all the cities mentioned above. The region consists of the 27 villages and is the most fertile region of Montenegro. It is well known for autochthonous wine, the Vranac.

Vineyards Marselan and Chardonnay are at 700 m altitude, where is an amazing impact of 3 different climates from the Mediterranean sea, Skadar lake and Montenegrin mountains. There is a lot of sunlight and the difference between day and night temperature is about 7 degrees Celsius.

Village Bukovik lays at 250 m altitude, 7 km away from Skadar lake and 19 km away from the Mediterranean sea. Summer temperature of the spring water is 14-15 degrees Celsius. Bukovik is close to both of the Montenegrin airports (Podgorica and Tivat), and also close to the port of Bar and Old Royal Capital - Cetinje. Rijeka Crnojevica is pretty close too.

Family Rajkovic has various types of fruits on their estate, which are used for brandy production, but also for the delicious refreshments. Beside grapes, they have apples, pears, peaches, nectarines, cherries, lemons, oranges, tangerines, figs, walnuts etc. Brandy is made of grapes and Montenegrin name for it is Loza.

Vranac, as an indigenous grape variety in Montenegro, is also a base in wine production in family Rajkovic. It was their first product officially established in 2010 - Vranac 2008 and Vranac 2009.

Beside Vranac, they are the rare ones to produce Marselan wine. This wine is french red wine obtained by crossing Cabernet Sauvignon and Grenach Noir. Marselan was established in 2010 - Marselan 2008 and Marselan 2009.

Rose by Buk Winery is made out of three different grapes variety, but they keep it as a secret. They established it in 2013, for the first time.

Chardonnay is also wine variety made by Buk. First one was placed on the market in 2010.

Brandy by Buk, which is mostly grape brandy, is made for the private usage, but they intend to change that as well and to put the brandy on the market too. For now, if you are Winery Buk's guest, you can taste this.

In the Buk Winery there is a special room made for wine and brandy degustation. If you are traveling through this region, it would be great memory from your trip to Montenegro. The room is well equiped to welcome smaller groups, so do not hesitate to book your visit!

Beside home made drinks, you can try locally made cheese, ham, bread, smoked carp and famous Patispanj cake.