Many things attract tourists to come and visit Montenegro; its clean and sandy beaches, grandiose mountains and dense green forests, fast rivers, and lakes, monasteries and culture-historical buildings, pleasant climate, but also a variety of food. Montenegrins are known as great gourmets who enjoy consuming food as much as they enjoy preparing it.

Throughout history, Montenegrin cuisine has been influenced by Italian, Turkish, Hungarian, and other cuisines. These influences are best reflected in the way the dishes are prepared and in which areas they are prepared. For example, along the Adriatic coast, Italian and mostly Venetian influence is noticed, especially when preparing the Mediterranean seafood like black risotto or fish specialities. Turkey's big influence is visible in the preparation of pies, kebabs, stuffed peppers, baklavas, etc, in the northern parts of the country; when preparing goulash, and other kinds of similar dishes like sataraš or đuveč (güveç or Balkan Ratatouille), the influence of Hungarian cuisine is felt.

Still, Montenegro managed to keep its cuisine originality which is visible in the wide array of its national dishes. Traditional Montenegrin food possesses a level of authenticity based on quite simple recipes that consist of fresh and organic ingredients. Each region has its traditional specialities, and the locals are more than thrilled to show off their culinary skills. A typical Montenegrin table consists of various meat and dairy products, such as pork, mutton, lamb, and beef, whether it is smoked, roasted of fresh; as an indispensable part there is the unique sort of thick cream called kajmak or skorup, and various types of cheese.

The trademark of Montenegro’s cuisine is the Njeguški prosciutto, together with “Pljevaljski Cheese”, “Kolašin Layered Cheese”, and “Durmitorski Skorup”, which are on the list of Montenegrin products protected by the quality label at the national level. Besides these recognisable products, here are some of the Montenegrin traditional dishes.

Kačamak or porridge is a squashy, strong dish made from wheat, buckwheat, barley, or cornflour and is usually served with cheese and sour milk. “Smočani kačamak” is made of potatoes, and cream (kajmak) or melted cheese, which are added while being slowly mixed with a wooden spoon. There are different variations of this meal, depending on the region where it is prepared. For example, in the northern parts, kačamak is made of potatoes and wheat (rarely buckwheat) flour, and it’s considered that it is only prepared in this way in the area of Bjelasica, Sinjajevina, Durmitor and one part of Vasojevići. The so-called “tučeni kačamak” is made by mixing and “beating” the ingredients vigorously to make them blend perfectly. The method of preparation of this dish has remained the same as almost 200 years ago when it first appeared during the years of the great scarcity when there was not only a shortage of cheese, kajmak, and potatoes in the mountainous regions. This once "poor dish that was presented only in front of the family", today is the pride of Montenegrin traditional cuisine. 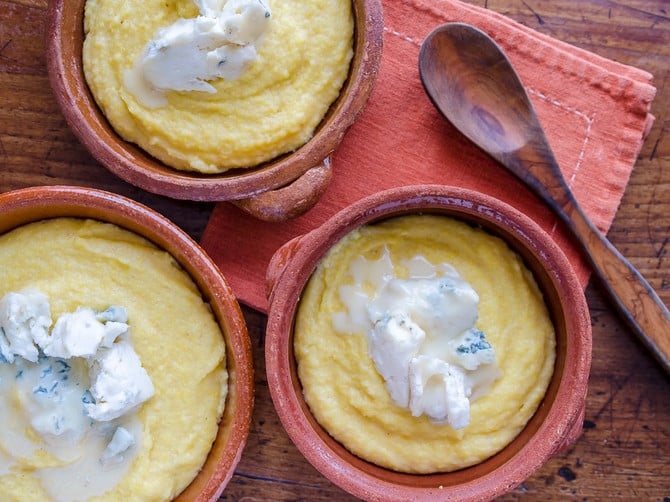 Cicvara is another dish of high energy value, made of corned flour mixed with cow’s cheese or kajmak until the fat is released. Boiled potatoes and sour milk are usually served with the dish, which is generally prepared for breakfast. This is another meal used to be made in the villages in the mountains, due to its high caloric energy value. What was found in the house at the moment was being put into the dish, and the most basic ingredients are milk, cheese and flour, with the addition of cream cheese. In some northern parts of Montenegro, it is known under the name “Gotovac”. 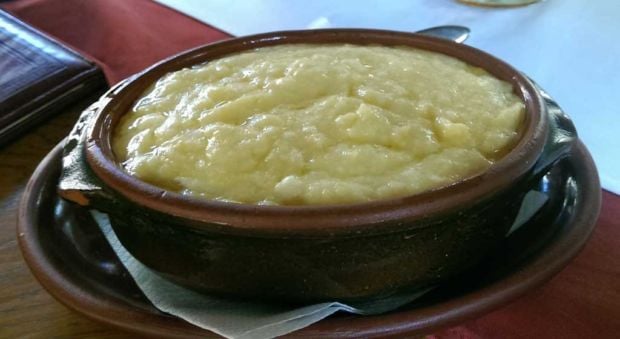 “Jagnjetina ispod sača” is one of the traditional meals which is still prepared in an almost ancient way: lamb (jagnjetina) together with potatoes, carrots, onions and other food supplements are put under a metal/iron cover (sač) which is later covered with embers and ashes. This is the most delicious way to prepare the lamb, as the aroma is retained, and the meat is evenly roasted most naturally. 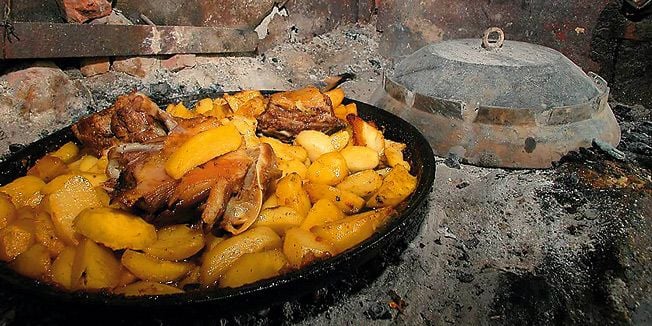 Njeguški steak or popularly known as Podgorički Popeci is another speciality of Montenegrin cuisine. The steak is made of a veal or pork schnitzel filled with Njeguški prosciutto and cheese. This dish was created in post-war Titograd (today’s Podgorica) by the Italian chefs Guglielmo Bafi Jatoni and his colleague Josip Balent. Since then, various variations have been made on this speciality, but what is certain is that the water will go to your mouth at the very thought of this dish. 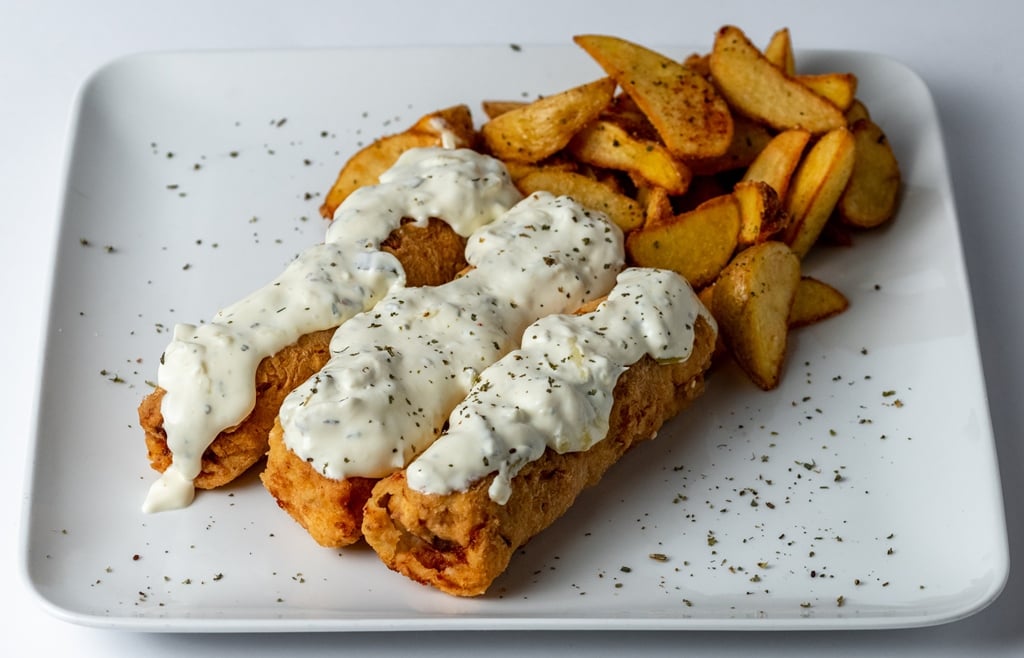 Sarma has become a traditional dish of Balkan cuisine, which is originally a Turkish dish. However, the Balkan countries, including Montenegro, have modified and adapted this dish so that it is considered their traditional dish today. In Montenegro, sarma is made from minced meat, rice, and onion which is rolled in sauerkraut or grape leaves, again depending on the region. What makes our sarma different from Turkish sarma is not only the ingredients but also the size, where our sarma is much bigger. If you’re interested to know more about Montenegrin dishes which were made under Turkish influence, you can read it on our website. 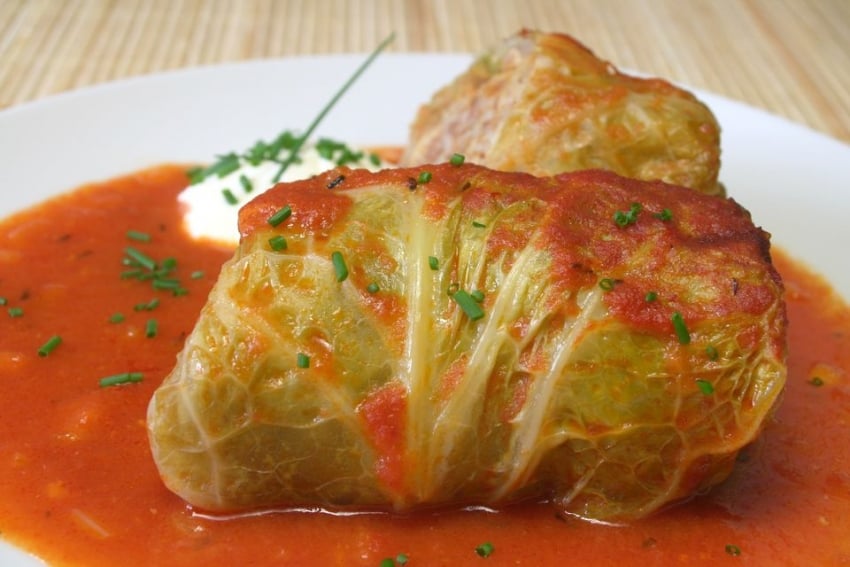 Priganice are dough balls fried in oil or fat/grease, which have remained as one of the most beloved specialities in the Montenegrin cuisine. Their simple texture and the ease of combining with other side dishes are considered the reasons for their popularity. Montenegrin housewives most often use bread dough, as they are served with homemade cheese, honey and the famous Montenegrin prosciutto. In some areas, they are served with sugar. They are made in different sizes, so in the northern part of Montenegro, they are a little bigger, compared to the coastal part where priganice are made smaller and more round. 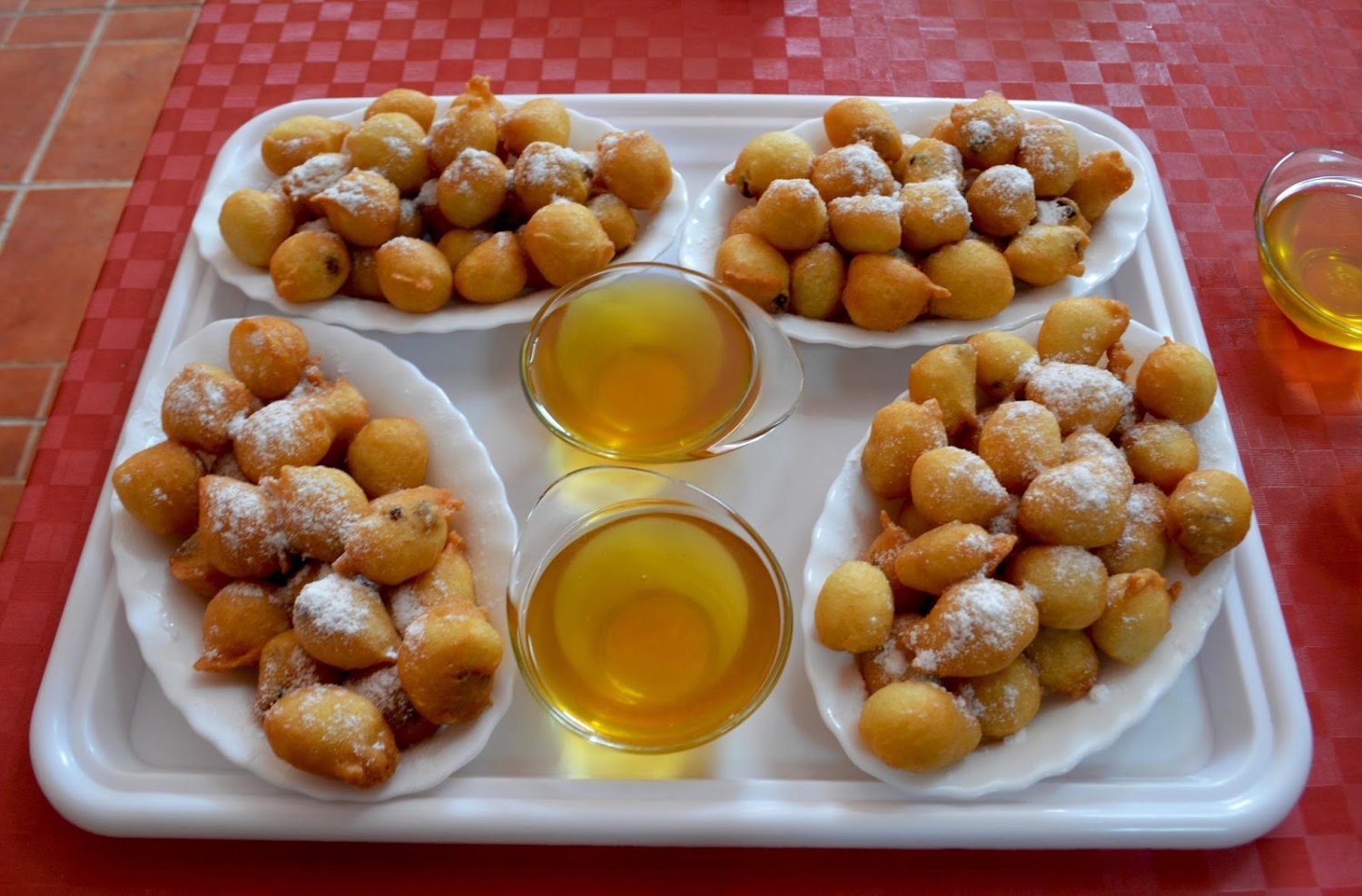 And what is your favourite traditional Montenegrin dish?
Written by: Irena
PUBLISHED: Apr 21st 2022