The Best Things to do in the Bay of Kotor


Probably the best time for great hiking trips in Montenegro is autumn! When the days are still quite long and sunny, with a mild climate and an approximate temperature of about 20 degrees. That reminds me of a great trip we had together with a group of adventurers from Niksic, called Nature Lovers. We met close to the hospital in Kotor, made sure we are all set to go and the tour started. We decided to climb up the Vrmac hill, that will treat us with breathtaking views of Boka Bay and the city of Kotor. 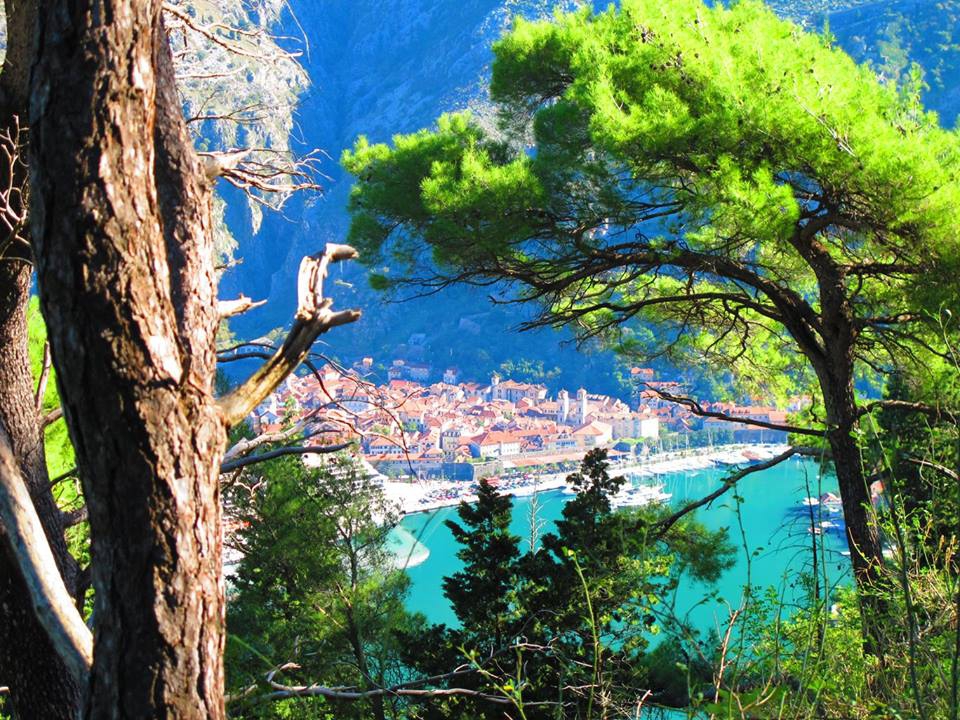 Can you see the Cathedral?

The city of Kotor is an old monumental town, ruled by various emperors through history. Today, it's a small but modern port, for medium and small yachts and one dock for bigger ships and cruisers. It is not rare that boats put down their anchor in the middle of the bay due to the impossibility to be tied up in the marina as the boat is usually too big and the bay is too shallow. Kotor is surrounded by hills and mountains and Vrmac is one of them. 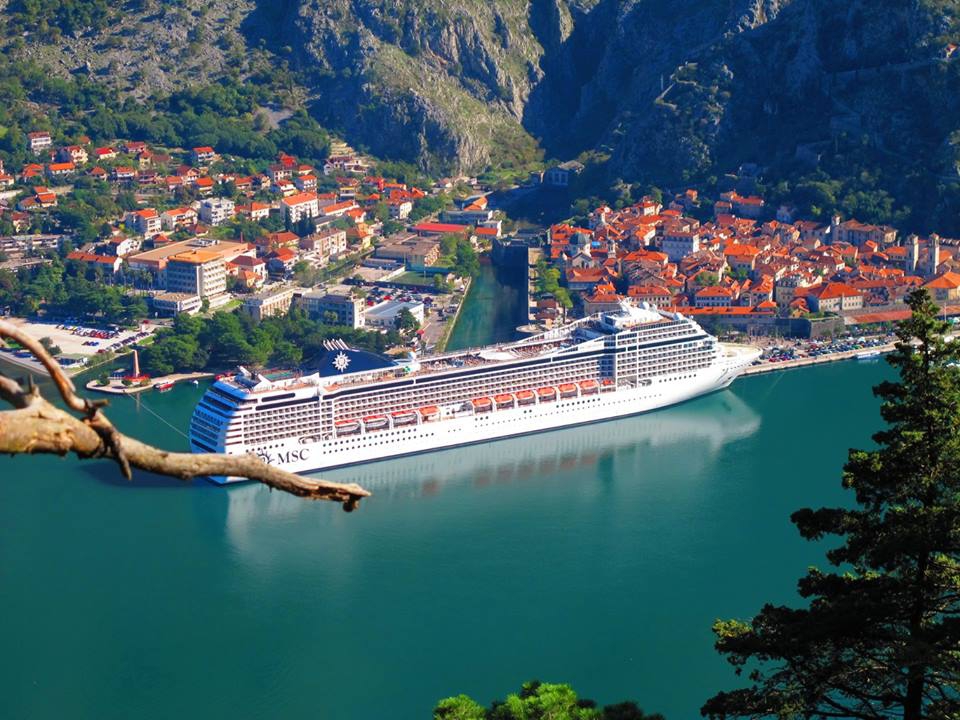 Port of Kotor and the Old Town

Vrmac, besides the amazing views over Kotor, is offering much more. In the woods at the top, you can do a barbecue and all the way up, the hill is very rich in nature so you can collect various fruits and even see some rare species such as Black Dalmatian Pine. 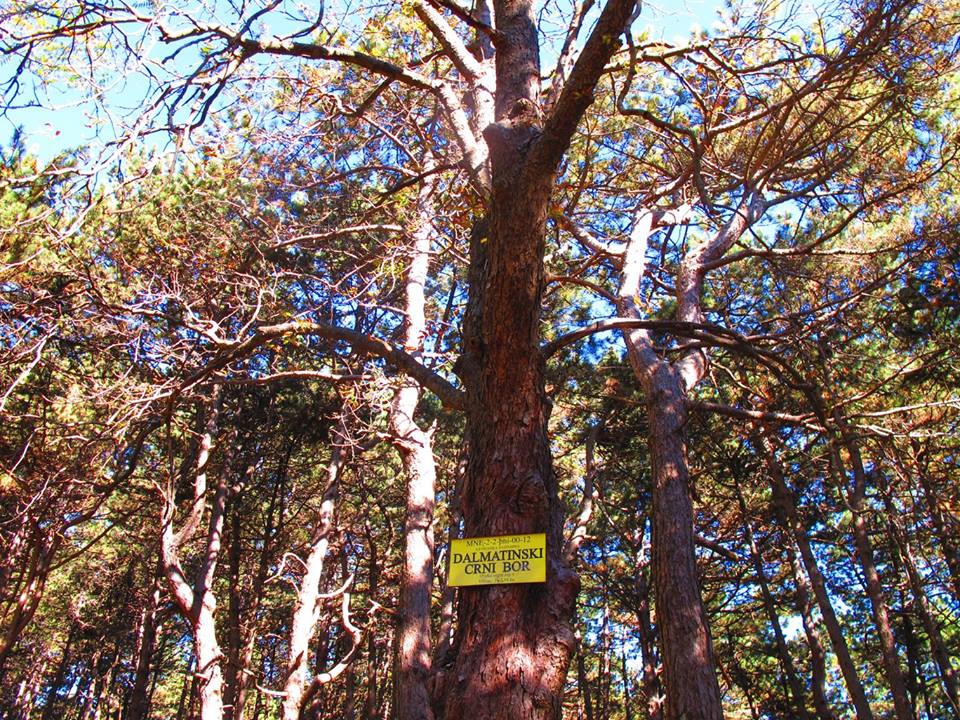 The first part of the hike started in one of the neighbourhoods in Kotor called Kukuriku city. We literally started climbing up in between houses as this is one of the newest hoods in Kotor, built after the big earthquake in 1979, and it's located just on the slopes of Vrmac. Above the houses, the trail is well marked and if you have at least some experience in hiking this should be a piece of cake to you. The trail goes up the hill in a form of serpentines and pretty steep ones! :) But, first treats are already here on this part of the trail. The view over the Old Town of Kotor is probably one of the most beautiful sights you can imagine. 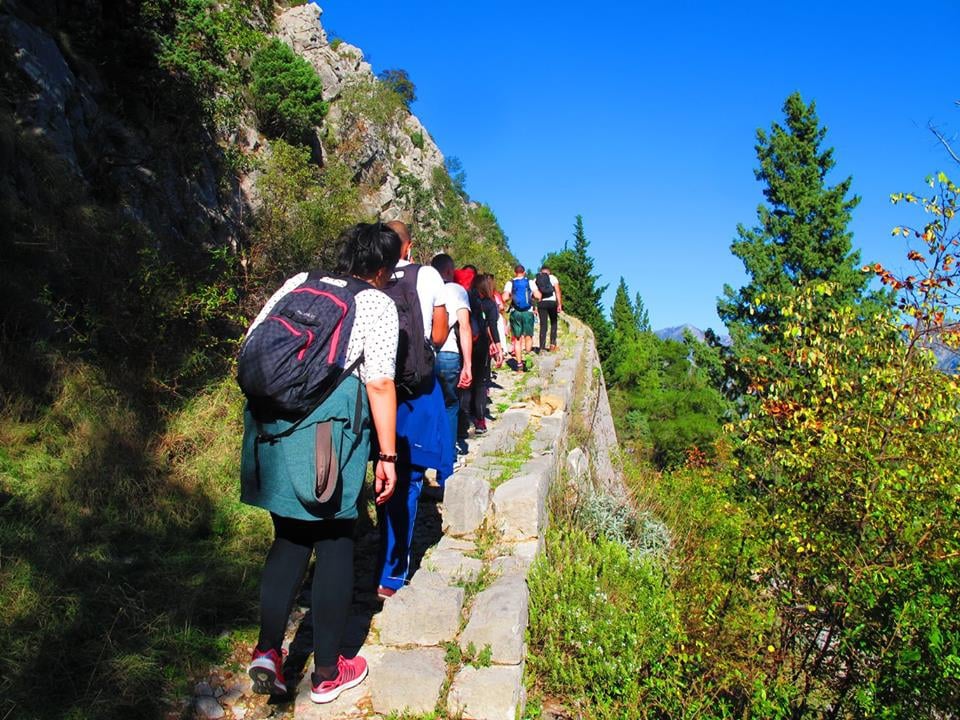 During this first part, the woods are still enough dense which is great as it gets quite hot on the autumn sun in Montenegro! After climbing the serpentines and a bit of the path through woods, we came to our first shortstop! The first part of the hike wasn't too long but was quite demanding, especially because we had various physical fitness in the group, and not all members could bear the same rhythm. 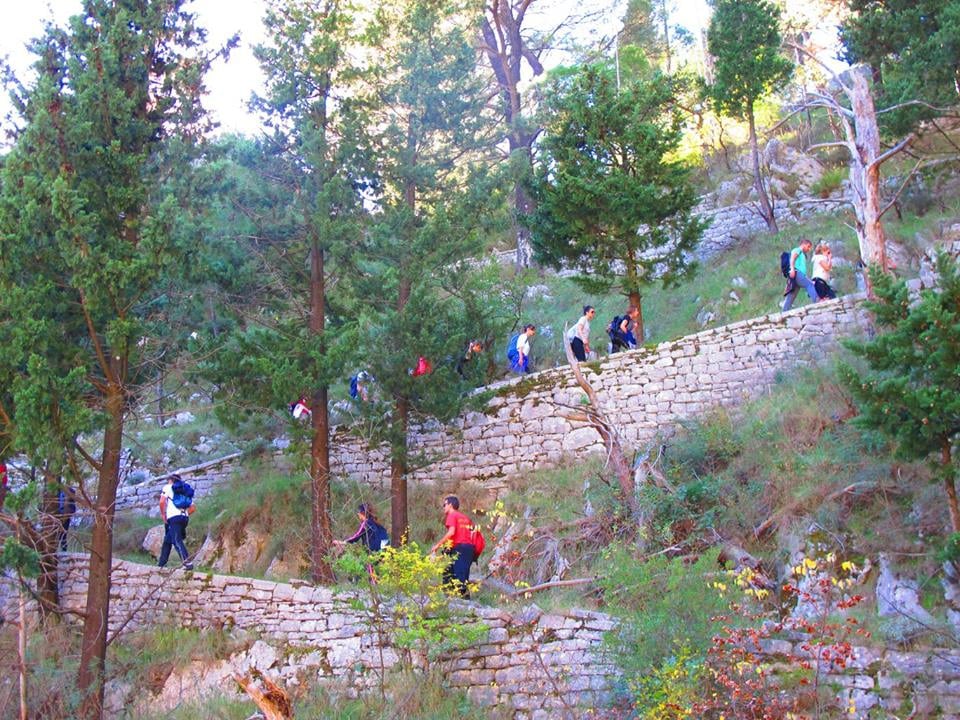 Shortstop is in the middle of the woods where the Black Dalmatian Pine grows. It's almost at the top of one of the slopes of Vrmac and it's a popular place for making barbecue with family as this part is reachable by car if you are coming from Tivat. From Kotor, you need to hike. :) From here, you can't see Kotor anymore, but you can now see the Tivat Bay, especially the airport, Sveti Marko island, Krasici and Lustica peninsula. 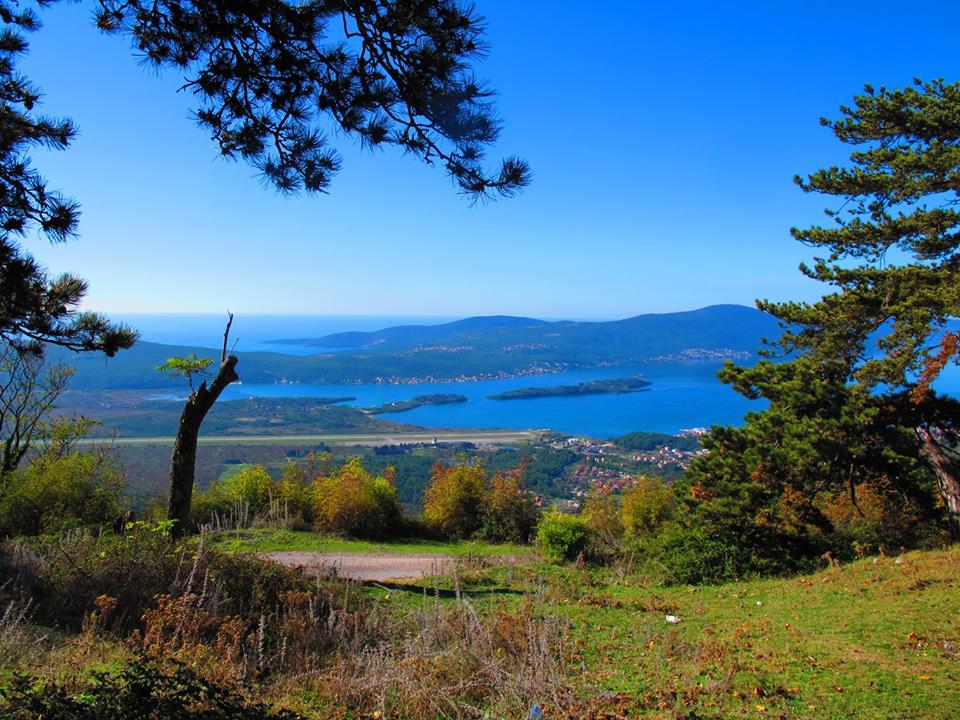 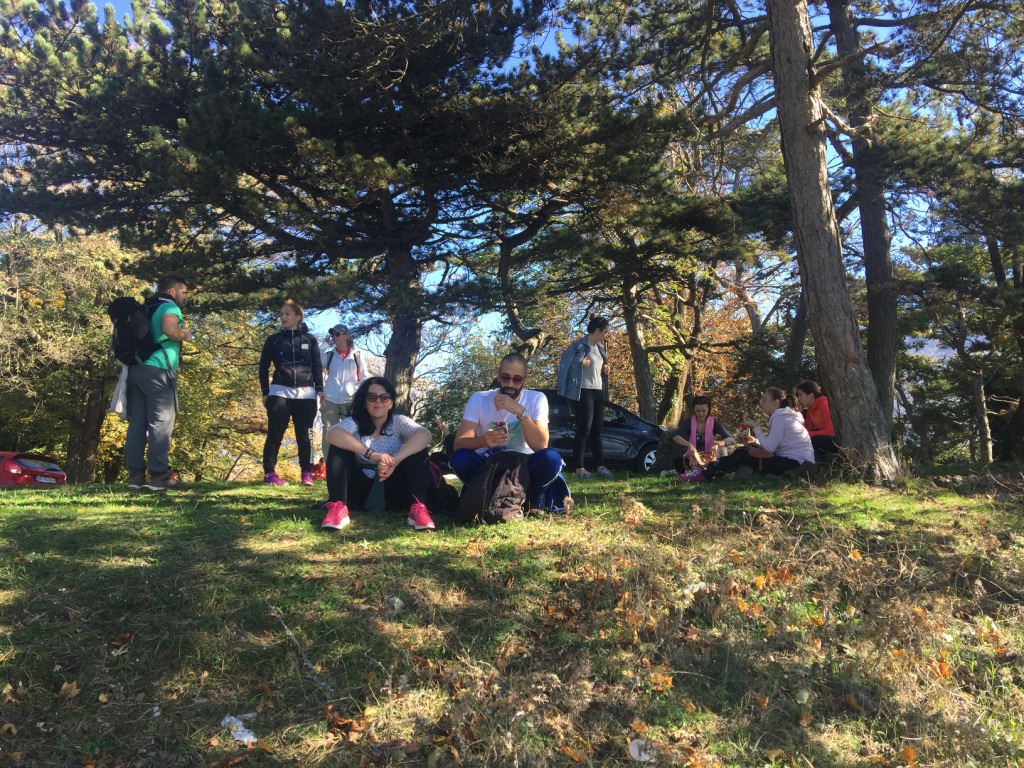 Relax in the nature/Short break 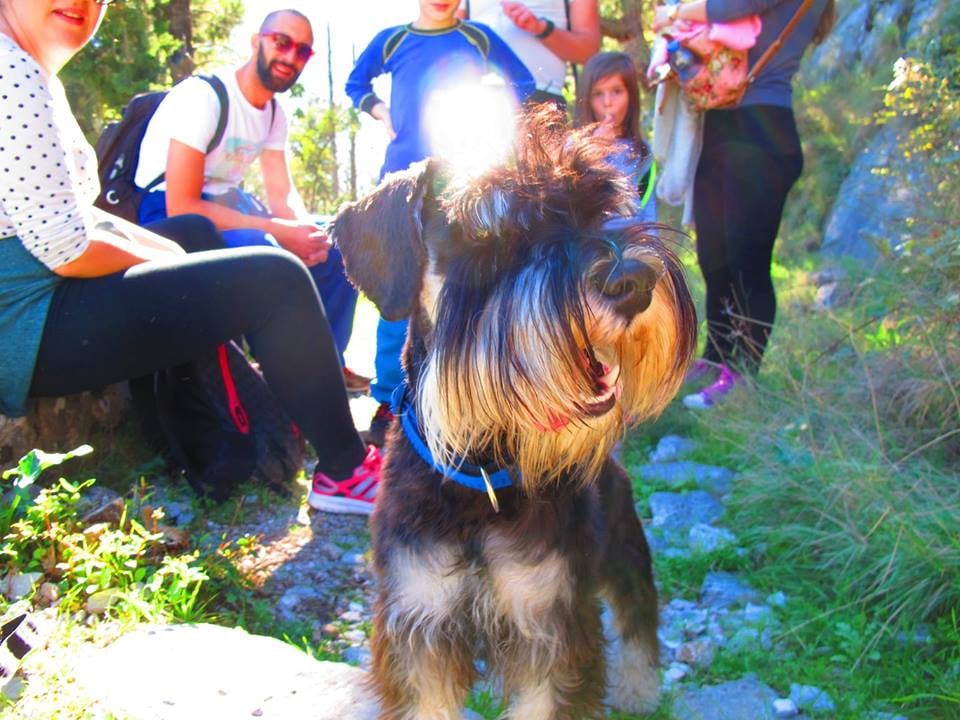 Our friend and follower - Floky

After this nice break here, we continued. Going further, you are passing the narrow path in the middle of the woods, going parallel along the city of Kotor, but here you are not able to see it, as one part of the hill is hiding it. After a short while, taking one turn to the left, you are still at the same forest narrow path, but you can now again see Kotor on your right and all the small villages that belong to it (Dobrota, Sveti Stasije, Orahovac etc.). There is a spot that kind of divides Vrmac in 2 hills, but it actually remains one all the time. We were now passing that imaginary line in between these 2 parts, where the 2nd part was more demanding as the hill was higher and less vegetated. The path is rockier at this stage with less vegetation, as we are at a higher altitude now, trying to reach the highest peak of Vrmac hill. This part is not as steep as the first one, but the terrain is more demanding, you need much more strength to walk over stones, instead of forest's leaves and soft soil. This part brings a title of the hardest part on the hike, actually the most demanding one, with the rocky terrain and no trees to keep us from the bright sunshine. 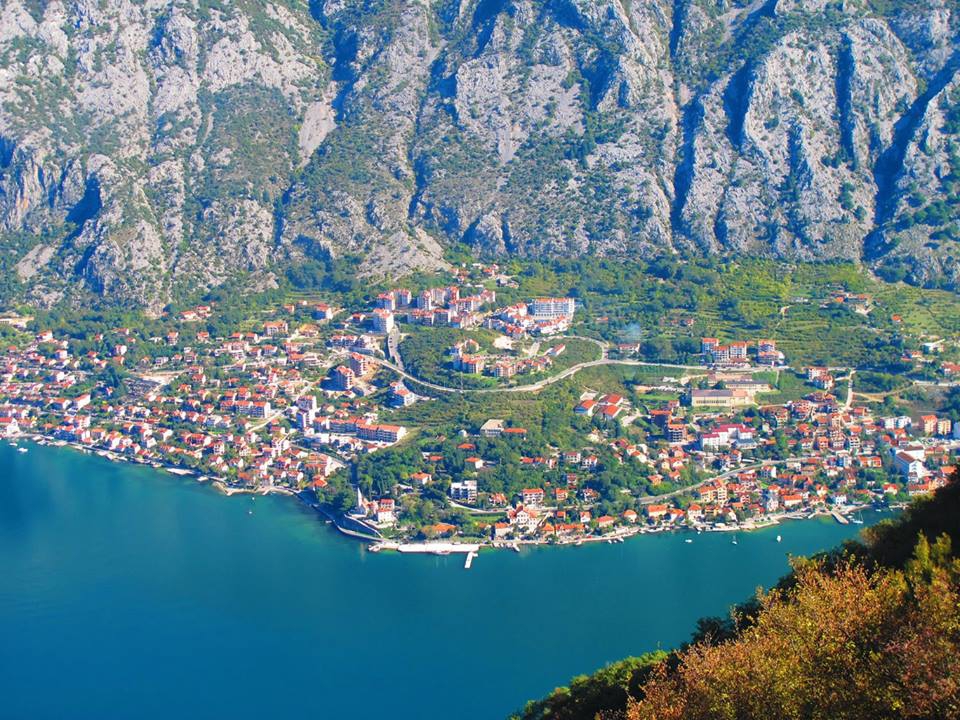 This part of the terrain is actually covered in rocks so that SUV cars can also come here, from Tivat, as on the top of Vrmac hill there are many antennas and electrical wires that need to be maintained from time to time. 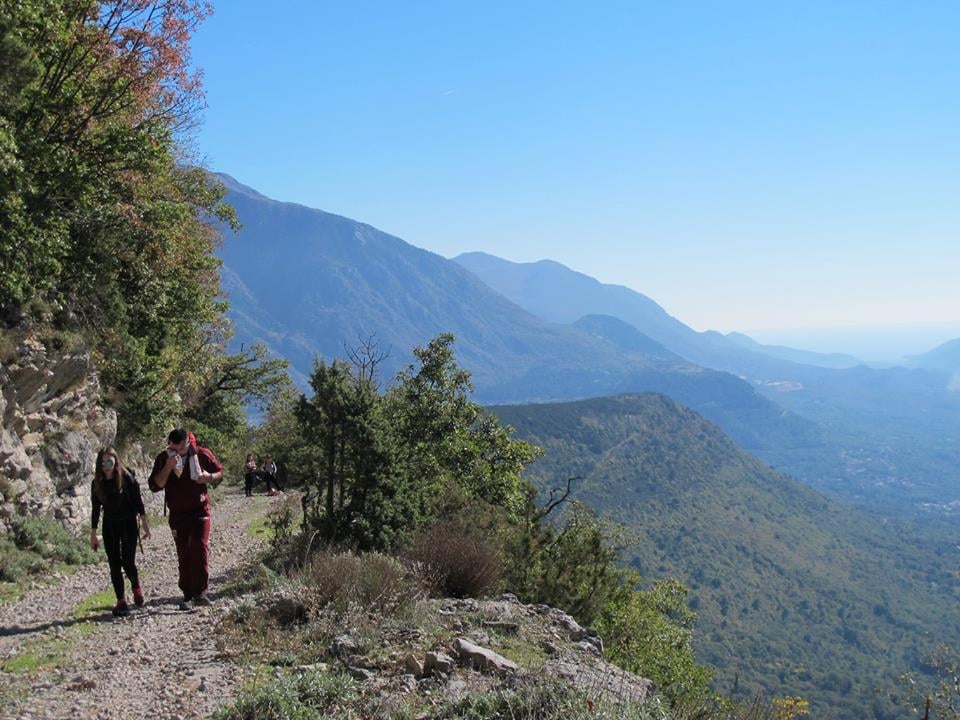 Almost an hour later, we reached greener part of the hill again, but this time it meant we are there - at the top of the Boka Bay or Boka Kotorska. Vrmac hill is indeed a great experience as it shows much more than one sort of natural habitat and making you think about how nature behaves and why. But, from the top, you can't think about the woods or paths or how physically demanding this was, you can only stand there breathless and admire this Adriatic jewel in front of you. Just in front, you are stuck with the beauty of Kotor literally choking you! The whole coast through Dobrota, Ljuta and Strp is uncovered to your admiration and it's the place from where you want to make a loooooot of photos. 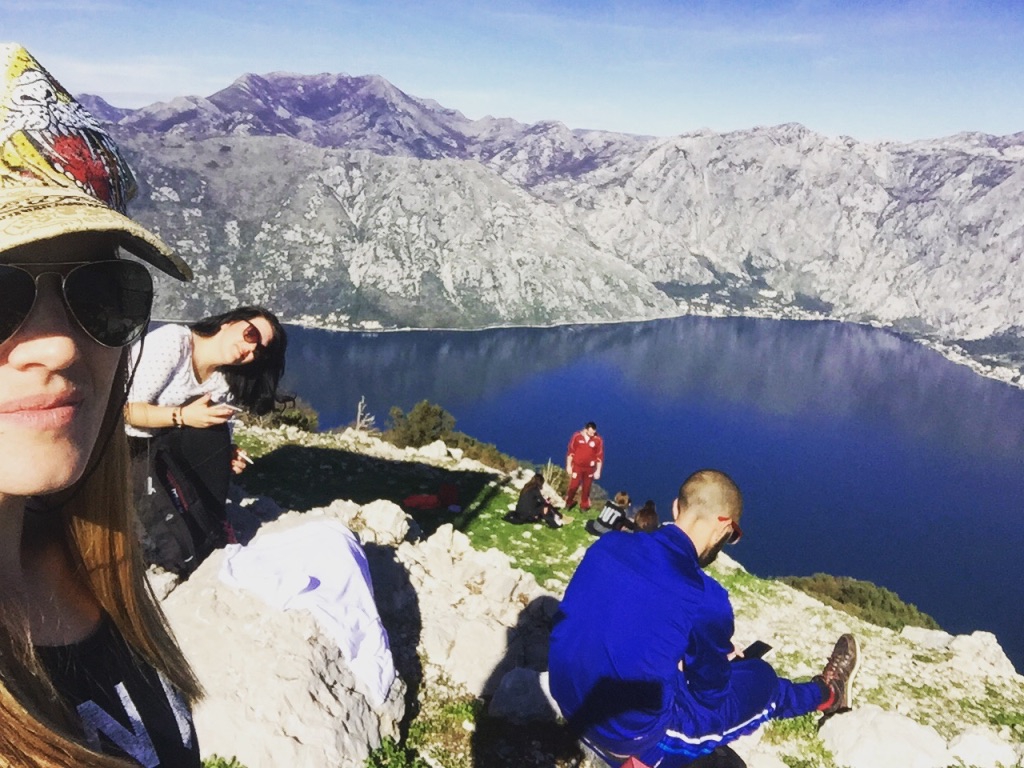 View over Dobrota, Orahovac and Ljuta from the top of Vrmac

Just behind you, another surprise! The view over Portonovi Marina and slopes of Prevlaka peninsula that is a natural border in between Croatian and Montenegrin waters. We mentioned how Kotor is a new cruising port in the Mediterranean? Well, a cruise ship was just leaving the bay when we reached the top of Vrmac hill. It's a great shot, isn't it? 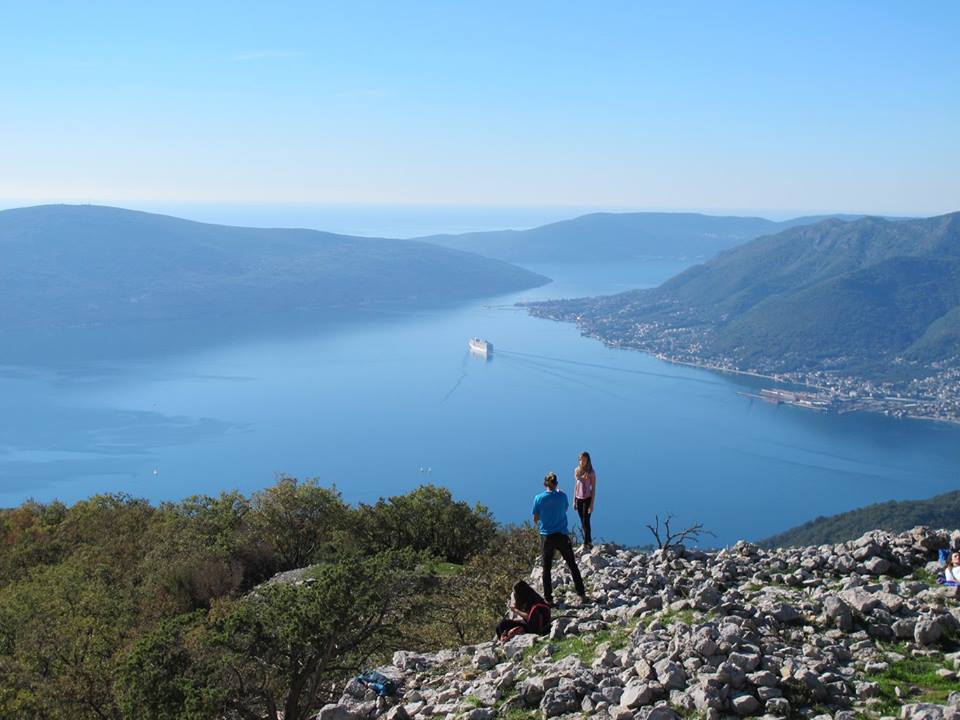 View over Portonovi Marina and a cruise ship leaving the bay

After we spent a while taking photos, we had some snacks and rested down on the grass to enjoy the sunshine! This day was a pure joy and 'bonding with nature time' is checked on the list for this month!

It was much easier on our way back, as the day was coming to its end and the sun was getting down. The atmosphere was vibrant, causing so much happiness out of nowhere like nature was happy that we visited. The road back had its great moments too, as you can see from the photos below. 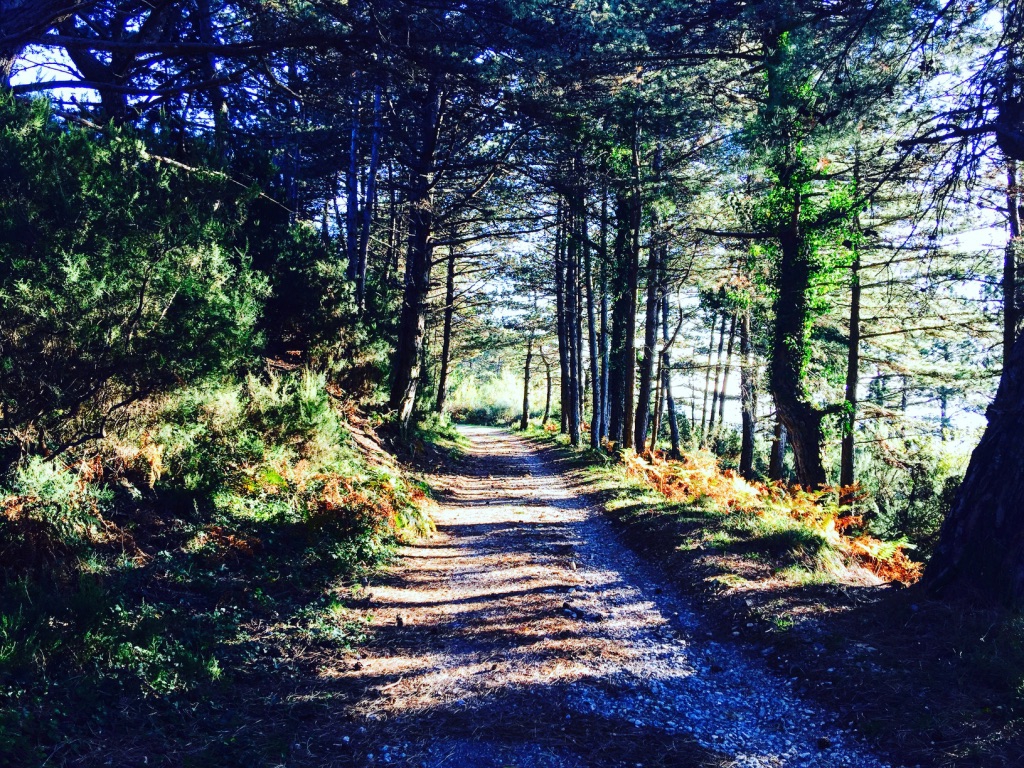 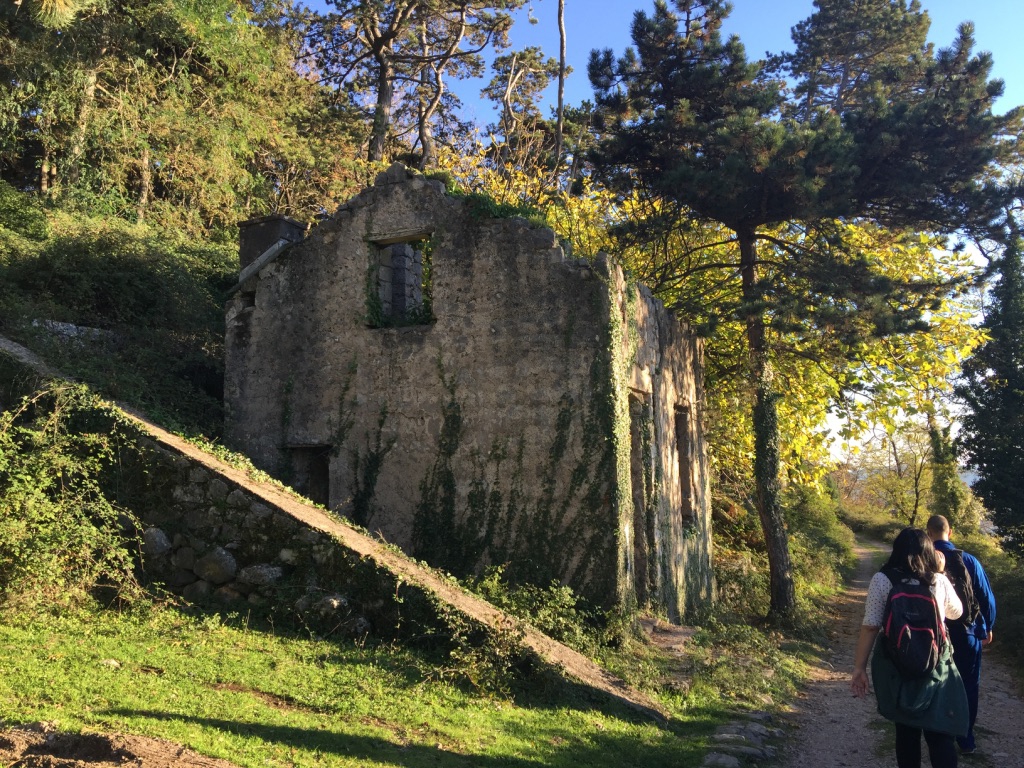 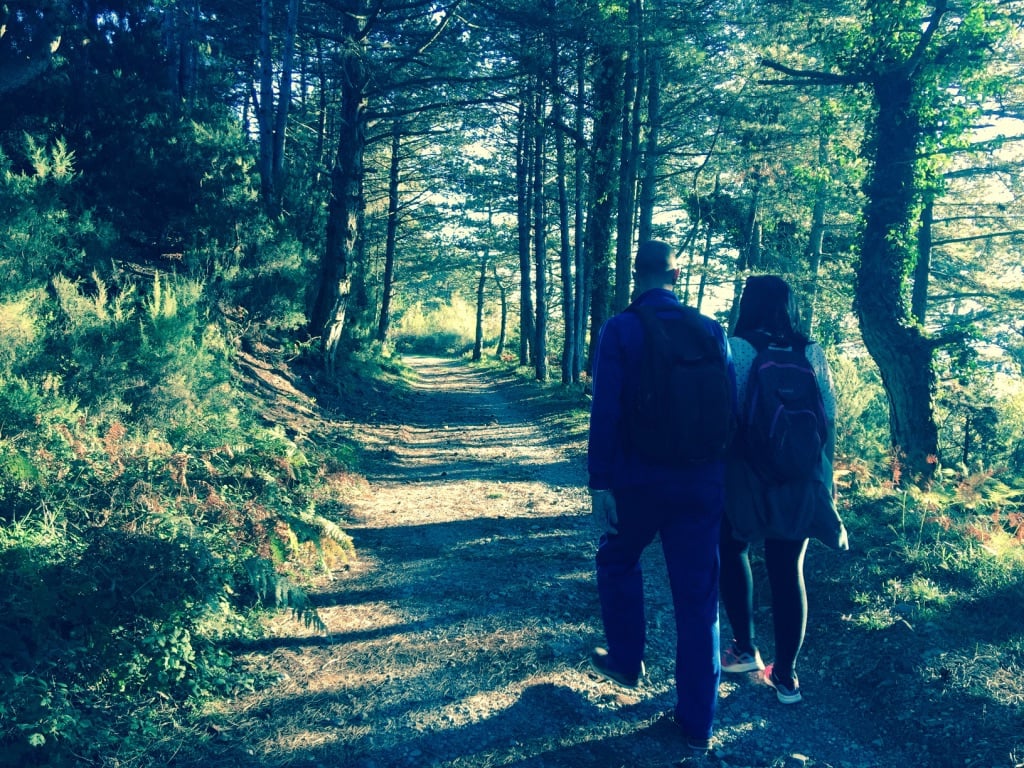 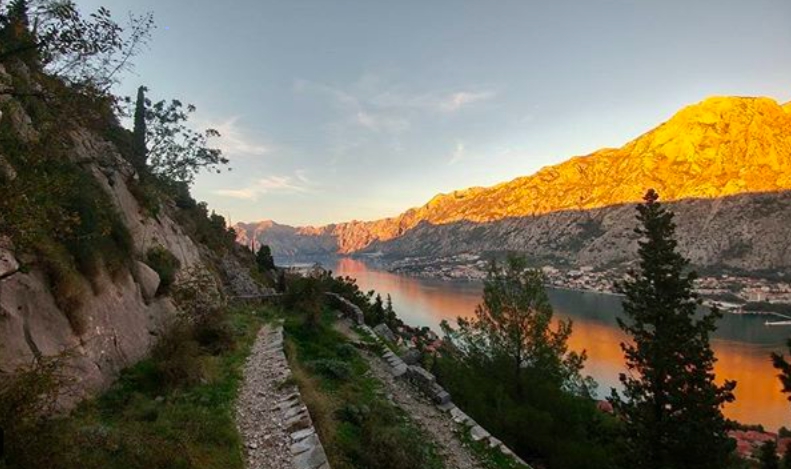 Overall, this was an intermediate hiking trail, so bear this in mind once you decide to go! Other than this, you should bring an extra layer of the clothes, just in case of a breeze in the late autumn. Also, don't forget to bring some snacks and water. If you have all of this, you are ready to go and to enjoy an amazing experience! Kotor never lets you down.

Facts:
Vrmac elevation - 1671 m
Length of the path - around 9 km in one direction
Best time to go - autumn or spring