Christmas is one of the happiest holidays in the Christian tradition, as it symbolises the birth of Jesus Christ, who is considered the Son of God, and his descending to Earth. For the first centuries of Christianity’s existence, Jesus Christ’s birth wasn’t celebrated at all. Although most historians believe that the range of Jesus' birth could be from 7th to 2nd BC, his birth date has been still unknown because there is little information about his early life. Since the New Testament does not say when Jesus was born, the first Christians did not celebrate Christmas. In that time, the most significant religious holiday was Epiphany, which commemorates the arrival of the Magi after Jesus’ birth, and Easter, which celebrates Jesus’ resurrection.

The first official mention of honouring Jesus’ birth was in the era of Emperor Constantin, in 336 A.D. To this day, it remains unclear why Christmas is celebrated on December 25th. The prevailing opinion is that the birth of the God of Sun was celebrated in mostly pagan Rome on the same date so the church wanted to suppress this pagan holiday, and they began to celebrate Christmas.

Since the Middle Ages, the practice of celebrating Christmas has spread around the world and replaced pagan ceremonies. The birth of Christ in the Bethlehem cave is celebrated on December 25th, so this date, with differences in calendars, is respected throughout the whole Christendom.

Celebrating Christmas in Montenegro is an extremely important part of the tradition of every Christian, and it is considered to be the most joyful holiday of all. Maybe you don’t know it, but here in Montenegro, we celebrate two Christmases, one in December, and one in January. Although the dominant part of the Montenegrin population is Orthodox Christians, there are also Catholic Christians (around 3,5 %). As Orthodox believers (followers of the Eastern Orthodox Church) celebrate Christmas on January 7th, according to the Julian calendar, Catholic believers (followers of the Roman Catholic Church) celebrate it according to the Georgian calendar on December 25th. 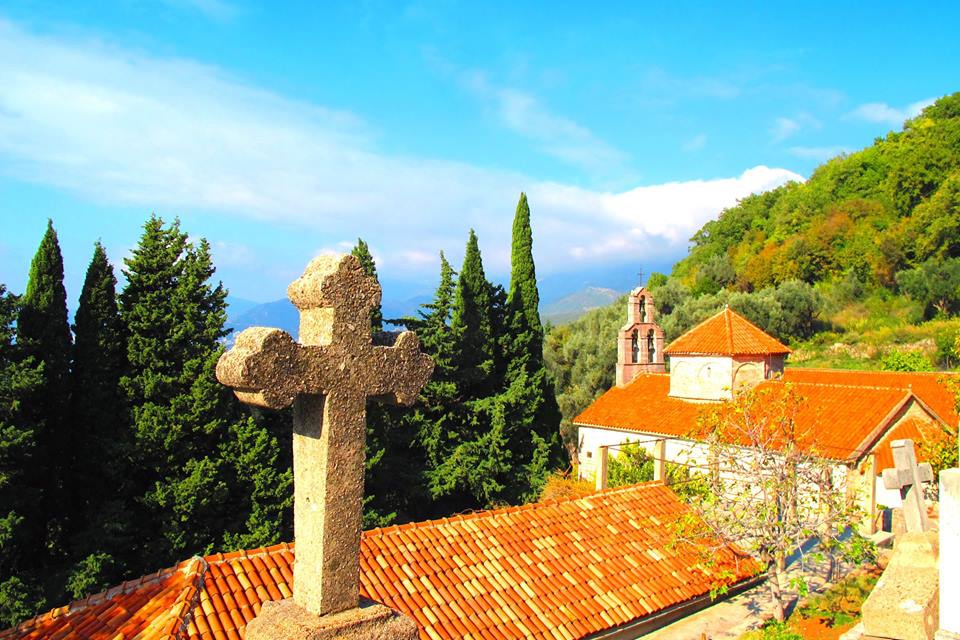 Even though the dates differ, the tradition is similar and during the Christmas holidays all schools, businesses, and public administrations are closed. For us, Christmas is all about spending time with family and friends, while feasting and celebrating. Many customs and traditions are being passed from generation to generation so Christmas can be celebrated in many ways. 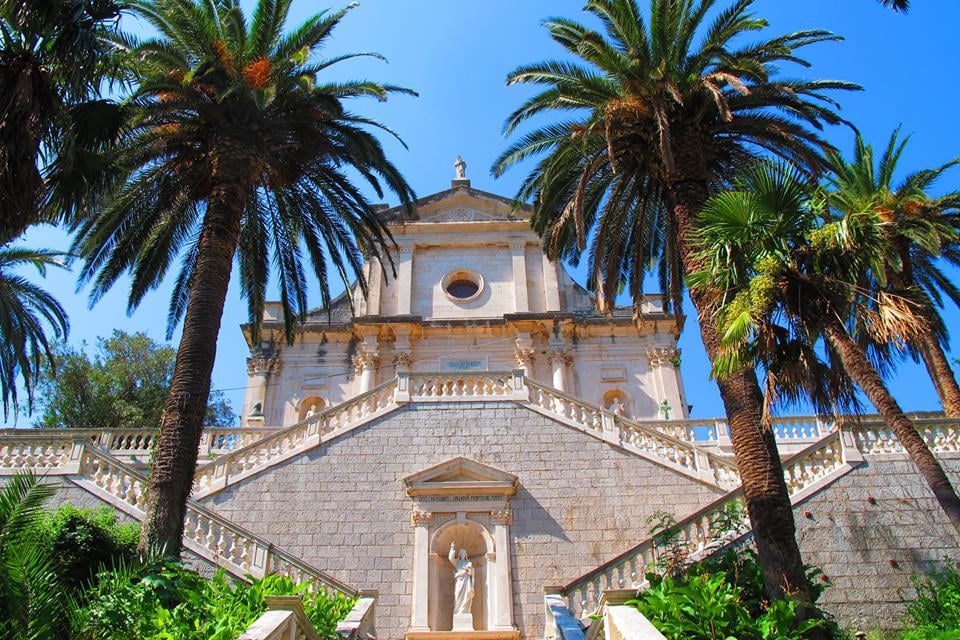 Catholic Temple dedicated to Our Lady in Prcanj, city of Kotor

For Orthodox Christians, the Christmas celebration starts on January 6th, or Badnji dan (Christmas Eve), and during this day families prepare for Christmas. Usually, early in the morning before the sun rises, the male members of the family go to the woods and cut a type of Yule Log or 'Badnjak' (Christmas Eve tree), most usually from an oak tree.

Badnjak signifies the tree that the shepherds brought and that Joseph ignited to warm up the cave where Jesus was born. It also symbolises the tree from which the cross on which Christ was crucified, was made. Badnjak is brought into the house on Christmas Eve evening, by a male member of the house, accompanied by numerous rituals like sprinkling their heads with rice or wheat. It is meant to burn through the evening and night, symbolising the light and the heat that bonds the family members.

After this ritual, members of the family pray, sit down for a festive dinner and enjoy delicious food prepared for the celebration of Christmas Eve. Under the dinner table, the floor is covered in straw, to represent the cave in Bethlehem in which Jesus was born. People fast on Christmas Eve, because it’s the last day of the 40-day fast, so dinner will be meat-free and dairy-free. Beans, fish, and potatoes are usually served, and of course, the inevitable Montenegrin priganice, which are made of bread dough and are served with honey or jam. 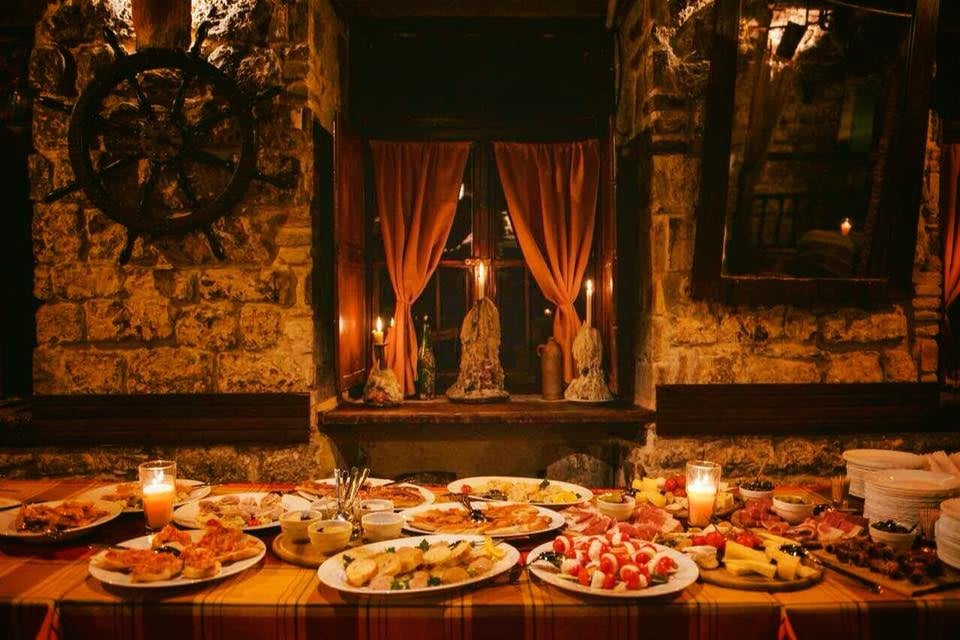 Besides family gatherings, every year large bonfires are being organised by the Montenegrin Orthodox Church and Serbian Orthodox church, in front of their main temples. People are gathering in the early evening on Christmas Eve, to celebrate and light up the Badnjak trees. Don’t be surprised if you hear gunshots, because here it’s a normal way of celebrating the burning of the Badnjak (or anything in general). Later, the Holy Liturgy/Mass is organised at midnight and also in the mornings, when the liturgy is served. 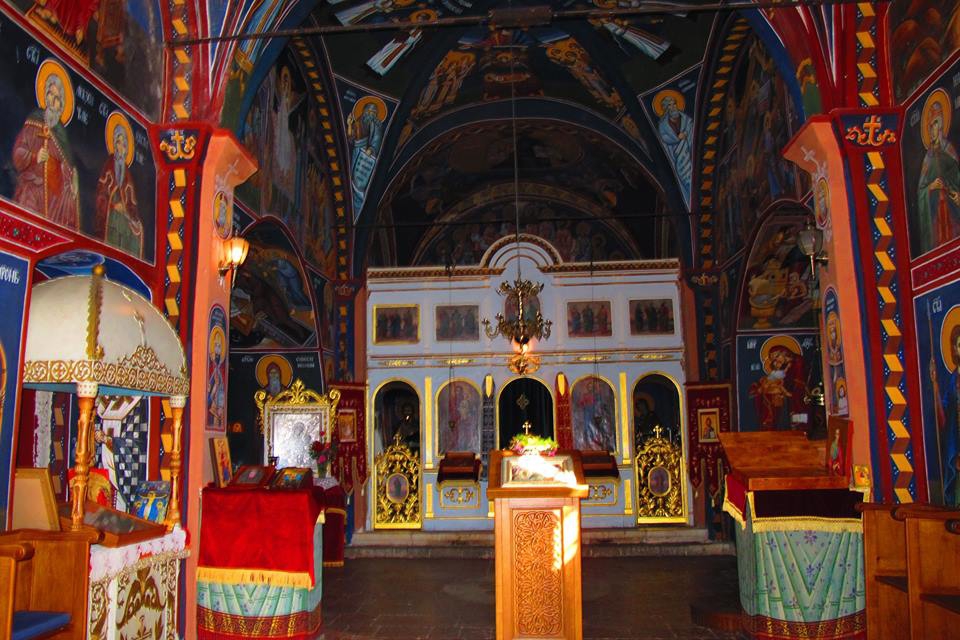 Christ is Born! - Truly is Born!

Christmas starts early in the morning with people greeting each other by saying 'Hristos Se Rodi!' (Christ is Born), followed by the reply, 'Vaistinu Se Rodi!' (Truly is born). According to the tradition, the first person who comes into the house on Christmas morning must be a male or 'polaznik'. It is believed that 'polaznik', by stroking the fire made by the Badnjak tree, will bring luck, wealth, and blessings into the home. Polaznik symbolically represents the Three Wise Kings or Magi, who followed the star from the East and came to the newborn Christ, with gifts. Polaznik is also symbolically greeted with gifts, after which he enjoys the rich Christmas feast of homemade dishes that include roasted pork, lamb, Njeguši prosciutto, cheese, different kinds of sweets, wine, and brandy (or rakija).

'Česnica' is a special type of bread made from the most simple ingredients (water, fat, and flour without yeast) and it is made only for the occasion of Christmas. During breakfast, it is divided into as many parts as there are family members. A silver or gold coin is placed inside the bread, which symbolises the gift to the baby Jesus, and it is believed that the person who finds the coin into his piece of bread, can expect prosperity and wealth during the upcoming year. 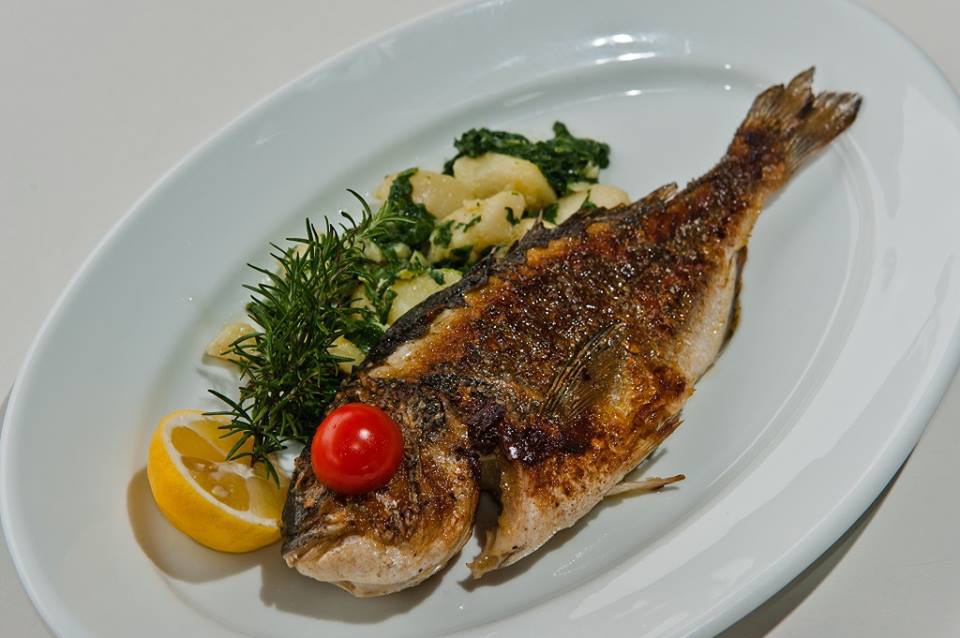 Traditional Meal at the Christmas Eve 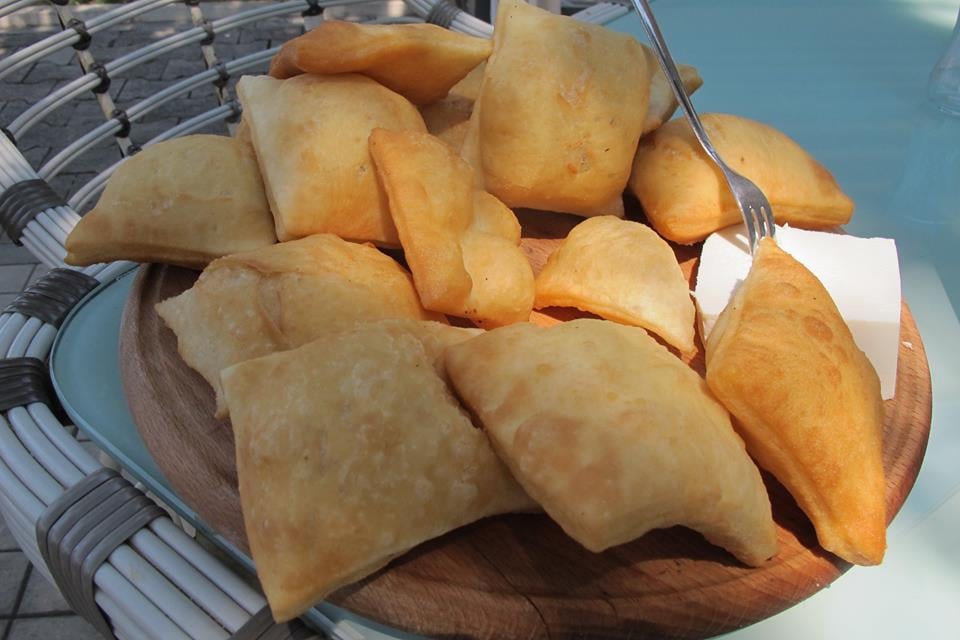 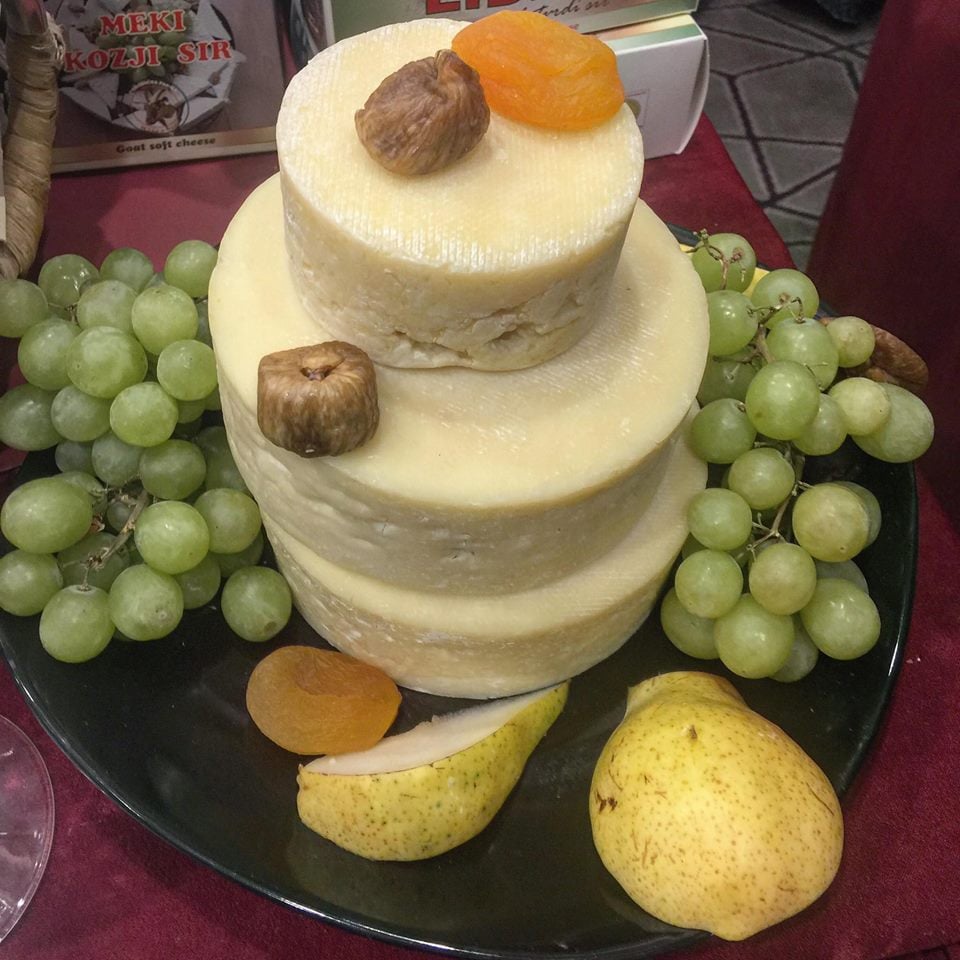 "Christmas is a family holiday and is celebrated within the family circle. It is believed that on that day, all those who have been in quarrels and disputes, should forgive and reconcile."

For Roman Catholic Christians, Christmas is also preceded by the 40-day xerophagy. The journey of the Magi from the East, lasted for 40 days, the same as the Christmas fast lasts, which ends with the beginning of the Christmas celebration on December 25th, which do not differ very much from the Orthodox Christmas Celebrations here in Montenegro. The most joyful holiday, Catholics celebrate with friends and family, organising family dinners and enjoying savoury food while exchanging gifts.

On Christmas Eve, it is a tradition to come to bow at the improvised Christmas tree cribs in the temples and churches; this custom is a remembrance of the gift of the Magi to baby Jesus, who according to tradition, arrived in Bethlehem following the brightest star that stopped precisely above the cave of his birth. On the second and third day of Christmas relatives and friends go to visit each other.

Symbols of the Christmas celebration of the Roman Catholic are the cribs in which Christ was born, an everlasting green Christmas tree, and an advent wreath. The Advent wreath is woven from straw and pine twigs, decorated with purple ribbons, and has four red candles as in four weeks of fasting, which are lit one by one, every Sunday before Christmas. The Catholic Church serves the Holly Mass at midnight between December 24th and 25th. 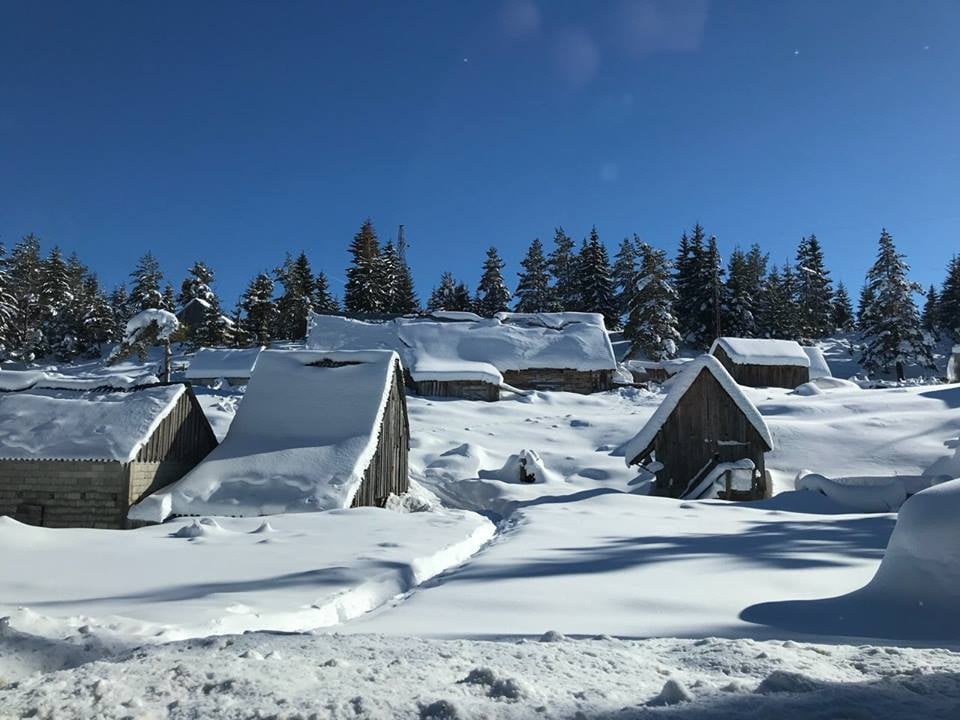 Christmas is about spending time with family and friends. It’s about creating happy memories that will last a lifetime.