Interview with the founder of folklore ensemble from Kotor, Mr Predrag Susic

Since we enjoy Boka Kotorska as a team, we are always super interested to present you as much as we can about it, as we truly believe it is one of the must-visit spots in our very beautiful country.

This time, we had a pleasure to talk to Mr Predrag Susic who is the founder of the folklore ensemble 'Nikola Djurkovic' from Kotor as well as one of the idea creators and an active member of the Association of the Folklore Ensembles in Montenegro (UFACG). Besides, he is among very few people today who is actively researching the cultural heritage of Boka Kotorska, trying to keep it alive, and we are really looking forward to his book 'Da Nam Kolo Ne Zastane' which is about to be published. 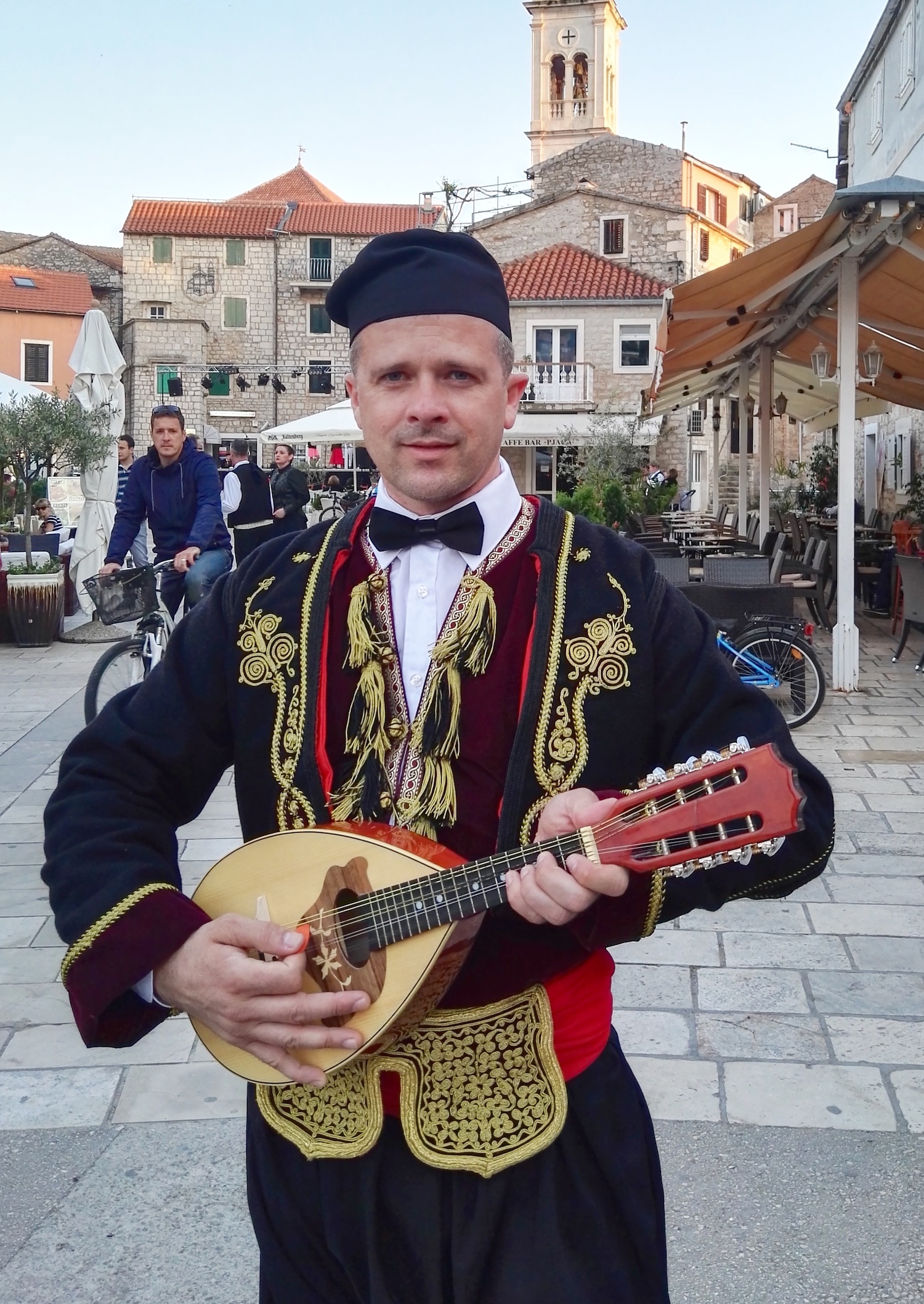 Predrag Susic, Founder and Choreographer of the FS 'Nikola Djurkovic' from Kotor


Read more about the work of the ensemble as well as the Boka Kotorska customs and tradition in the interview below.

MGM: Since when does your engagement in the Boka Kotorska folklore date and how long have you been studying its cultural heritage?

P: When people ask me for how long have I been in the world of folklore, I always say - my whole life! From my earliest days, I was involved in the folk customs of the annual events that took place in my environment and among family members. Active involvement in folklore dance began in 1982 in Folklore Society 'Boka' in Tivat. In 1994, I left to study in Novi Sad and there I became actively involved in the work of FS 'Svetozar Markovic', where my interest in folk dances, songs, costumes and tradition has grown. At the beginning of 1999, I returned to Tivat and took over the FS 'Boka'. I improved my work by starting an intensive study of the cultural heritage of the Bay of Kotor, back in 2004.

In the period from 2004 until today, I did a large number of field researches and communicated with the elderly inhabitants of the Bay of Kotor, where a lot of information was obtained related to the customs, folk dances, songs and costumes of the Bay of Kotor. Some of the data weren't available in the existing literature and this is of great importance for the further development and interpretation of the cultural heritage of the Bay of Kotor.

In the same period, I met and started intensive cooperation with the most eminent experts in this field, led by ethnomusicologist professor PhD Zlata MarjanoviÄ, who still represents one of the pillars in my work.

Later on, organised by the Association of Folklore Ensembles of Montenegro, two professional seminars were held on the topic of games, songs, costumes and customs of Boka Kotorska, where I was a lecturer (in 2011 and 2019). Besides, within the Ethno-camp KolaÅ¡in, I have been presenting Boka Kotorska folk heritage to the participants who are students of ethnological faculty departments from the ex-Yu area, leaders of folklore ensembles and representatives of various ethnological institutions.

My book 'Da Nam Kolo Ne Zastane' is in the final phase, which will contain detailed descriptions of folk dances from the area of ââthe Boka Kotorska, but also descriptions of characteristic folk customs, costumes and songs. I emphasise that the literature on this topic is very limited and that the book will be a real refreshment and I hope the basis for further promotion of the rich cultural heritage of the people of Boka Kotorska. 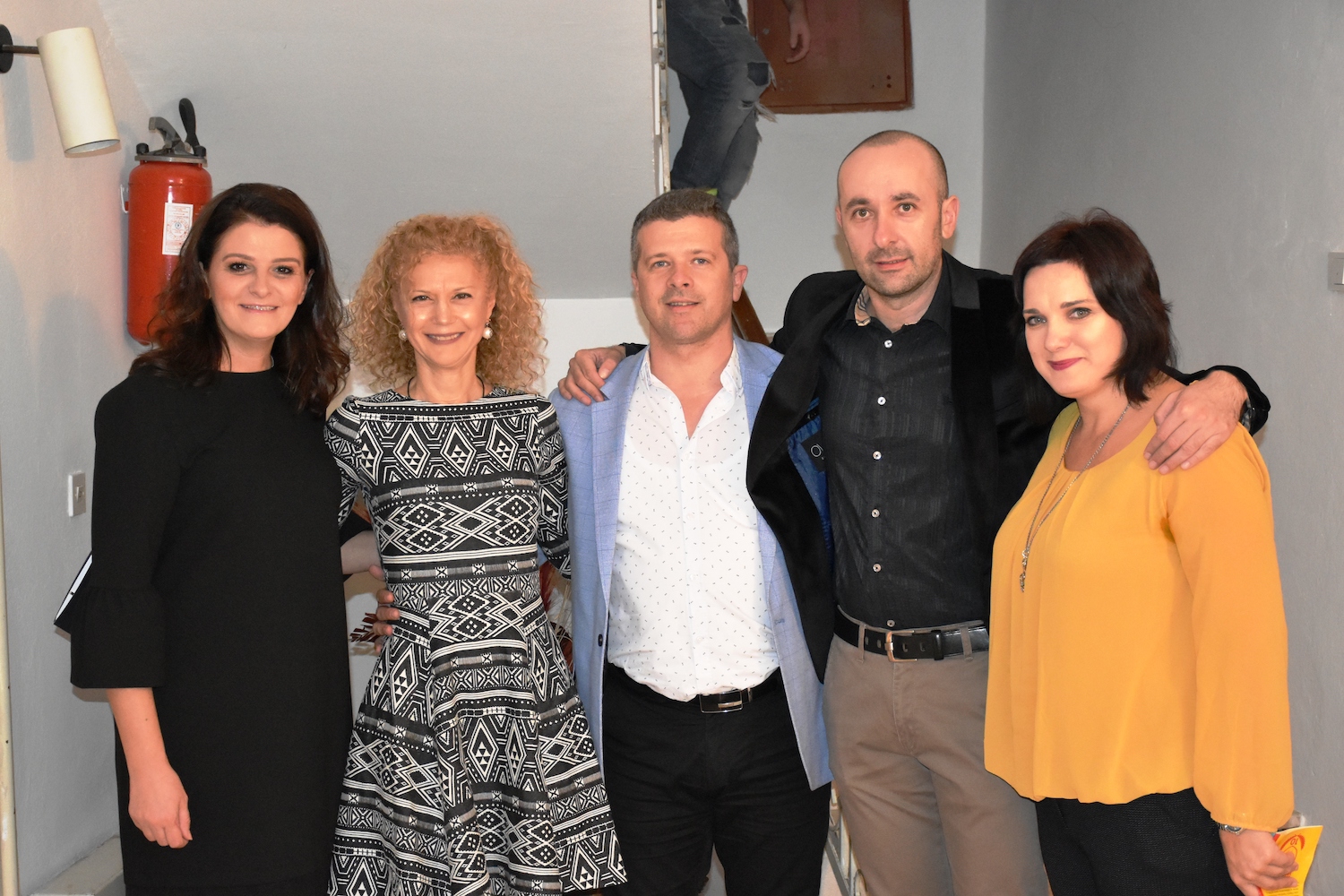 Mr Predrag Susic with colleagues
MGM: When we talk about the Boka Kotorska area, are there visible differences in costumes and games and from what do these differences depend on the most? Is it time, origin, religion - how would you define that?

P: When we talk about the Bay of Kotor (Boka Kotorska), we must look at the geographical and historical facts that undoubtedly speak of the value and importance of this area. Throughout history, the geographical position has dictated that the world's greatest emperors, for which the Bay of Kotor was both strategically and culturally important, have ruled in this area. Influences on folk dances, songs, customs and costumes were different, depending on the regions within the Bay, activities of the population, migration, etc. The greatest influence, of course, came from the areas which bordered Boka Kotorska, such as old Montenegro, Herzegovina and Dalmatia. The influence of these areas is very visible in folk costumes (especially among poorer part of the population), folk dances, songs and customs. 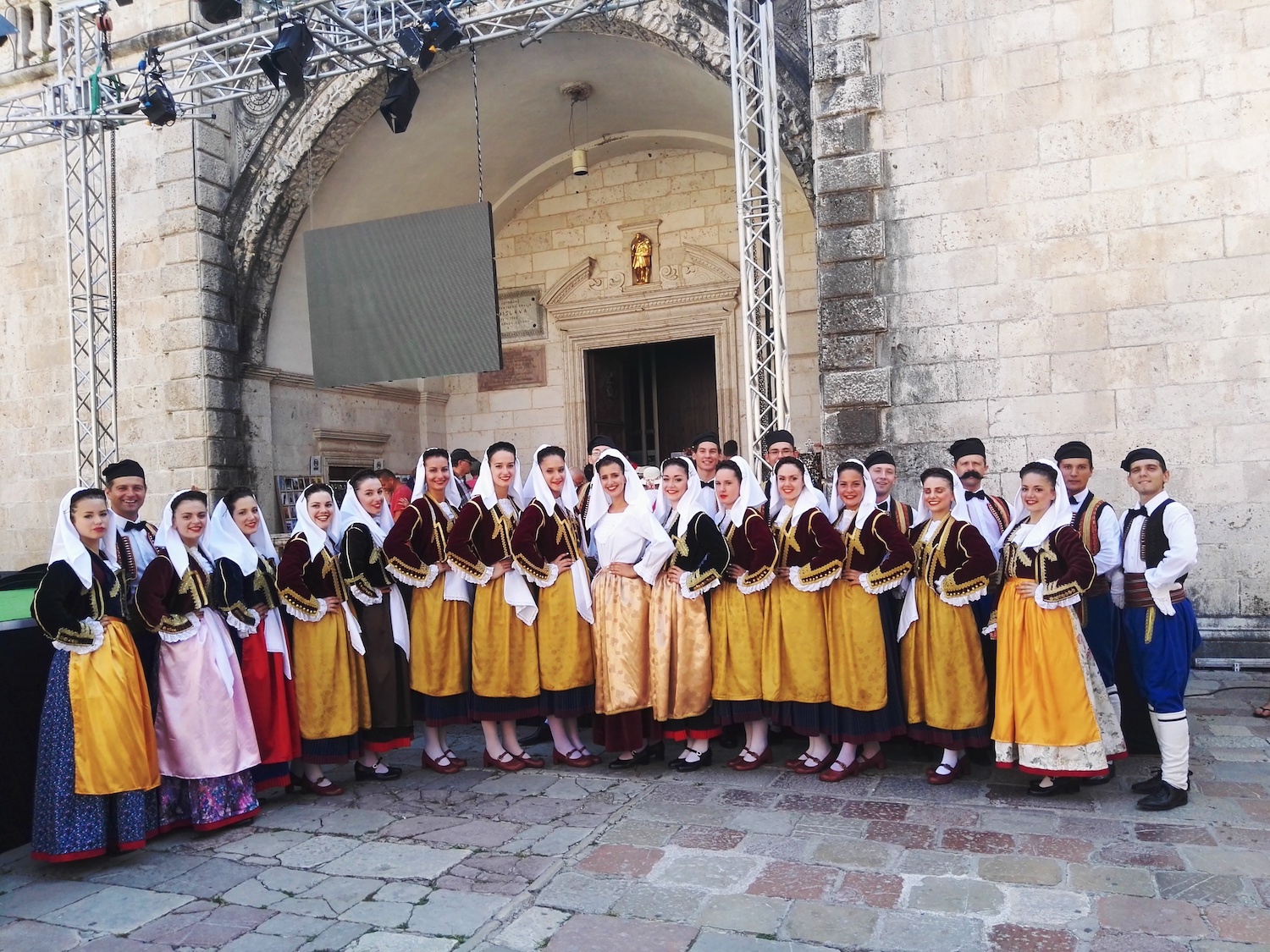 Among women and girls, the wealthier wore apparel that did not differ much from the wardrobe of the then European palaces, and the most specific is the so-called benevolent costumes. The poorer ones wore folk costumes similar to the women's costumes of Herzegovina and old Montenegro, back then.

If we talk about the basic elements of these costumes, in the uniform of the Boka Navy, there are a hat, a shirt, jeÄerma, koret, Äemer, pas, Äese, pants, bjeÄve, shoes (crevlje), as well as the inevitable jewellery and weapons. In the second type of men's costume, which was much more common among the people, parts were a hat, a shirt, dzamadan, pas (belt), underpants, socks (gete), and sandals or shoes were also worn.

Women's costume from Dobrota (part of Boka Kotorska) consists of petaruliÄ, bram, Å¾upet, shirt (kamiÅ¾ola), traversa, belt, bjeÄva, shoes and jewellery, while the other type of costume had a hat or scarf, shirt, dolaktica, skirt, belt, socks and sandals (opanci). 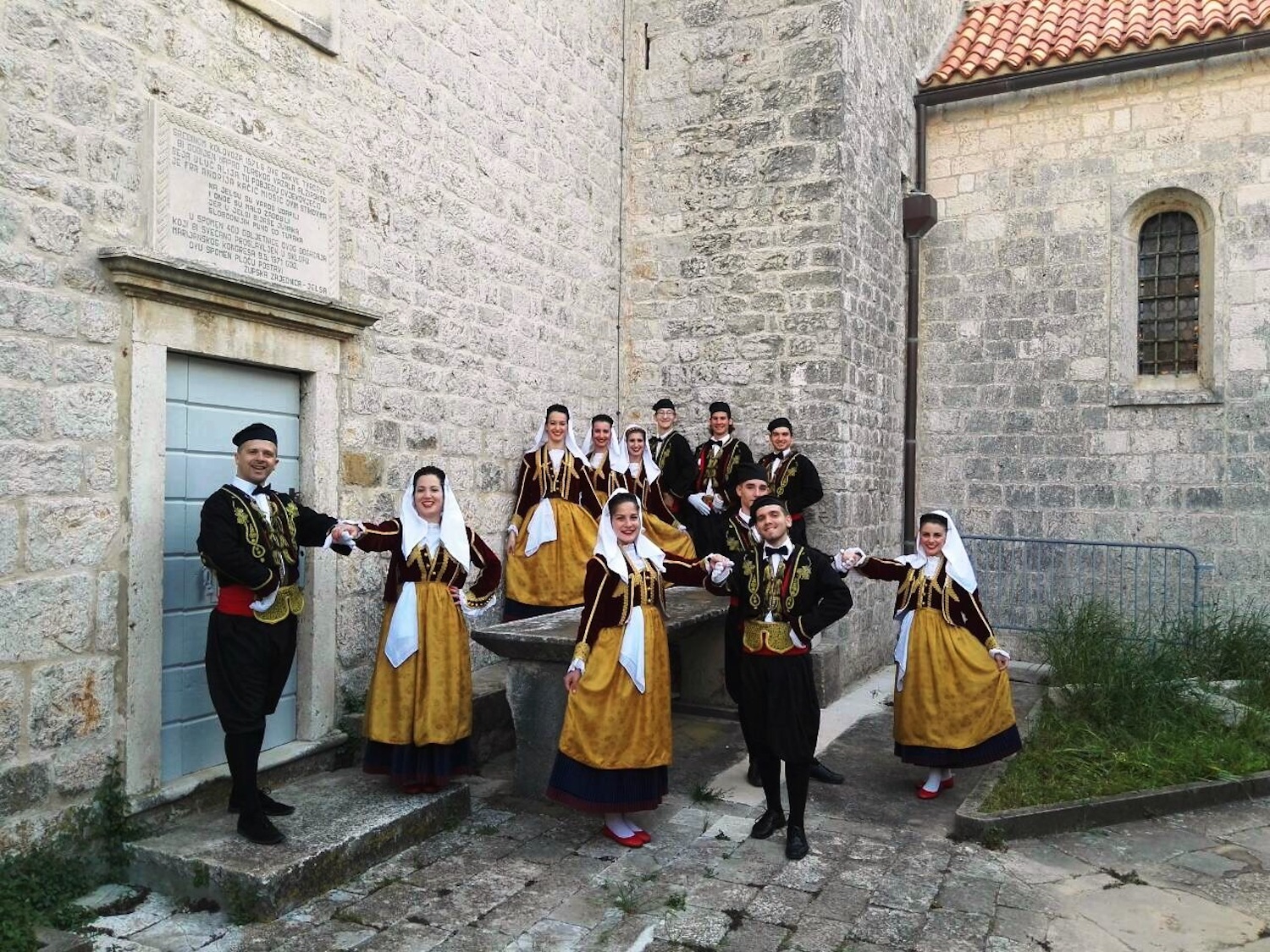 
MGM: Does the costume of the Boka Navy represent the typical appearance of the members or, is it an artistic expression? Since when the BokeÅ¡ko Kolo (The Wheel of Boka Bay) dates?

P: The costume of the Boka Navy is, in fact, the uniform of the Boka Navy. Like everything throughout history, it developed and changed. What is certain is that the current appearance of the uniform has a very great Venetian attire influence. Given that the Boka Navy was a very large and rich merchant fleet with extremely wealthy members, it is realistic that they could dress according to the most modern and demanding standards of their time, and hence the elegant look of this costume.

The Wheel of the Boka Navy (Bokesko Kolo) or the Ring of St. Tryphon is a very old ritual game that dates back to 809 when the relics of St. Tryphon were taken over by Venetian merchants. The people say that this dance was played for the first time back then. In the past, this dance was played only on the occasion of the Day of Saint Tryphon, and today it is also played on the Day of the Statute of the Boka Navy, the Day of the Municipality of Kotor, but also on some other special occasions. The wheel is exclusively male and consists of 12 different figures. Today, it is performed to the accompaniment of city music, and throughout history, it has had different types of accompaniment.

'Kolo' (wheel) is on the list of intangible cultural assets of Montenegro, and it was nominated for the list of World Intangible Cultural Heritage. 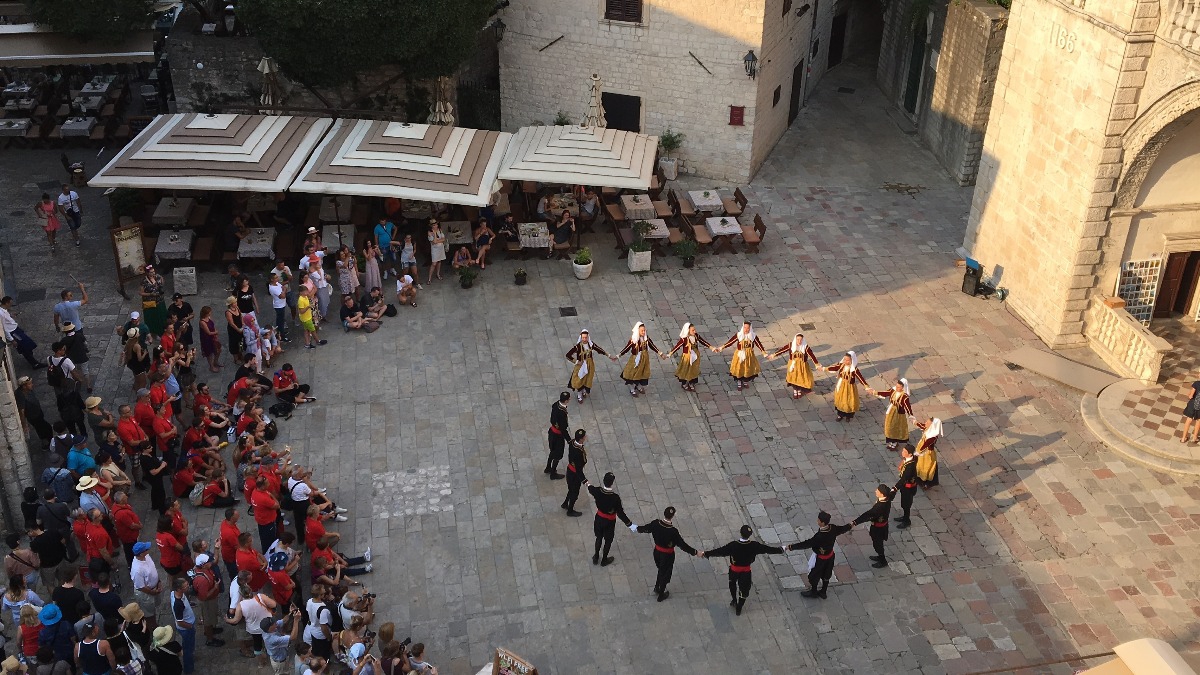 MGM: As the leader of the ensemble "Nikola DjurkoviÄ", what would you say prevails in the presentation of your ensemble at public appearances, when it comes to Boka Kotorska heritage?

P: Folklore ensemble "Nikola ÄurkoviÄ" from Kotor, which I founded and am managing it, in its rich repertoire inherits a large number of games, songs and customs from the wider Balkans, but emphasises the promotion of folklore art of Boka Kotorska and Montenegro. This relatively young ensemble, founded at the end of 2009, inevitably shows Boka Kotorska's plays and songs at all the performances it organises.

I fully dedicated myself to the work within this ensemble in 2015. From then until today, there have been numerous awards for the work and we worked a lot on the overall quality of the ensemble. Today, the ensemble is recognisable, it is one of the examples of good practice in folklore ensembles of Montenegro because the ideas, activities and visions go beyond the local approach and heritage.

There is a wide range of projects that we have realised or are still realising, and among others, I will emphasise what we are currently bringing old Boka Kotorska songs back to life in the most original way, without klapa (local acapella bends) or other arrangements, just simply as it was once sung by the people because we wish to preserve their uniqueness.

I want to point out that the "ÄurkoviÄs" (as people call our ensemble), before the time of the covid-19, used to have around 120 performances and concerts during the calendar year, for many years in a row. This data speaks enough about our active participation in the promotion of the culture of the Bay of Kotor and Montenegro. A large number of visitors of Kotor had the opportunity to see us at performances in the squares of the Old Town, where we showed the folk costumes, songs and dances of the Bay of Kotor in an authentic and beautiful environment. 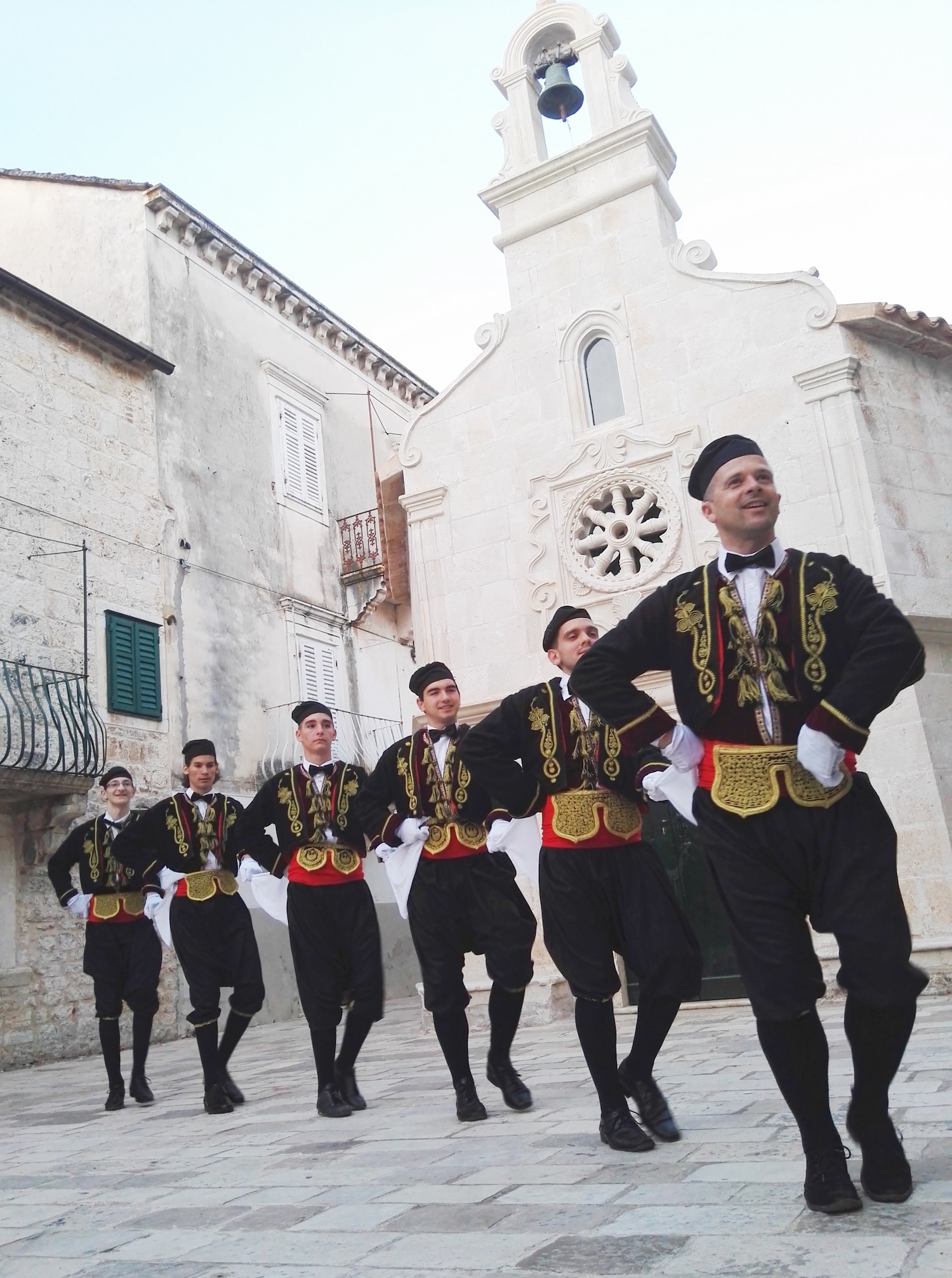 MGM: The ensemble, in addition to public, also offers private performances, which are very suitable for weddings, celebrations, introductions to our folklore. How can our readers get in touch with you if they want to arrange a private performance?

Of course, in addition to performing at festivals and various events, the ensemble also performs by request when it comes to folklore promotion to travellers and visitors, but also for private purposes. As part of our private activities and offers, we have included performances at weddings and celebrations with a special emphasis on the usual part where in addition to folk dances that used to be performed at weddings, we also perform original wedding folk songs and wedding customs. All of this, along with the inevitable folk costumes, looks extremely interesting, because, with all the advantages of today, we bring the charms of the past and our roots. The people accept it more and more because they understand that it is a part of our culture and tradition that we should be proud of and enjoy.

The ensemble is actively working and coping in various ways in this time of the pandemic, which has somehow disturbed us all. All readers can see more about the folklore ensemble "Nikola ÄurkoviÄ" from Kotor and our activities on our website or via social networks Facebook, Instagram or YouTube. Also, our mail is always active.

Thank you so much for your time, we look forward to one of your next public performances in the beautiful Kotor!
Written by: Andjela
PUBLISHED: Apr 22nd 2022